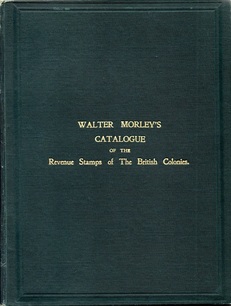 M Shimomura (ed), Standard Catalogue of the Japanese Revenue Stamps (Fukuo Ltd, 2003)
Note: despite being over 100 years old, Morley's catalogue (illustrated above right) is still one of the best listings of Mauritius and Seychelles revenues ever published.  Morley was the first to describe the different settings of the Crown CA watermark, making his listing more specialised than is required by the majority of revenue philatelists today.

Many thanks to David Beech and Paul Skinner at the British Library for their help and expertise, and for allowing me access to the Library's extensive Philatelic Collections including the Crown Agents Requisition books and proof material.

​When reproducing images of stamps not in my own collection, I have sought the permission of the current owner whenever possible, though in some cases the current owner is not known to me.  If I have inadvertently broken any rules of copyright, please help me to comply by bringing this to my attention.