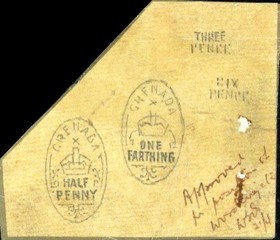 Notes:
1. The earliest recorded usage of this issue is the 1d cancelled 1914.  The 2d was probably issued later.  The other four values are recorded in the Crown Agents Requisition books (Req 3019), which states that the four dies were sent to Grenada on 18th May 1932.
​2. The values shown in brackets are known as essays but not as issued examples.
​3. Illustrated above right are hand-drawn essays of the ¼d, ½d, 3d and 6d on tracing paper.

Note: no issued examples are recorded of the dollar values, which are known only from the specimen sheet illustrated above.  This sheet was supplied in July 1973 by the Permanent Secretary of the Grenada Ministry of Finance, who stated that these impressed stamps were still in use at the time on documents such as conveyances and licences.
Labels

Note: L1/2 are known used in 1915 and were probably issued then or in 1914​.  The inscription on L1 refers to General Leman, who commanded the Belgian forts at the first battle of World War I - the Battle of Liège in August 1914.  Based on the dates inscribed on the labels, L3 and L4 were presumably issued in 1915 and 1917 respectively.

L11/16
1944.  Propaganda labels similar to contemporary postage and revenue stamps of Great Britain but incorporating Communist and/or Jewish symbols, overprinted LIQUIDATION OF EMPIRE GRENADA in rectangular frame.  Printed in Germany under the authority of the Nazi government. 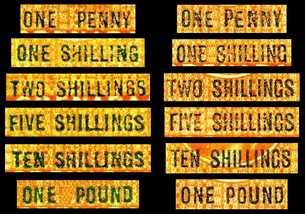 R21/24, with Large Star and Small Star wmks for comparison 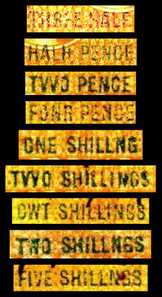 Plate varieties (see note 3)
Notes:
1. Examples of R21/24 can be found with a marginal watermark of parallel lines.
2. Illustrated above right is the R21 bisected on piece.  Such use was unauthorised and its status is uncertain.
​3. Numerous duty plate varieties are recorded from the 1875 and 1879 printings due to poor make-up and loose type.  Many of these varieties are relatively insignificant including irregular spacings and misshapen letters, but the following missing or substituted letters (some of which are illustrated at right) are worth noting: Morley additionally lists the following varieties which I have not seen: 1½d IENCE for PENCE, 2d TWC for TWO, 3d THRFE for THREE, 3d PFNCE or PENGE for PENCE. 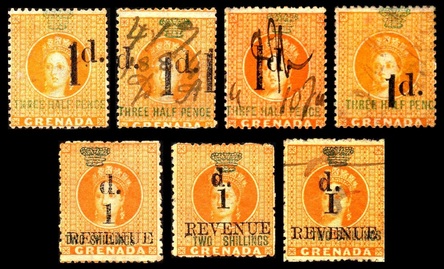 Notes:
1. The plate varieties found on R2 and R33 also exist on these surcharges.
2. ​Morley lists R41 with variety 'stop dropped' and Barefoot lists R42/3 with variety 'no stop after d' but I have not seen these.
3. Similar surcharges were produced between 1883 and 1891 with the overprint Postage or Postage and Revenue.  I have not seen any of these with revenue cancels.
​4. R41/43 were authorised for postage in 1887 and can be found with postal cancels. 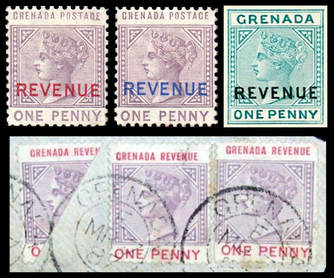 Notes:
1. Stamps in a similar design but inscribed Grenada Postage at top and overprinted REVENUE in capital letters (as illustrated above right) are essays.  A similar imperforate essay also exists in green but inscribed GRENADA (without Postage) at top.
2. The plate set-up with alternating upright and inverted rows means that inverted watermark is as common as normal, and that any vertical pairs or strips of this issue will be tête-bêche. Surviving tête-bêche pairs are know of all values to 2s.
​3. Shown above is an example of the ​1d value bisected on piece with postal cancels.  Such use was unauthorised and its status is uncertain.
​4. R51/61 were authorised for postage in 1887, and some values are known with postal cancels. 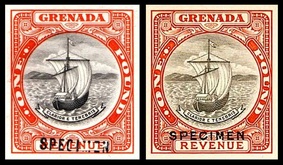 ​a) Wmk Crown CC (1904)
​  R71. £1 vermilion and green
​​
​b) Wmk Multiple Crown CA (c1910)
​  R72. £1 vermilion and green
​​
​c) Wmk Multiple Script CA (1927)
​  R73. £1 orange and green
​​
Notes:
1. The Crown CC and Script CA stamp (R71 and R73) are known with Specimen handstamps from the printer's archive dated November 1904 and December 1926 respectively, suggesting issue dates of early 1905 and early 1927.  The date of issue for R72 is unknown but it was certainly not reprinted after mid-1921 since no MCA printings are listed in the Crown Agents Requisition books.
2. Imperforate printer's samples exist in black and orange-brown with two different types of Specimen overprint as illustrated above right.
3. R72 is known postally used on piece, though this usage was probably unauthorised.
​​4. Essays dated 8th June 1903 with the Coat of Arms in centre rather than the Badge of the Colony exist both for the £1 and for an unissued £5 value in green and violet.  Another £1 essay similar to the issued stamp but with an ornate inner frame was prepared on 11th September 1903.  The three unadopted essays are illustrated below. 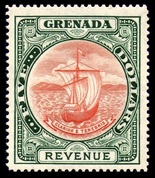 2c on 12c fantasy
​Illustrated at right is a fiscally used example of the Queen Elizabeth 12c postage stamp with a forged 2c Revenue surcharge.  This was first reported by Duston in 1991.  Examples are believed to emanate from the collection of Jim Czyl (1947-2014), a noted figure in cinderella philately who produced labels and occasionally created bogus revenue stamps.
1965 (according to Barefoot).  Postage stamps locally surcharged with the figure 2 in two different fonts, and two horizontal bars cancelling the original face value.

​Notes:​
​1. R81 and R82 both come from the same sheet and can be found se-tenant.  Type A occurs 38 times and type B 12 times in the sheet of 50, as shown on the sheet diagram below.
​2. Inverted surcharge, double surcharge and double inverted surcharge errors are known, as well as surcharge omitted on one stamp of a se-tenant pair.  It seems likely that these may have been created by favour. 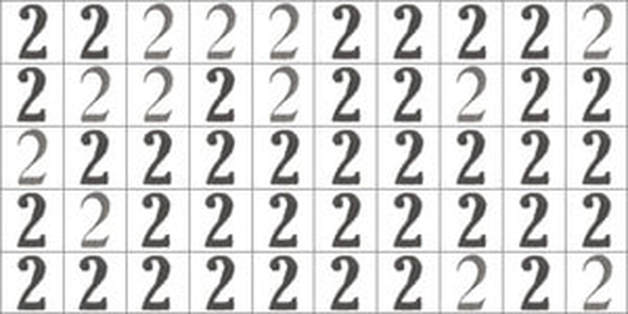 R81/82 sheet layout diagram
Revenue usage of Postage stamps
Note: for ease of reference, numbering follows the Stanley Gibbons Part 1 catalogue throughout this section.  Values listed here are those recorded as having been used for revenue purposes.


Printers: all Grenada postage and revenue stamps from F49 to F134 were printed (typo) by De La Rue except where otherwise indicated. 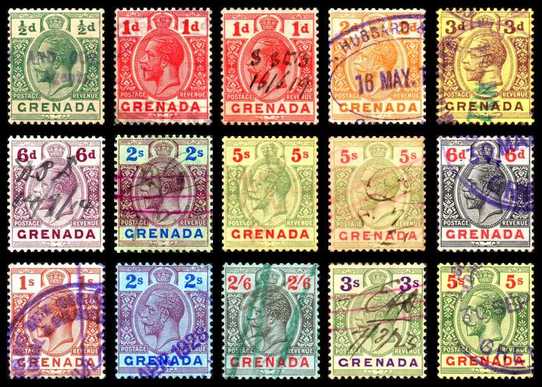 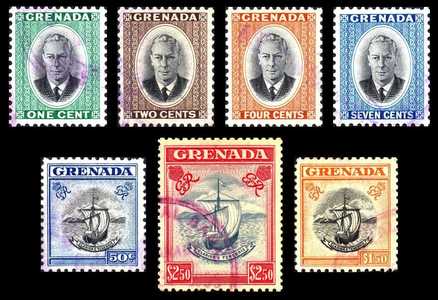 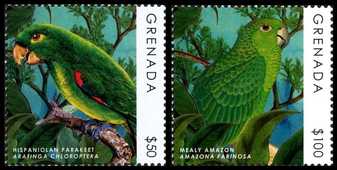 F901/2
2013.  Parrots.
​
F901. $50 multicoloured
​  F902. $100 multicoloured
​
Note: these stamps are the top values of a series of 13 issued on 21st October 2013.  The lower values (25c to $10) presumably served postal requirements but the high face values of these two stamps make it likely that they were issued for revenue purposes.  I have not seen a used example, either postal or fiscal.
Previous page: Dominica
Next page: Jamaica
Back to West Indies main menu