including issues for the Federation of South Arabia

The southern part of Yemen (including the Colony and Protectorate of Aden) was under British control from the 1930s until independence, and subsequently became known as the Federation of South Arabia (1962-67), the People's Republic of South Yemen (1967-70) and the People's Democratic Republic of Yemen (1970-90).  The northern part was a kingdom from 1918 onwards, and was then known as Yemen Arab Republic from 1962 until 1990.  A new constitution to unite north and south was drafted in November 1989, and the united Republic of Yemen was declared on 22nd May 1990.

Listed on this page are stamps of the southern part of Yemen from 1962 to 1990.  Earlier issues are listed under Aden.

Special thanks to Joe Ross for providing a number of images used on this page. 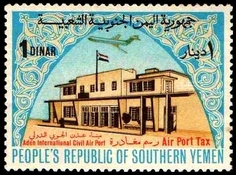 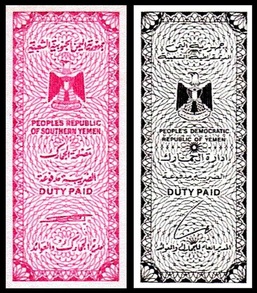 Note: no issued examples of these labels have been recorded to date.  The only known examples are the printer's proofs illustrated above plus a proof of X2 in the issued colour.  Each proof is mounted on an approval card with a dated signature to show when the designs were approved for printing.  The cards are dated 16th December 1968 for X1 and 27th March 1972 for X2.
Immigration Passports

P5 proof (image from Robson Lowe)
Notes:
1. Coloured proofs mounted on Bradbury Wilkinson cards are recorded for the 500f value and for the background only.  The proofs were approved in April 1968.
2. The 5d has not yet been recorded as an issued stamp without surcharge, though a proof exists as illustrated here.

One printing of all five values (Req 6/62191/2) is recorded in the Crown Agents Requisition books.  The date of dispatch is not recorded but would have been around the middle of 1968.

L1/2
1969 (earliest recorded usage).  Arabic inscription 100 fils contribution to the fund for the families of the martyrs and the mutilated.  51 x 28 mm.  Imperf.  No watermark.


​1979.  Dome of the Rock, Jerusalem.  Inscribed To the Welfare of the Families of Martyrs and Freedom Fighters of Palestine.
L14. 5f green, orange, yellow and deep ultramarine 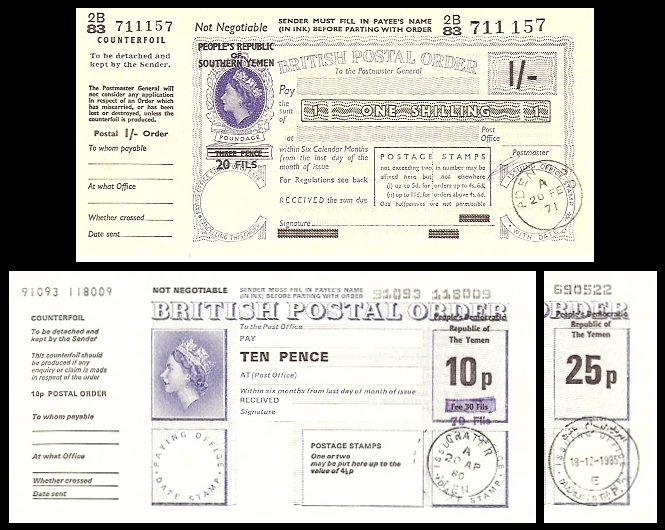 Illustrated above are three British postal orders overprinted for use in Southern Yemen.  The first order has a face value of one shilling, with the poundage of 3d surcharged 20 fils in local currency.  The other two orders show face values in decimal sterling currency, and were used in the 1980s.  British postal orders were issued in a wide range of values and it is likely that many of these were overprinted for Yemen.  Such items are not listed on this website but further information can be obtained from the Postal Order Society.
Revenue

Note: according to the Crown Agents records this was the only revenue stamp produced for the Federation of South Arabia.  There was just one printing of 5240 sheets (Req 5/25351/1), dispatched on 16th November 1965.  The stamp was presumably issued at the end of 1965 or at the beginning of the following year. 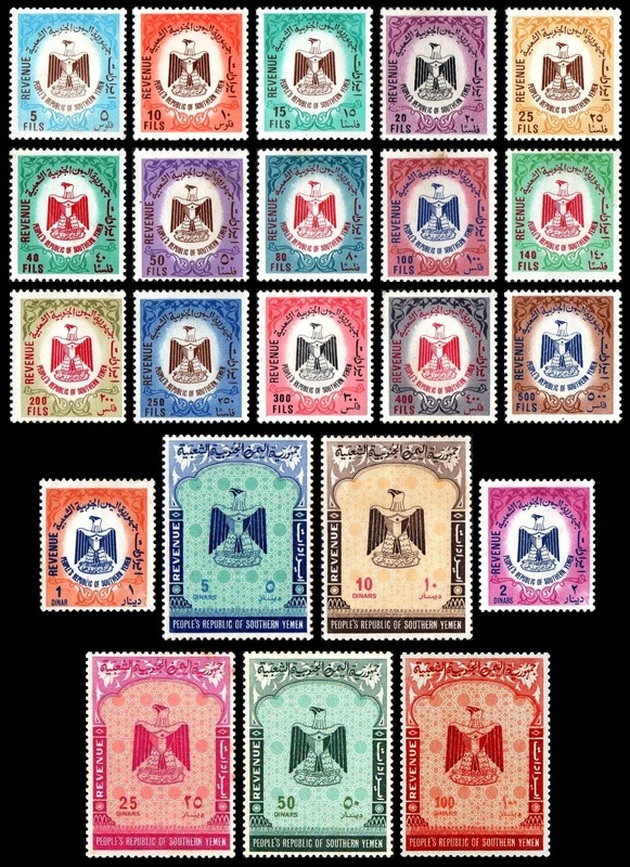 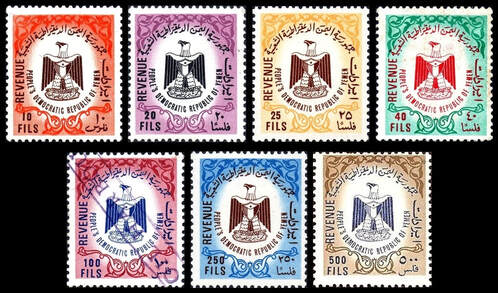 a) Small figures of value 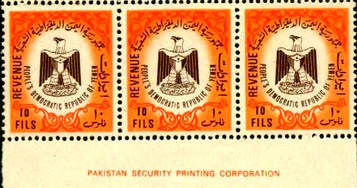 Note: the imprint block of R31 illustrated here shows that this was printed by Pakistan Security Printing Corp, but the reprints with larger figures of value (R41/48) may have been the work of a different printer. 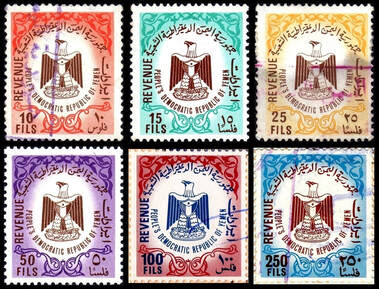 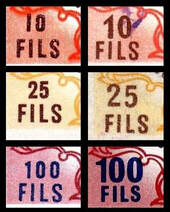 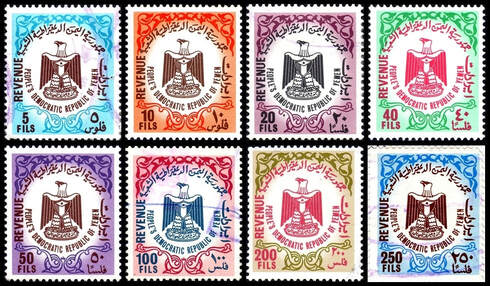 Note: for ease of reference, numbering follows the Stanley Gibbons catalogue throughout this section.  Values listed here are those recorded as having been used for revenue purposes. 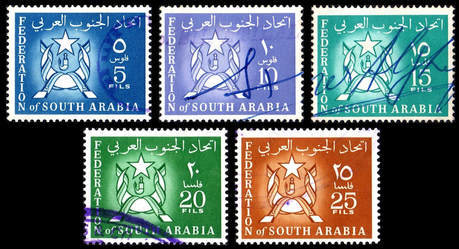 b) Stamps overprinted or inscribed People's Republic of Southern Yemen

SY1/5
1968.  Arms of the Federation series (see SA3/5 above) overprinted with new state name in English and Arabic.