Syria: An illustrated key to the different types used since 1939

This page is provided as an aid to identifying Syrian revenue stamps from Indepdence to the present day.  All stamps illustrated here can be found in the Syria chapter of the catalogue, which consists of two pages - the main listing and Syndicates and Charities.

This illustrated key page is arranged as follows: 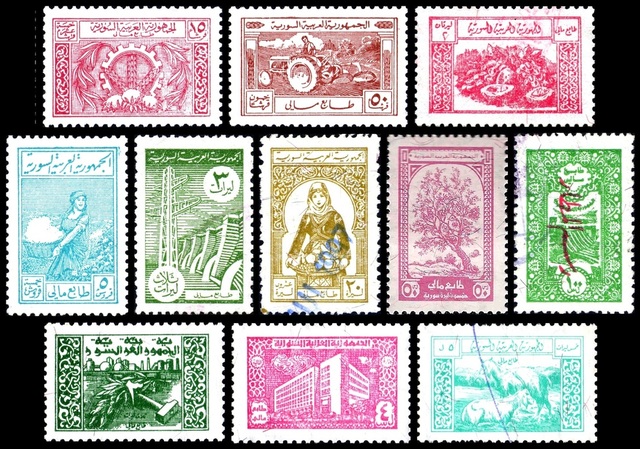 _These three pictorial designs are for Consular, Airport Tax and General Security respectively
For full details see under catalogue numbers C281/3, A91 and G355 on Syria main page

Lawyers' Syndicate issues for Damascus (two types) and for Hama, plus key type shared by Aleppo, Damascus and Latakia 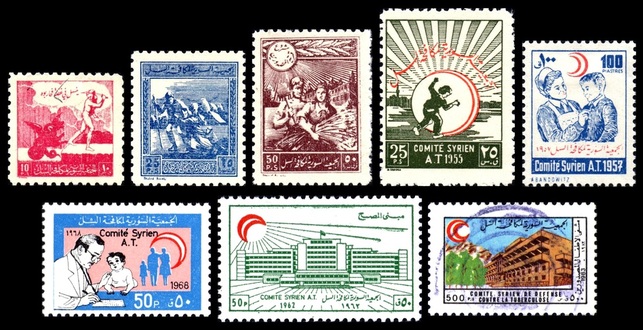 A selection of Charity labels produced by the Syrian Anti-Tuberculosis Committee - note: all Anti-TB issues except the 1953 series are easily identified by the French inscription COMITE SYRIEN A.T. (or similar), and also show the year of issue on the stamp


The stamp illustrated at left is a Charity label
for the Syrian Arab Red Crescent.
Stamps of this type are listed as TC10/11 on the
Syria (Syndicates and Charities) page
_2. The Harvester-Monument series (1930s-40s) 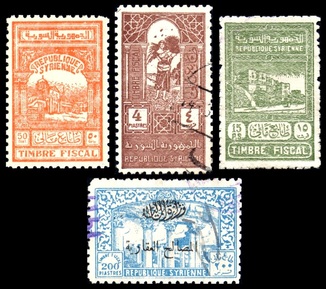 _The Harvester-Monument series (1930s-40s) is based on four different designs, all of which are inscribed République Syrienne Timbre fiscal (= Republic of Syria Revenue Stamp) in French as well as Arabic.  As unoverprinted stamps they are listed in the catalogue as Revenue R401/434 (Harvester) and R441/459  (Monuments).  They were also issued with a wide range of overprints for various purposes.

The 22 different recorded overprints are shown below.  The two varieties of Ministry of Finance overprint are shown first, then the remainder grouped by appearance: oval types, then straight-line overprints of one, two and three lines of Arabic.  Note: further overprints in Western letters only (S.A. and H.D.) are not illustrated here, but are listed under Sanjak of Alexandretta (Hatay) at the foot of the Syria main page.


a) Ministry of Finance control overprints

Both the overprints shown below read Ministry of Finance, and seem to have been used as a control or security measure.  These were used either on their own (see R461/480a under main Revenue listing) or in combination with other overprints (see under listing for the other overprint)
_

b) Oval or circular types

This section covers the various types of Syrian revenue adhesive which featured the Syrian coat of arms surrounded by Arabic inscriptions.  The initial issue was produced in 1949 for general revenue duty, using five different frame types to denote tiers of value - frame A being used for the lowest values of a series, B for the next few values, and so on.
Note: Duston mistakenly treats the different frames as different issues, and lists a number of stamps which in my view cannot exist, eg Revenue 10p in frames A and C.  These are footnoted in my listing.

The original Revenue issue was later overprinted to provide adhesives for other appropriations, then in due course the five original frames were reissued with modified inscriptions.

Arms
Three different versions of the Syrian coat of arms are used on these issues.  The original revenue series featured the Hawk of Qureish, holding a banner with the wording (in Arabic) Republic of Syria.  This was the national coat of arms until 1958, when Syria joined forces with Egypt to form the United Arab Republic.  At this time a new coat of arms was adopted featuring the Eagle of Saladin and a revised banner reading United Arab Republic.  This Eagle-type coat of arms is known on just one series of revenue stamps (the 1960-61 Notarial issue), presumably reflecting the relatively short life of the UAR.  These stamps are additionally inscribed Province of Syria below the banner to indicate that they were valid only in the Syrian half of the UAR and not in Egypt, which continued to issue its own revenue stamps.

The third version of the coat of arms is very similar to the original version but the banner has been amended to Syrian Arab Republic, which was the official name adopted by Syria after the union with Egypt was dissolved in 1961.  This final type also has the hawk slightly redrawn.

Each different appropriation has its own particular inscription in the main panel.  This is the box containing two lines of script towards the foot of frame types A and C, the long rectangular panel at the top of types B and D, and the circular disk at the top of type E.

'Revenue Stamp' inscribed on types A to C (top) or D and E
All stamps of the original Revenue issue are inscribed Republic of Syria in the main panel.  The words Revenue Stamp are inscribed within the value tablets on frame types A to C, or to the lower left and right of the coat of arms on types D and E.
The late types of adhesive have the appropriation name inscribed in the main panel, with no additional inscription (apart from the value) within the value tablets or beside the coat of arms.  The different types of main panel inscription are shown in the table below.

The original Revenue series was overprinted to produce adhesives for other appropriations.  The fifteen different recorded overprints are shown below.

Consular (top), Judicial (middle), Land (bottom)
Most of the overprints are fairly easy to distinguish, but three types are very similar to one another: the Consular, the Judicial and the second type of Land Fee overprints.  It seems that Duston may have conflated the first two types in his listing, since he does not mention the Judicial overprint and his drawing of the Consular has features of both.  He illustrates the Land Fee overprint (on a later issue) but treats it as another form of Consular overprint.

The left-hand portion of each overprint is enlarged here as an aid to identification.  Reading from right to left, they spell out qnsliyah (consular), qdaiyah (judicial) and ‘qariyah (land).

The principal differences are:

1. Horizontal stroke at left (Arabic y) is joined to the upright stroke in Consular but not in the other two.

2. The Judicial overprint has an additional dot (to convert Arabic s to d) above the central whorl.

3. The Consular overprint has an additional notch (Arabic n) to the left of the Arabic letter q, which the Judicial overprint does not have.

4. The Land overprint has a distinctive downward curl (Arabic r) towards the left-hand end of the overprint, which the other two types do not have.
4. The Agro-Industry series (1960s- )

The Agro-Industry series is a catch-all term for three different groups of designs which have been in use from 1960 to the present day: 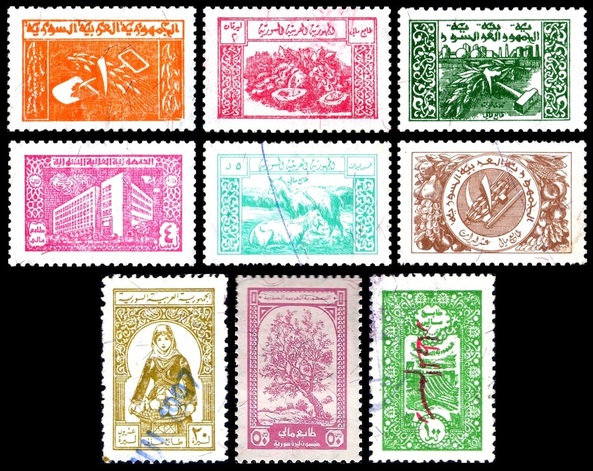 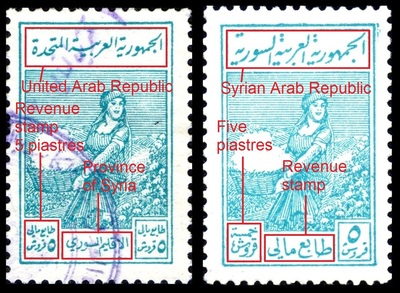 Harvester design used for 5p and 10p values
_
The first group of designs are inscribed either United Arab Republic Province of Syria (from the original 1960 issue) or Syrian Arab Republic (used from 1964 onwards).  The tractor type was also issued for judicial purposes with the inscription Judicial Fines at foot instead of Revenue Stamp.  These different inscriptions are illustrated here. 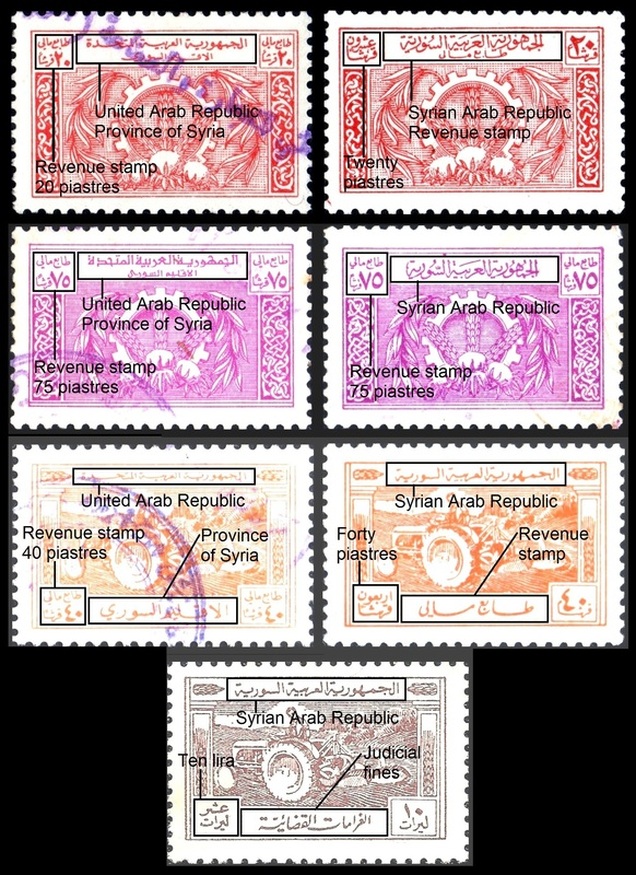 Note the two variants of the produce design: the 15p and 25p are inscribed as the 20p, the 1l as the 75p
_All stamps of the second and third groups are known only with the inscription Syrian Arab Republic Revenue Stamp.

Ten different overprints have so far been recorded on the Agro-Industry stamps, including two types each for Airport Tax and Land Fees.  All these types are enlarged here as an aid to identification.  (The images for the first types of Airport Tax and Land Fees are from Duston.)
See also:
Syria main page
Syria (Syndicates and Charities)
Middle East main menu
Home page