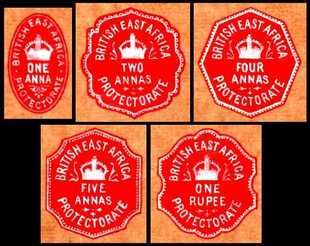 Artist's essays for BEA impressed revenue stamps
No impressed revenue stamps for British East Africa are known to have been issued, though a set of five artist's essays is known ex De La Rue archives.  The stamps, denominated from 1a to 1r as shown here, are individually hand-painted in vermilion with the lettering and design picked out in Chinese white.  Each essay is dated Jan 18th 1900.  It is possible that their issue was cancelled due to the imminent amalgamation of BEA with Uganda, which took place on 1st April 1901.
Judicial

Notes:
1. Stamps as J1 but overprinted in letters only 2¼ mm high in either orange or deep red are unadopted overprint trials, as shown above right.  The 4a and 1r values are also known with trial overprints in black.
2. Morley includes a 20r and 50r in this set, implying that these values exist with red overprint, but Hoffman (quoting a 1986 article by John Minns) notes that this is unlikely since they do not appear in the De La Rue archive.  Both values are known with local black overprint (see J16/17).

Note: Barefoot also lists the 3r value similarly overprinted but I have not seen this.
Revenue

R2/2a se-tenant and R6a
a) Handstamped in black 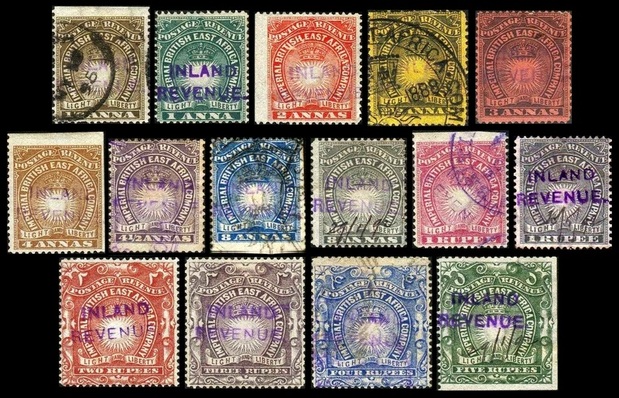 Notes:
1. The stamps with black handstamp are thought to have been issued by early 1891, since they are presumed to predate the Mombasa provisional (R31 below), which almost certainly belongs to the first half of that year.  The earliest recorded usage of the violet handstamp issue is a 4-anna stamp cancelled 29 January 1892.
2. The black handstamp is frequently found sideways or diagonal on the small format stamps, reading either up or down.  The violet handstamp is normally close to horizontal on all values.  Gibson notes that the black overprint is slightly larger than the violet and suggests that they were applied from different offices, though in my view the (very small) difference can easily be explained by the black ink diffusing more than the violet.
3. A postally used set (missing the 8a and 1r grey) is known on three philatelic covers from Mombasa to Paris dated 23 April 1895.  The set consists of the black handstamp on the 1a, 8a, 2r, 3r and 4r, and the violet handstamp on the ½a, 2a to 4½a, 1r and 5r.  Postal cancels of Lamu, Melindi and Mombasa are also known on loose stamps of this issue, probably representing philatelic use.
4. Forbin lists the 3a as having been handstamped in black as well as violet, and Morley lists the 3r with violet handstamp inverted.  I have not seen either of these.
5. Barefoot lists the 2½a, 4½a, 8a grey and 1r grey as being handstamped in black not violet, which suggests that he may have simply miscoded the overprint colours.  He also lists the overprint on a ½a grey-violet, though no ½a stamp was ever printed in that colour.

Note:
The initials are those of Archibald Brown, the Cashier of the Imperial BEA Company, who was one of the signatories of the Mombasa Provisional postage stamps (SG 21, 23/4, 26).  The handstamp and the manuscript surcharge on R31 appear to have been carefully arranged to fit on the stamp, suggesting that handstamp and surcharge were applied at the same time.  This would put this issue in the stamp shortage period of early 1891.


1891?  Provisionals?  Sunburst types either with or without previous INLAND REVENUE handstamp, now handstamped 'Re 2', possibly a provisional surcharge of 2 rupees. 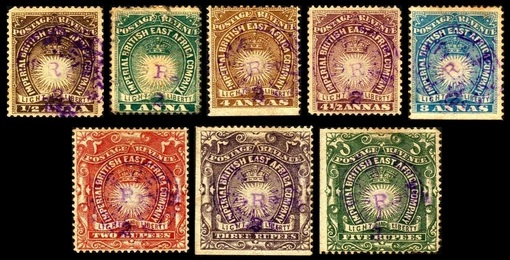 R41/48
a) Without INLAND REVENUE handstamp

Note: until now it was presumed that 'Re 2' in this handstamp refers to a new value (2 rupees), though if this is the case, it is not clear why the surcharge is found on the 2-rupee stamp.  It is also perhaps worth noting that the 'Re' part of the handstamp cannot be discerned on R51/53, and may in fact be absent.  One possibility is that 'Re' is in fact an abbreviation for 'Revenue', and was therefore not required on stamps already overprinted to this effect.  The significance of the '2' might then be 2 annas, since no 2-anna stamp is known handstamped in this way. 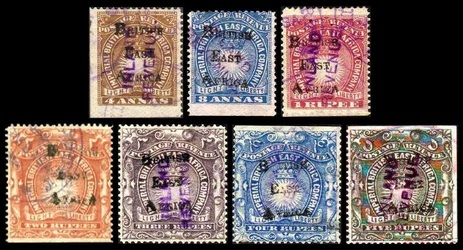 Note: the 4a is known postally used.

Note: the earliest recorded usage of this issue is an example of R73 with a Melindi postal cancel dated 24 September 1896.

Note: for ease of reference, numbering follows the Stanley Gibbons Part 1 catalogue throughout this section.  Values listed here are those recorded as having been used for revenue purposes.

The stamp illustrated at right seems to be a fiscally used example of the first postage and revenue stamp for British East Africa, the provisional HALF ANNA surcharge on the 1d adhesive of Great Britain (SG1).  However the stamp is a fake, produced by adding a forged overprint to a fiscally used GB stamp. 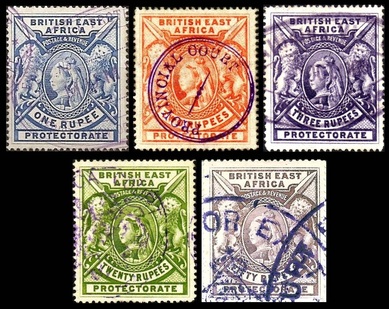