Acknowledgments for Zanzibar can be found on the main East Africa page. 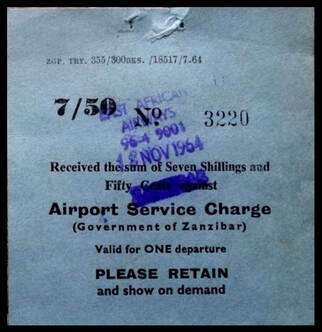 Note: A2 is not recorded without the T SH 1000 handstamp (as A3) but is presumed to exist. 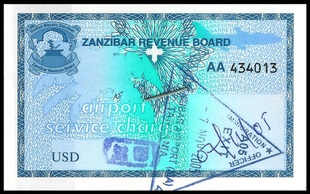 A11
2005 (recorded usage).  Label inscribed ZANZIBAR REVENUE BOARD airport service charge.  Imperf.  Security background of text in wavy lines.  Denominated USD with blank space to allow the value to be inserted by handstamp.  Security number in black at right. 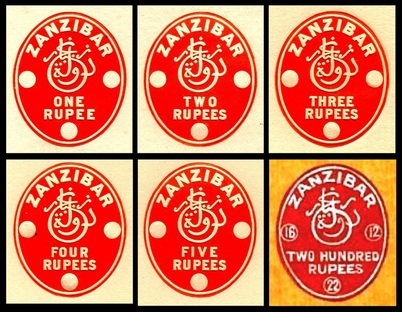 Illustrated here are proofs for impressed stamps denominated from 1r to 5r, plus an essay for the 200r,  all in vermilion.  The essay is dated 14 January 1922 in the margin (though the date plugs show 16-12-22).  No other examples have been recorded to date, and it is not known whether these stamps were ever issued. 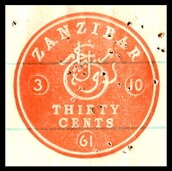 Bogus opt on Foreign Bill
The stamp illustrated above was sold on eBay in June 2012.  It is a Special Adhesive stamp of India overprinted Zanzibar in mixed case, similar to the postage stamp provisionals of 1895-96.  I can find no prior record of this overprint being found on revenue stamps, but in my view it looks genuine and could be the earliest revenue stamp of Zanzibar.  I would be grateful to anyone who can provide further information which might allow this stamp to be authenticated.

The stamp illustrated at right (which also appeared on eBay in summer 2012) shows a similar overprint on the Foreign Bill 12a stamp of India, but in this case the overprint is clearly bogus, having poorly-formed letters and an weak impression. 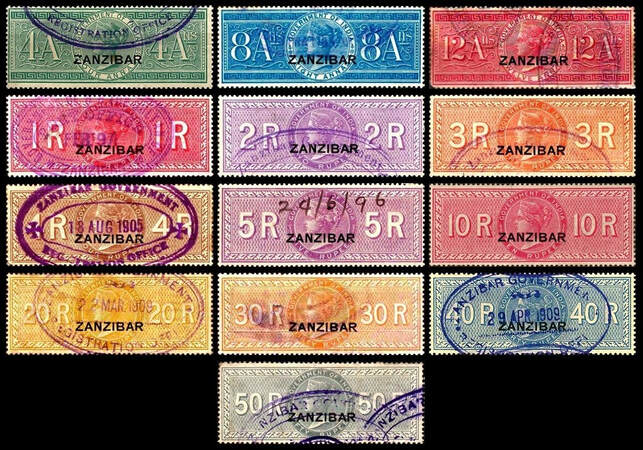 Notes:
1. All values are known with CANCELLED overprint, emanating from the De La Rue archives.
2. The dates in brackets in the above listing are taken from a De La Rue archive sheet bearing a complete set (opt CANCELLED), with a date written above each value in manuscript.  It is not known whether the dates indicate when the stamps were printed or when they were dispatched from London, but in either case they were very probably issued in Zanzibar no more than a couple of months later.
3. Examples of the one-anna receipt stamp are known with a forged ZANZIBAR overprint on the common Indian stamp, produced presumably in an attempt to defraud philatelists.  The letters of the forged overprint are too narrow and the top of the Z is raised above the line, as shown in the illustration above.


1904 (according to Barefoot).  Provisional manuscript surcharges on the above issue.

Notes:
1. Morley additionally lists the 4a on 8a surcharged in black or blue, which I have not seen.
​2. Manuscript surcharges such as these are easy targets for forgers.  Buyers should beware of paying high prices for such items.
1904 (according to Barefoot).  Printed provisional surcharges on the 1893 issue, with three different types of surcharge.

Note: Barefoot additionally lists the 1r on 8a with this type of surcharge in red, though I have not seen this and suspect it may be an error for the sans-serif surcharge (see R51 below).

Notes:
1. The violet surcharge on R51 can sometimes appear either red or blue.
2. One example of R51 was reported (and subsequently listed in Barefoot) as being surcharged at left only.  Close examination of the stamp revealed that it was a normal example of R51 but with the right-hand part of the surcharge hidden almost completely by the cancel.
3. Barefoot additionally lists the 3r on 2r with this type of surcharge, though I have not seen this.

Note: Morley lists a 1r on 2r surcharge, which I have not seen.  Barefoot also lists a 1r on 12c, but I believe this may be erroneously copied from Morley, who lists this stamp with REVENUE in black block type (see footnote below R104).​

R111
1930?  As 1926-27 postage and revenue issue but overprinted GOVT SAVINGS BANK in seriffed letters 2½ mm high.  It is unclear whether this was a savings stamp or simply a company chop.

Note: the 50r was originally proofed in black and brown-orange, but this was rejected in favour of using the same colour for both head and duty plates.

Notes:
1. Details of the above issue, derived from the Crown Agents archive in the British Library, were first published in Michael Vesey-Fitzgerald's 'Zanzibar Revenues: A Revision', B.E.A. (The Bulletin of the East Africa Study Circle), Vol 15 No 98 (May 2011).  He notes that the stamps were dispatched to Zanzibar on 12th January 1970.
2. The values in brackets are known from the printer's archive in the British Library but have not been recorded hitherto as issued stamps.
3 Only one printing of each stamp is recorded in the Crown Agents archive. Print quantities for each value were as follows:

Note: for ease of reference, numbering follows the Stanley Gibbons Part 1 catalogue throughout this section.  Values listed here are those recorded as having been used for revenue purposes.  Dates of issue are as given in Gibbons.

Printers: all the following stamps were printed (recess) by De La Rue unless otherwise stated. 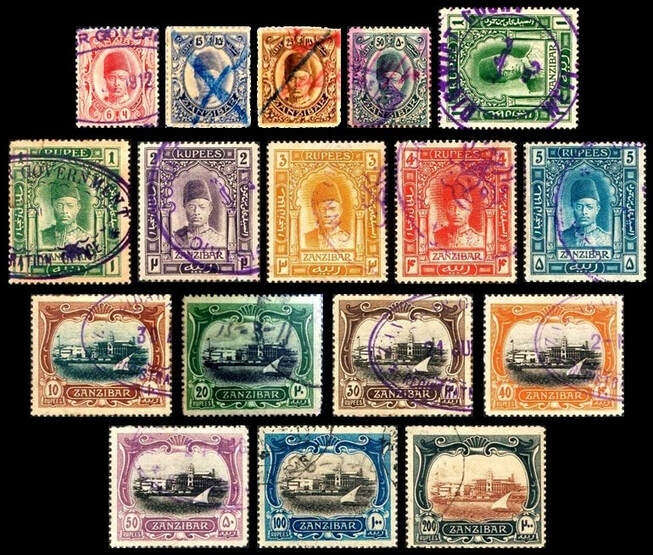 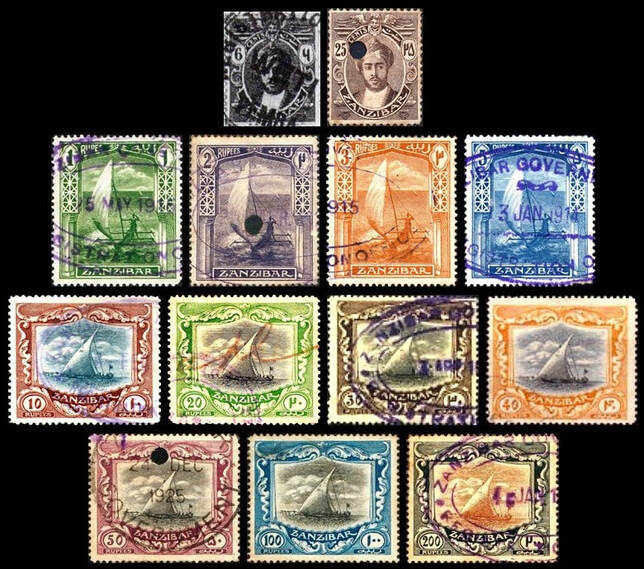 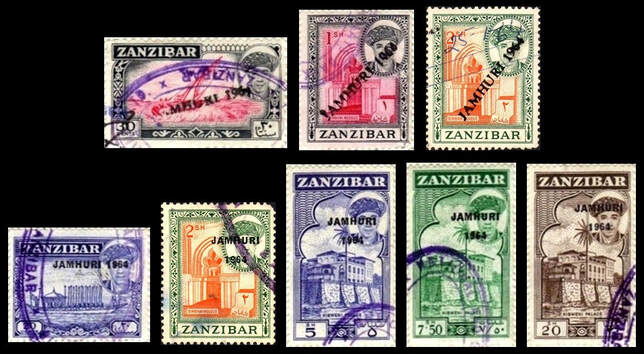 b) Denominated in US dollars
S6. $5 rose-red
Previous page: Uganda
Back to East Africa main menu