Please note: this page is currently (January 2022) being improved and some illustrations have yet to be updated

Professional Syndicate issues
Charity labels
All other types of Syrian revenue adhesives (Consular, Judicial, Notarial etc), as well as acknowledgments for this section, can be found on the Syria main page.

An illustrated key to Syrian revenues since 1939 can be found here.

Note: many of the stamps listed in this section have the year of validity printed on the stamp; in such cases the imprint year is recorded as the date of issue.  Otherwise dates relate to recorded usage or to best guess (indicated with a question mark).
_Damascus Lawyers' Retirement Fund 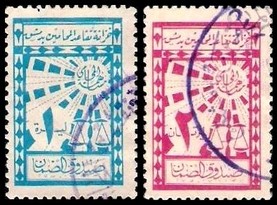 Note: for other Damascus lawyer issues, see below under the heading Lawyers' Syndicate of Damascus.
Damascus Workers' Union 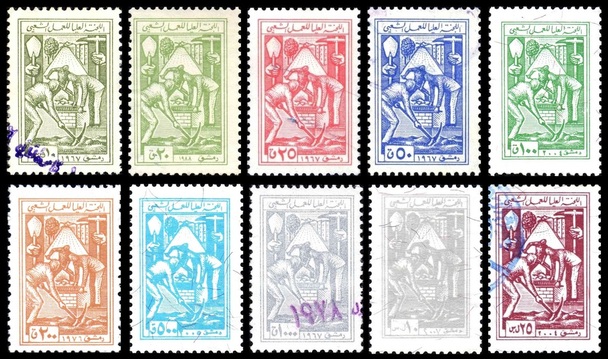 Notes:
1. Several values show significant shade variations from one year to another, for example the 200p which was purple-brown in 1967 but chestnut or yellow-brown in later printings.
2. The shape of the figures of value also varies from year to year.  The 1967 and 1976 printings of the 25p have large figures of value; printings from 1978 onwards have smaller figures of value.
3. I have seen one example of the 1000p dated 1967 (see illustration) but rough perf 15 to 16.  I suspect this is a forgery, and would be grateful to any reader who can supply more information. 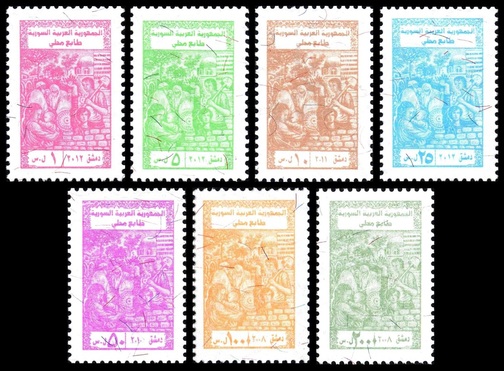 Note: the second line of inscription seems to suggest that these may be general-duty revenue stamps, though in other regards the issue is very similar to SD1/9 and is presumed to be their successors.
_General Union of Workers' Syndicates 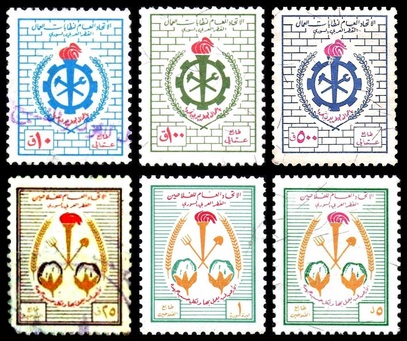 SK12/15
a) Standing figure of Justice with scales and book, inscribed al-ata'ab (=Fee)

Note: it is not known in what order the above series were issued, or whether they might have been in use simultaneously for different purposes as reflected by the inscriptions.  The earliest recorded usage is 1988 for SK12/15, 1979 for SK21/25, 1995 for SK44/47, 1986 for SK64/66 and 1994 for SK73/77, but I hesitate to establish a sequence of issues with any certainty because dated examples exist in very small quantities.  I would be very pleased to receive further information from readers. 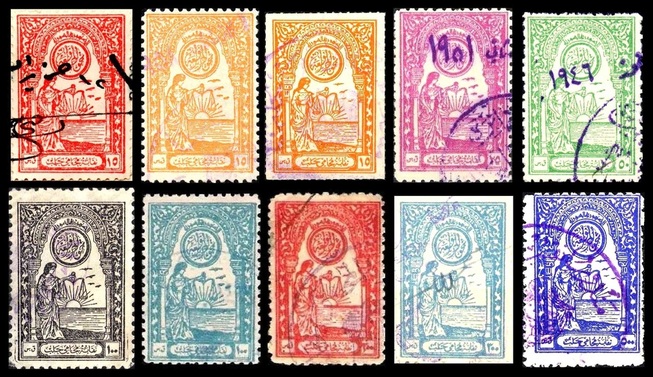 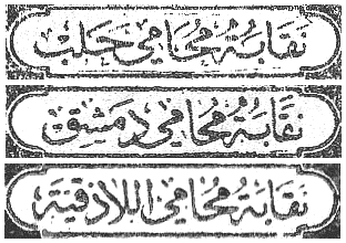 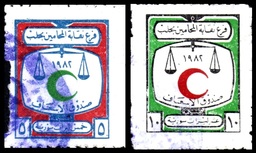 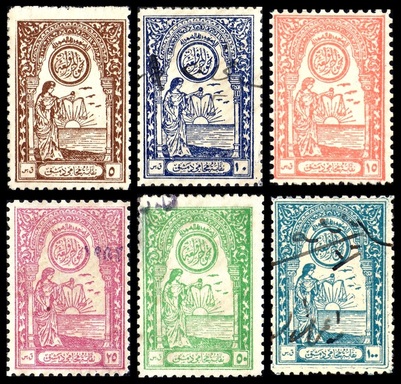 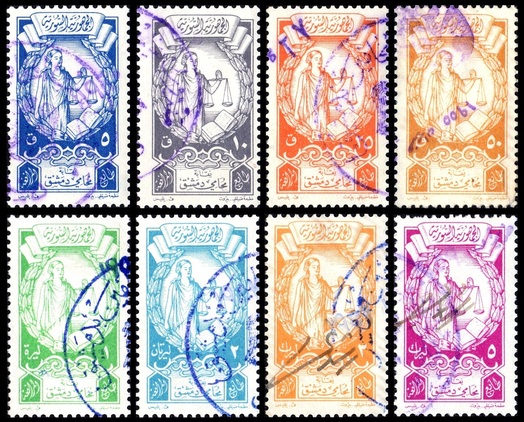 1959 (earliest recorded usage).  As previous issue but surcharged in figures and words.


Note: the stamp formerly listed as SN41 has now been identified as a Latakia issue and is listed as SQ11. 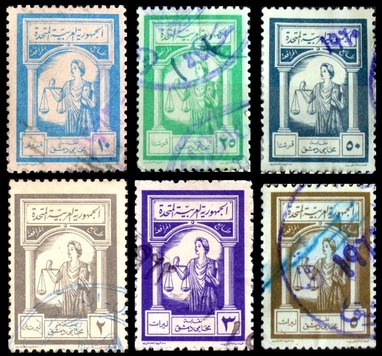 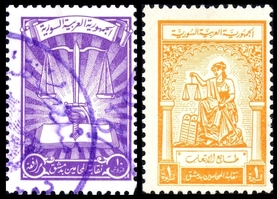 Notes:
1. Duston lists the 5p value only but attributes it to Damascus.
2. For similar types but in taller format (20 x 35½ mm) and with different inscriptions at foot, see the issue for Damascus (SN11/18) above. 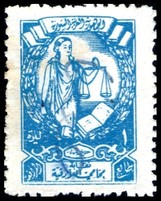 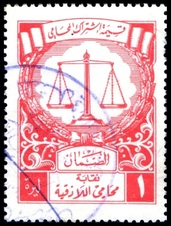 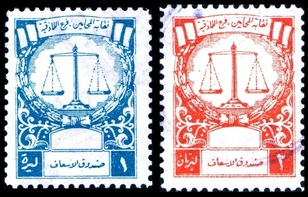 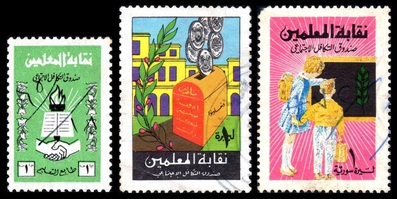 Note: the examples of ST4 and ST7 illustrated above seem to be cancelled with the Arabic numbers 65 and 72 respectively, which may indicate the years of issue.

ST13/24
_1983-86.  Horizontal types (36-37 x 25 mm) showing the badge of the Syndicate (books with symbols of learning), inscribed Teachers' Syndicate Contribution for Pension Funds, with year of validity given in Arabic numerals.  Perf 12½ x 12.  No watermark.  Badge, frame and inscriptions in black, green, red and yellow; background colours given.  Year of validity given in brackets.

Note: it is likely that similar stamps were issued for other years.  Numbers have been reserved for further additions to this listing.
Charity labels - Syrian Anti-Tuberculosis Committee

Note: all issues from TB71 onwards are inscribed with the date in both Western and Arabic numerals.

Note: similar issues are recorded for later years, of which I have seen only the following:

A sample of these are illustrated below.

I hope to be able to produce a full listing of all these sets in due course.  In the meantime, see Green's worldwide catalogue of anti-TB charity labels, which can be obtained on CD from eBay seller christmas_seals (as at October 2011). 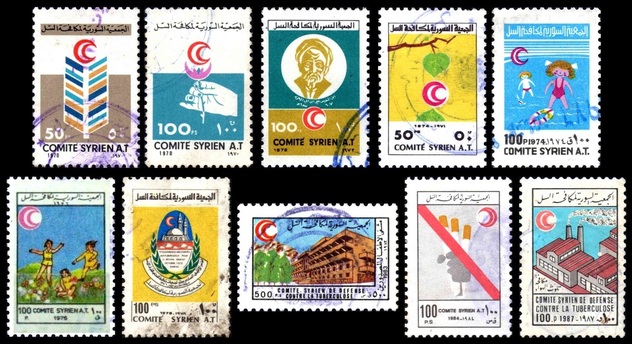 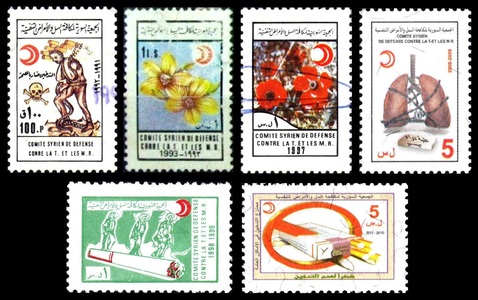 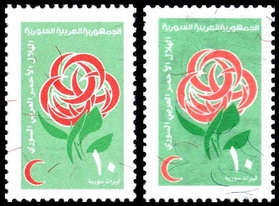