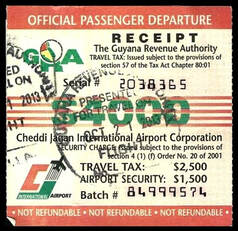 The total ticket price of $4000 comprised $2500 for Travel Tax and $1500 for Airport Security.
Entertainment Duty

The Crown Agents archive in the British Library includes a set of five proofs in the design shown here.  The face values and colours are 1c black on red, 2c black on grey, 4c black on green, 6c black on brown and 12c black on yellow.

It is not known whether or not these stamps were issued.  They are not listed in the Crown Agents Requisition books and therefore were probably not printed any time from 1921 onwards.  No issued examples are known to have survived.
Excise on Matches

[X1. No value indicated]
[X2. $3.50 for 1440 wrappers]
​
X1/2 are currently known only from printer's samples produced in the 1920s bearing the overprint Waterlow and Sons Ltd Specimen.  Since Waterlow samples of this period were usually produced in unissued colours, it is impossible to know what the original issued colours were, if the stamps were indeed issued at all.  Samples of X1 in red and blue and of X2 in green are illustrated here.
Impressed revenue stamps
Note: for impressed stamps inscribed Commission see under Postal Order poundage
1965 (recorded usage).  Imperial Crown and inscription INLAND REVENUE BRITISH GUIANA.  25 x 28 mm.  No date plugs or check letters. 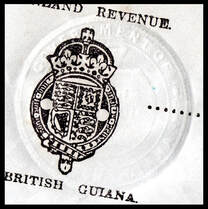 This illustration shows a circular impression which might be a revenue stamp but the relevant detail is illegible.  It is 38 mm in diameter and consists of a shield surrounded by the inscription GOVERNMENT OF BRITISH GUIANA.  It is a weak impression over a printed coat of arms, which makes it impossible to detect any central inscription, though this might show a face value, making it a revenue.  It is found on an unused donkey cart licence proforma dated 1953.  I would be grateful to any reader who can provide further information. 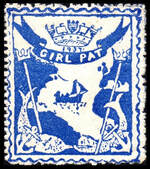 Note: the Grimsby-based trawler Girl Pat was illegally taken across the Atlantic by its captain George Black Orsborne and arrived in Georgetown on 19th June 1936.  Orsborne was taken to London for trial, and the boat was sailed back to the UK by a volunteer crew, who commissioned a Georgetown printer to produce a label as a money-making scheme.  Examples are known on postal covers with purple cachet reading Returned from "Girl Pat" as Illegal Mail. 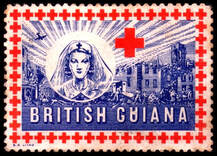 M1/5 plus printer's sample (see note 3)
1890s?  102 x 21 mm, design similar to Medicine Duty stamps of Great Britain.  Inscribed this stamp implies no government guarantee.  No watermark.  Roulette 11, imperforate at sheet edges.  Printed (litho) by Waterlow in sheets of at least 22.  The face value is given in the central panel; the figures in the side panels (shown below in brackets) refer to the value of the medicine for which duty is paid.

Notes:
1. There were two columns of stamps per sheet (horizontal pairs are imperforate at left and right) but the number of rows is not known.  The largest vertical strip recorded is eleven.
2. All recorded examples of M1/5 are unused and it is possible that they were never issued.
3. M2 was reprinted in the 1920s as a printer's sample in unissued colours (sepia and blue) overprinted Waterlow and Sons Ltd Specimen.
National Insurance

In 1969 Messrs Harrison and Sons were commissioned (Requisition 9/19894/1) to produce a set of National Insurance stamps in the design shown here.  The sheet size was 200 and each stamp showed the class of national insurance contribution as well as the face value.  All stamps have inscriptions in black and background colours as indicated below.

The Crown Agents archive in the British Library includes two more sets of proofs in the same design, dated between June and October 1980.  These apparently relate to two new issues, one similar to the 1969 set and one identical but incorporating a capital S in the design.  The values and classes are as follows:
​
No examples of these stamps are known to have survived.  I would be very interested to hear from any reader who can supply a scan of these issues.
Postal Order poundage 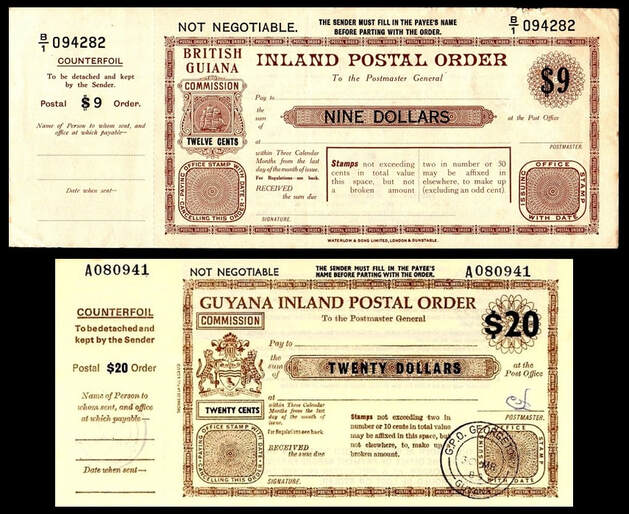 Illustrated above are two postal orders of unknown issue date.  The commission or poundage - a form of stamp duty - is indicated by means of the rectangular impressed stamp featuring the Badge of the Colony or the Coat of Arms.  The listing shown below relates to the impressed poundage stamps.  Complete postal orders are not fully listed on this website but further information can be obtained from the Postal Order Society. 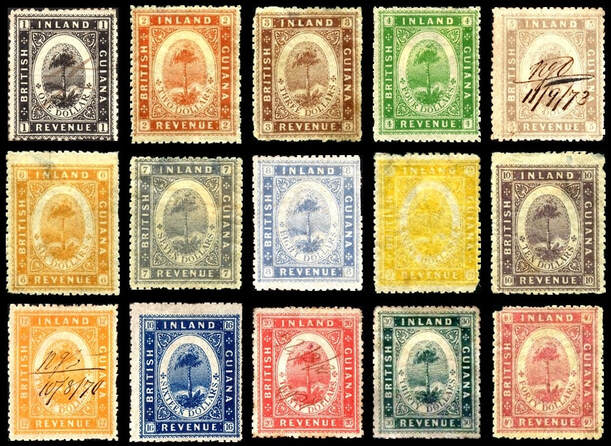 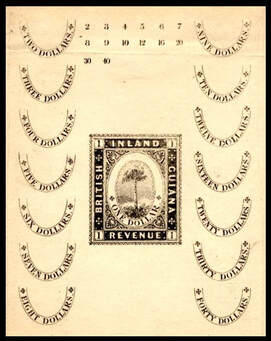 Notes:
1. Most stamps show no watermark though some can be found with large letters from portions of a sheet watermark, of which three different types are known: J WATERLOW & SONS, T H SAUNDERS and ORIGINAL TURKEY MILL KENT.
2. I have examined the one recorded example of R40 at present though I am unable to illustrate it at present.  It is cancelled 3/8/76.
3. The stamps listed here as perf 12-12½ are probably two separate printings and are described so by Morley but conflated here for simplicity.  Perf 12½ stamps are known used in 1878.  Morley suggests that the perf 12 stamps were never issued.
4. Imperforate proofs exist of the $1, $2, $4, $8, $10 and $16 in issued colours on thin paper.
5. All values except the $9 are known with a diagonal Specimen overprint, probably produced in the late 1870s.  The $7 is imperf, the $8, $10, $16 and $20 are perf 10 and the other values are perf 15.  The $5, $6 and $30 are not known in perf 15 without this overprint, though Morley lists the $5 and $6.  He also lists shades of several values but I do not regard these as significant enough to merit separate listings.
6. The $1 perf 12½ is known on piece with a postal cancel, presumably of philatelic status. 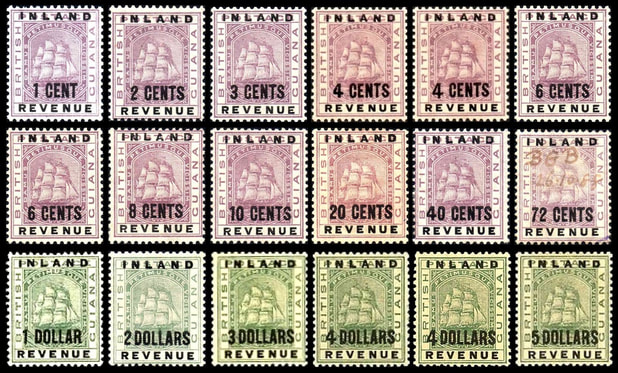 Illustrated here is a hand-drawn De La Rue essay for the above issue.  It features a palm tree similar to the 1869-77 issue and is executed on a sheet of tracing paper dated 19th July 1888.  The tree design was rejected in favour of the Badge of the Colony key type.
1889-90.  Local provisional surcharges on previous issue.
​
a) Surcharged with figure 2 only in red (1889)
R81. 2c on 2c dull purple 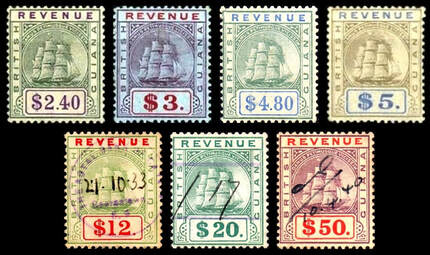 R103 overprinted as a postage stamp in 1983
1. The dates of issue are not known, but I presume that R101, R103 and R105 were issued in the early 1900s to replace the wmk Crown CA printings.  The earliest recorded usage of R101 is with POSTAGE AND REVENUE overprint, issued in 1905 (see F251 below).
2. An issue date of 1911 for R102, R104 and R106/7 is derived from De La Rue archive specimens dated Sep 1910 ($3), Oct 1910 ($5) and Aug 1911 ($20 and $50).  These were printed using a new plate with the word REVENUE in wider letters than previously.
3. All the MCA stamps appear to be on chalk-surfaced paper.
4. R105 is known postally used (presumably philatelic) dated 1894.
5. There is no reference to these issues in the Crown Agents archive, which suggests that they were not reprinted after the use of Requisition Books started in 1921.  The supply evidently did not run out for many years, with R101, R103 and R107 being known used up to the 1940s.
6. R103 was overprinted I.M.O. GUYANA 1983 and issued as a postage stamp in 1983 to commemorate the 25th anniversary of the International Maritime Organisation.
An unadopted essay bearing the portrait of King Edward VII and inscribed British Guiana Revenue £25 is illustrated here, along with others inscribed Postage and Postage & Revenue.  Despite the inscription these were almost certainly not a proposed issue for British Guiana, but a possible key type to be used across the Colonies.  The territory name British Guiana and the denomination £25 were selected to show how the widest inscriptions would fit into the design.  All three are dated 16th June 1911.

At the end of 1939 the Crown Agents were asked to tender (requisition 9251/1) for a new British Guiana revenue issue in values of $2.40, $3.00, $4.80, $12, $20 and $50.  De La Rue produced two different essays featuring the portrait of King George VI and inscribed REVENUE $2.40.  According to the Crown Agents Requisition Books, the order was cancelled in view of the "emergency" - a euphemistic reference to the outbreak of the Second World War.  ​Bromides of the essays are illustrated here. 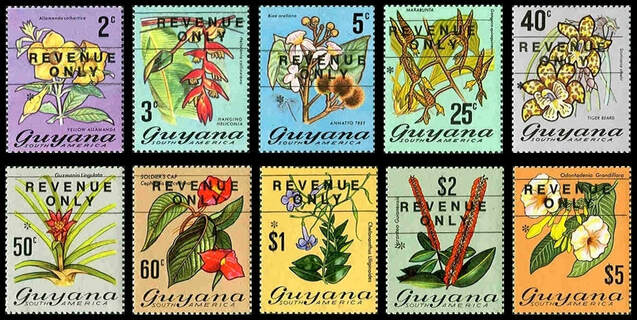 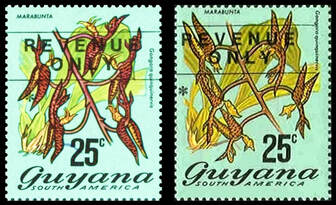 Notes:
1. This set was authorised for postage and all values can be found with postal cancels.
2. Various values of this set were reissued later with additional overprints, some of which left the inscription Revenue Only uncancelled.  Although these appear to be revenue stamps, no fiscally used examples have been recorded and I take them to be postal issues.
1975-88.  Map of Guyana, 20 x 25½ mm.  Wmk Lotus blossoms (faint on BW printing).
​
a) Wide figures of value, perf 11½ x 12 (printed by Bradbury Wilkinson) (1975)
R121. $10 yellow and black
R122. $20 green and black
R123. $50 red and black 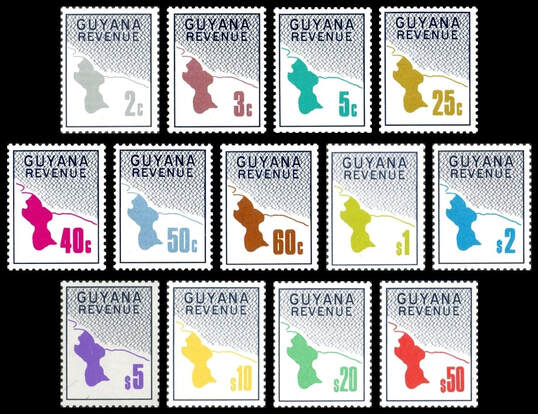 Note: the issue date for the original printing is not known, but Zirinsky's article on this issue includes a copy of a BDT check sheet for a reprint of the $5 value (R173) in 2003.  He also shows BDT counterfoils which probably relate to the self-adhesive issue, which establishes that these also were the work of BDT.

Bank of Guyana commemorative issue
The two stamps illustrated here were issued in October 2015 by the Guyana Post Office to commemorate the 50th anniversary of the Bank of Guyana.  The press releases at the time referred to these as revenue stamps, though the inscriptions on the stamps do not indicate this and no fiscally used examples have been recorded to date.
Revenue usage of Postage stamps
Note: for ease of reference, numbering follows the Stanley Gibbons Part 1 catalogue throughout this section.  Values listed here are those recorded as having been used for revenue purposes.
​
​
Printers: numbers F131/F282 were all printed by De La Rue.  All these stamps except F217/224 were typographed, measure approximately 18 x 22 mm and are perf 14. 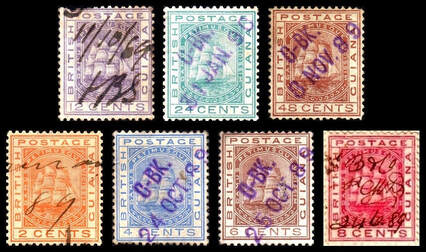 Note: stamps in similar type but overprinted Inland Revenue and surcharged are listed in this catalogue as Revenue stamps (see R61/85).  Stanley Gibbons lists these as postage stamps (SG175/192 and SG207/210) 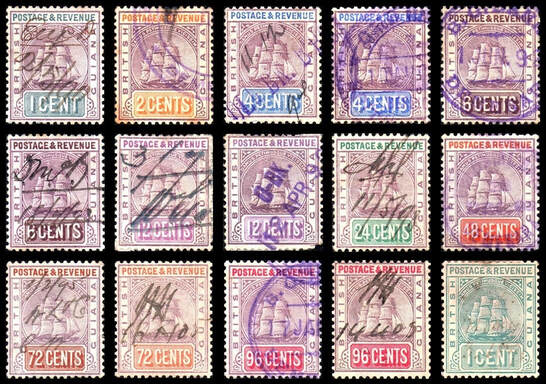 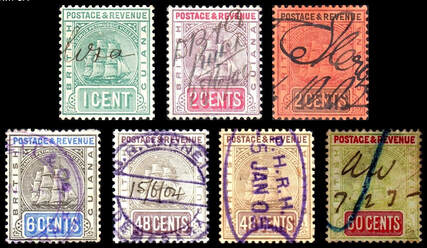 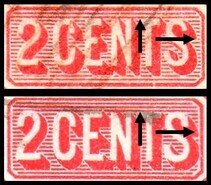 Note: the most obvious difference between F253 and F253a is in the value tablet as illustrated here.

Note: the 3c and 12c values of this set are known with a bogus overprint in black reading Marine Detatchment (sic).  For illustration see below F308/319. 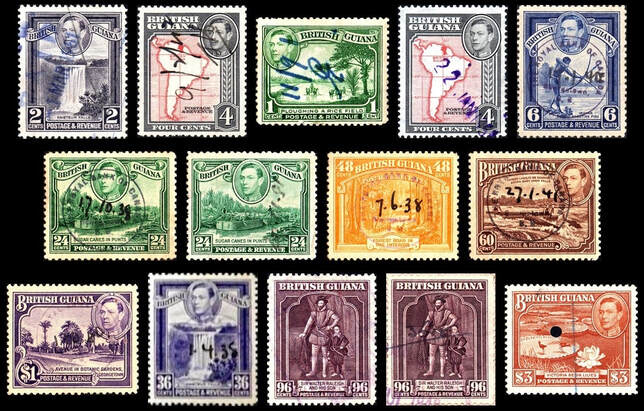 Note: I have not been able to find F999 in the postage stamp catalogue and it may be a dedicated revenue issue though there is no inscription to indicate this.  There have been many provisional surcharges on modern Guyana stamps, some of which may have been used for revenue purposes, but as yet I have seen no examples with fiscal cancels.
Summary Jurisdiction 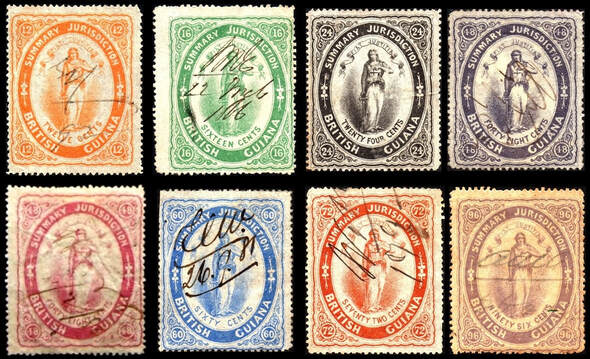 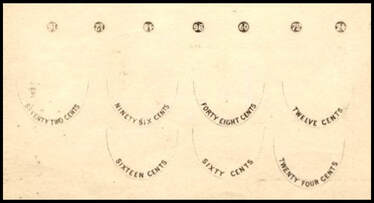 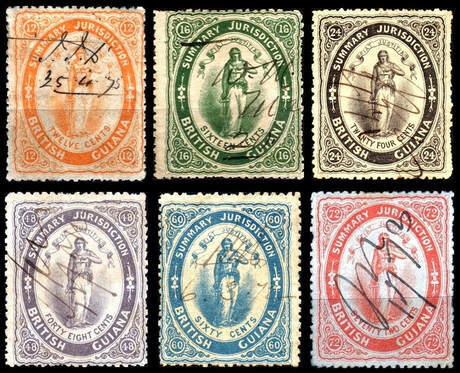 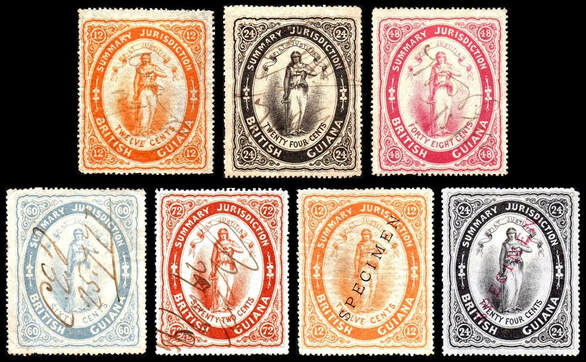 Notes:
1. Imperforate proofs exist of the 24c, 60c and 72c in issued colours on thin paper or card.
2. J21 and J23 are known with a diagonal Specimen overprint in seriffed capitals (in red on 24c), probably produced in the late 1870s. 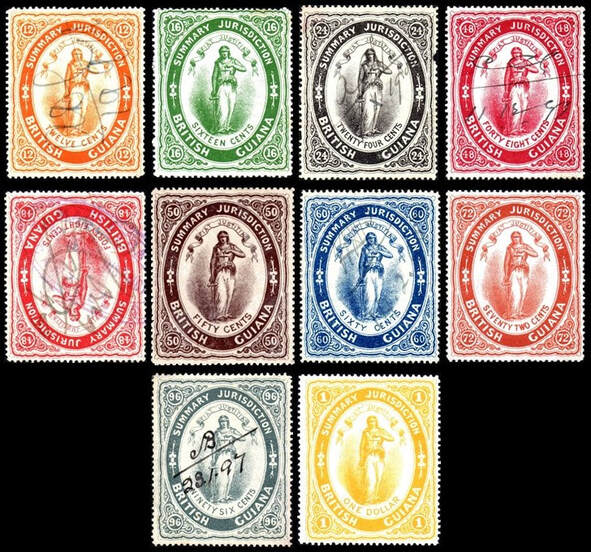 Notes:
1. Morley lists J34/37 and J41/47 as having been printed on bleuté (ie blued) paper as well as white, though the blue tinge to the paper is faint and does not merit a separate listing in my view.  I have seen a few examples of J44 and J47 on blued paper and J34 only on blued paper, otherwise all the Crown CC issue (both perfs) on white paper only.
2. No used examples of J49 are recorded and it is possible that this value was never issued.

Note: no used examples of J51/54 are recorded and it seems likely they were never issued. 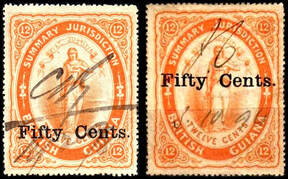