The issues listed below were used in Abu Dhabi - one of the seven constituent members of the United Arab Emirates - before and after the formation of the UAE in 1971.  Earlier issues are listed under Trucial States.  Post-independence stamps for the whole of the UAE are catalogued under United Arab Emirates.


Currency
(Note: Abu Dhabi used Bahraini currency as a temporary measure from the devaluation of the Gulf rupee in 1966 until the formation of the UAE with its own new currency)
Acknowledgments

The stamps which formed the basis of this listing were brought to my attention via the Emirates Postal Museum website, to which further information was added by Joe Ross.  I gratefully acknowledge their assistance.
Labels 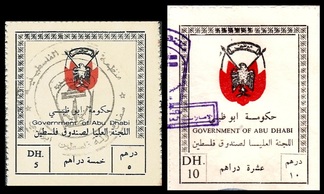 L1/2
1978 (recorded usage).  Palestine charity labels inscribed Government of Abu Dhabi in both Arabic and English, with High Committee for the Palestine Fund in Arabic only.

​Note: there are slight differences in the design between L1 and L2, such as in the size of the Coat of Arms.  Also the English inscription is in mixed case on L1 and in capitals on L2.
Revenue.

The earliest recorded usage of this stamp is on a visa dated 5th February 1972.