This chapter covers stamps issued from 1917 to the present day and inscribed in any of the following ways:
Stamps inscribed 'Kenya Uganda and Tanganyika' were valid for fiscal use in Tanganyika from 1935 until the 1960s.  These are listed under East Africa and Uganda - Kenya and Uganda - KUT.

Tanganyika was united with Zanzibar in 1968 to form independent Tanzania.  All Stamp Duty adhesives issued since then are inscribed 'Tanganyika', and it is unclear whether they have been valid in Zanzibar.  Other revenue adhesives have been inscribed either 'Tanzania' or 'Zanzibar Revolutionary Government'; the latter are listed under Zanzibar.


Acknowledgments for Tanganyika - Tanzania can be found on the main East Africa page.
Airport Tax 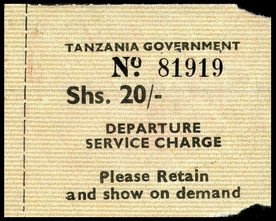 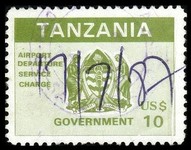 A14
1986-89 (recorded usage).  Arms of Tanzania.  Inscribed GOVERNMENT AIRPORT DEPARTURE SERVICE CHARGE.  Perf 10½.  No watermark.  A11 additionally with handstamped surcharge in purple, A13 with manuscript surcharge 3 cancelling 2 in '200/-'.

b) Denominated in US dollars; horizontal format, 35 x 25½ mm

a) Denominated in shillings

b) Denominated in US dollars 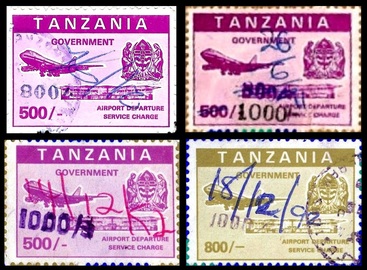 E21
b) Similar to a) but slightly smaller and enclosed in a circle 20 mm across
E21. 2s claret

An example cancelled 5 SEPT 1990 is illustrated by Gibson & Hieatt. 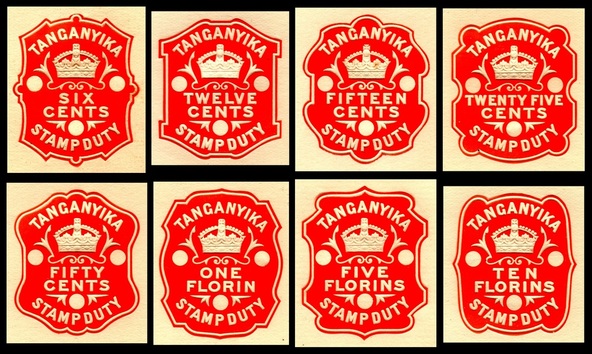 Set of proofs in vermilion with high values denominated in florins
Illustrated here are proofs for impressed stamps denominated from 6 cents to 10 florins, all in vermilion.  The florin was introduced on 31st July 1920 as a replacement for the East African rupee, and was replaced by the East African shilling (1 florin  = 2 shillings) at the end of 1921, suggesting that these proofs were prepared during this brief period.  No other examples have been recorded to date, and it is not known whether these were ever issued.

​Note: illustrated above is a master proof denominated SHILLINGS with a blank space above to allow a number to be added.  Z2 was evidently produced using this die, which explains why the word SHILLINGS is plural despite being only a 1s value.
1955-59.  Receipt stamps used on cheques.

The first printing of this stamp was despatched to Tanganyika in August 1934, with subsequent printings being sent in July/August 1935, May/June 1936 and March 1937.  The final printing (Req 1322/2) was delayed by a British constitutional crisis.  When the Crown Agents commissioned the printing (25th November 1936), they specified that the stamps should feature the head of King Edward VIII, but on 10th December he abdicated and George VI became king.  It was seen as inappropriate to go ahead with the Edward VIII stamps but a new George VI head plate would not be ready for some months, so on 17th December the Crown Agents wrote to De La Rue and directed that the printing should be carried out using the old King George V head plate. 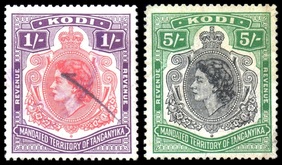 Note: both stamps were printed only once, and sent to Tanganyika in October/November 1953.

Note: proofs were approved on 26th September 1962, and the first printing of all values was sent to Tanganyika on 9th January 1963.  The 10s and 20s have not yet been recorded as issued stamps except the 10s overprinted for Stamp Duty.
Labels

Two further labels or stamps are currently known only from imperf proofs in the Crown Agents archive.  Details are as follows:

I have not seen any issued examples of either of these types.
Port Service Charge

b) Inscribed in English PORT SERVICE CHARGE (FOREIGNERS); denominated in US dollars

Note: for ease of reference, numbering follows the Stanley Gibbons Part 1 catalogue throughout this section.  Values listed here are those recorded as having been used for revenue purposes. 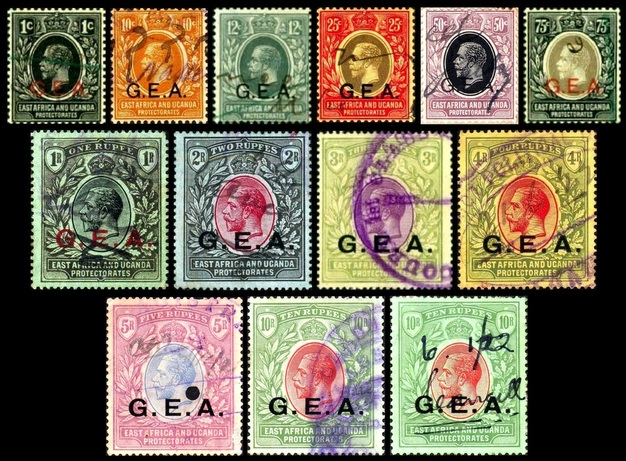 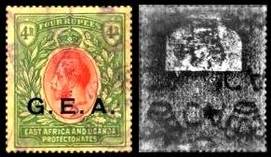 Notes:
1. Barefoot also lists the 50r, but I have not seen this value fiscally used.
2. The images of R58w are taken from the website of Ormskirk Stamps, where the variety was discovered. 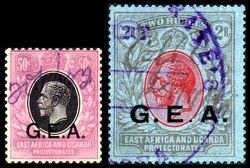 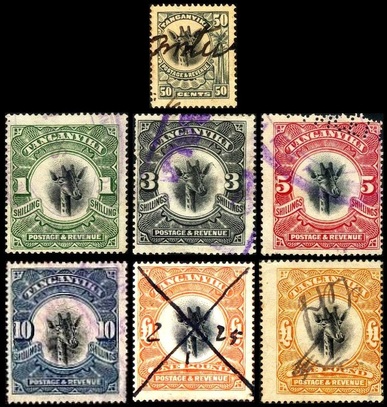 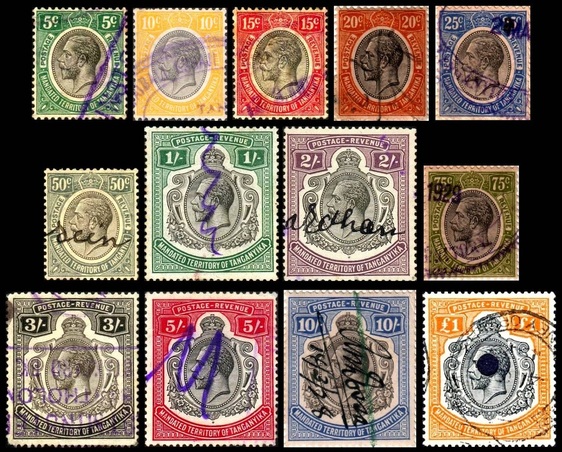 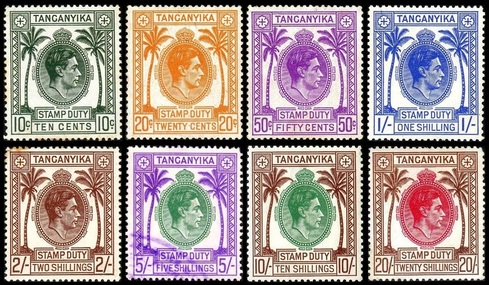 Notes:
1. The first printing of this issue was printed in December 1949, though no dispatch date is recorded in the Crown Agents Requisition books.  A second printing of the 10c, 20c, 50c, 1s and 5s was sent to Tanganyika in March 1950, and a final reprint of all eight values was dispatched in June 1950.
2. Three additional values (3s, 40s and 50s) were listed in the original requisition but cancelled prior to proof stage.
3. The 2s is known postally used. 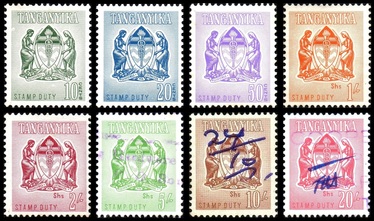 Notes:
1. The date of issue is derived from the dispatch dates for the first printing (see below). Gibson & Hieatt state that the 20s was not issued until the early 1980s (along with a new shade of the 10s) but this goes against the Req books data, which clearly show that all eight values from 10c to 20s were issued together.  I suspect that the watermarked stamps (S34a, S37a and S38a) were issued later than the 1983 surcharges since the surcharged stamps are all unwatermarked.
2. Barefoot lists a 3s, but this value was never ordered.
3. The 10c is known with postal cancel.
4. Gibson & Hieatt note that these stamps (and the subsequent issues listed below) were used only in Tanganyika and not in Zanzibar, even after the unification of the two territories in 1965 to form Tanzania.
5. For higher values (50s and 100s) in a slightly redrawn design, see S51/2 below.

Printings:
(Note: this list is probably incomplete and will be added to in future)

a) Without security lettering 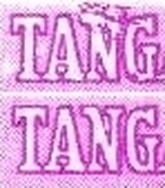