Acknowledgments for Kenya can be found on the main East Africa page.
Airport Tax

A1. 10s black on cream
a. Slightly bolder font

Note: the alignment of the text differs slightly between the two types.  On A1 the final T of TICKET is below the H of THE, while on A1a it is below the T of THE. 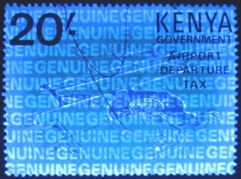 Note: the 100s on 80s surcharge is also known as a manuscript provisional.  Other handstamped versions may also exist.

a) Denominated in shillings
A11. 20s yellow-green
a. Without underprint
A12. 100s pale violet

b) Denominated in US dollars, with serial number in black at lower right, six digits prefixed by two letters
A13. $10 pale violet

Notes:
1. The date of issue shown here is based on the Harrison proof of the 100s in the Crown Agents archive, which was approved on 12th March 1984.  It is not known when the other values were issued.
2. Cylinder numbers recorded: $10 (A13) 1A1A1A.
3. Gibson lists a 50s value from this (perforated) issue, but I believe this is an erroneous listing for my A21.

A19
c1985.  View of airport.  As A13 but imperf.  Underprint as before.  Denominated in US dollars, with serial number in black at lower right, consisting of six digits with no letters.

a) Inscribed LOCAL and denominated in KSHS (Kenyan Shillings)
A21. 50s pale blue

b) Inscribed INTERNATIONAL and denominated in US$ (United States Dollars)
A22. $20 pale violet
A23. $20 ultra-pale pink

Note: the pink of A23 is so pale that the turquoise security underprint tends to dominate, making the stamp appear pale green.  Gibson lists this stamp as being green and black. 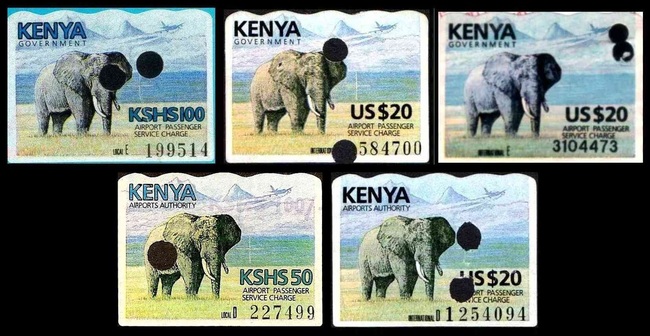 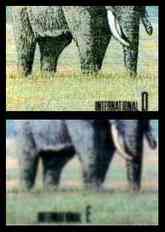 Detail of A32 (top) and A32a (bottom)
c1990 (according to Gibson).  Elephant and mountains, inscribed KENYA GOVERNMENT at top.  41 x 30 mm.  Imperf, with deckled edge at top.  No watermark.  Self-adhesive, with cross-shaped security puncture to prevent re-use (the serial letter is also punctured into the stamp at right).  Design multicoloured, with inscriptions and serial number in black.  KENYA and value in colour given.

a) Inscribed LOCAL and denominated in KSHS (Kenyan Shillings)
A31. 100s pale blue

b) Inscribed INTERNATIONAL and denominated in US$ (United States Dollars)
A32. $20 black
a. International shifted to left

Notes:
1. The word INTERNATIONAL is centred relative to the elephant's tusk on A32 and A36, and relative to the elephant's flank on A32a.  The two types can also be distinguished by the security numbers, which are in a bolder thicker font on A32a.  These seem to be two different printings and it is not known which was issued first.
2. The face value on A34/5 is shown as KSHS50.  A34 is presumed to have been issued without the 100s provisional surcharge but I have not seen an example.
Excise
Labels stuck on bottles or cigarette packs to indicate the payment of alcohol or tobacco duty.

b) No margin around design (first recorded in 2010) 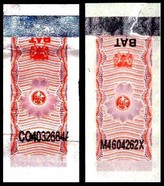 Please note: footnotes for all Graduated Personal Tax issues are given below G41 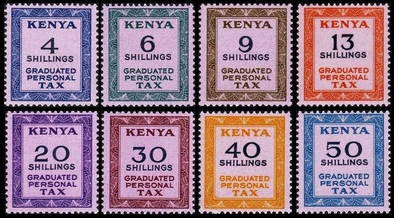 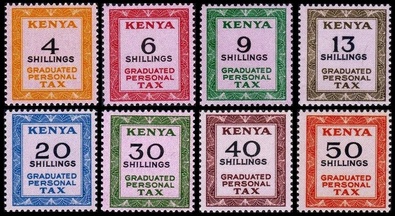 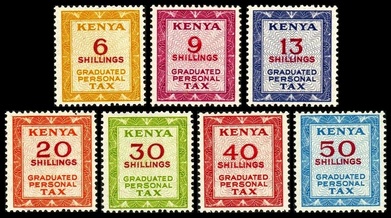 Further insight into understanding these issues would be welcome.


Hoffman illustrates an impressed stamp inscribed Graduated Personal Tax NCC (= Nairobi City Council), suggesting that this could be a proof of a new issue.  He lists values of 4s, 6s, 9s, 13s and 20s.  These are not known as issued stamps.
Hospital Tax
A tax on all Kenyans formally employed in the country to cover visits to public hospitals

Note: the proof in the Crown Agents archives was approved on 18th March 1966, and the stamp was presumably issued later that year.

Crown Agents proofs: H2/6, H8, H11/18 and H20 are currently known only from proofs in the Crown Agents archives in the British Library.  No issued examples of any of these issues have been recorded to date.  A proof of H9 and frame-only proofs for the 1975-78 issue exist in private hands and are illustrated above the relevant listings.

[no image available]
1967.  Similar to H1 but changed to horizontal format.  Inscribed KENYA HOSPITAL INSURANCE, with INSURANCE at foot of stamp below the value.

Note: the proof in the Crown Agents archives was approved on 25th April 1967, and the stamp was presumably issued later that year.

Notes:
1. The note above H2 applies to H3/6 and H8.
2. The proofs in the Crown Agents archives were approved on the following dates:

Notes:
1. The note above H2 applies to this issue.
2. Frame-only proofs in orange-red and deep blue exist in private hands and are illustrated above.
3. The proofs in the Crown Agents archives were approved on the following dates:

Hoffman illustrates another proof of a hospital revenue, this time with a coat of arms motif and inscribed KENYA NHIF.  The letter H (meaning uncertain) appears at lower left and the stamp is denominated 20 shillings.  No issued stamps in this design have been recorded.

Notes:
1. The note above H2 applies to this issue.
2. The proof in the Crown Agents archives was approved on 28th June 1979.

H16 and H19
1980-84.  As H15 in similar design but now in larger horizontal format, with a different background pattern for each year.  Inscribed KENYA NATIONAL HOSPITAL INSURANCE FUND.  Printed by House of Questa.

Note: illustrated above right is a 10s value in similar design but of uncertain status, which was first reported by Taddeo Papi in the June 2017 edition of The Revenue Journal.  It has no dates, and the letters HCF appear in the corners in place of NHIF. 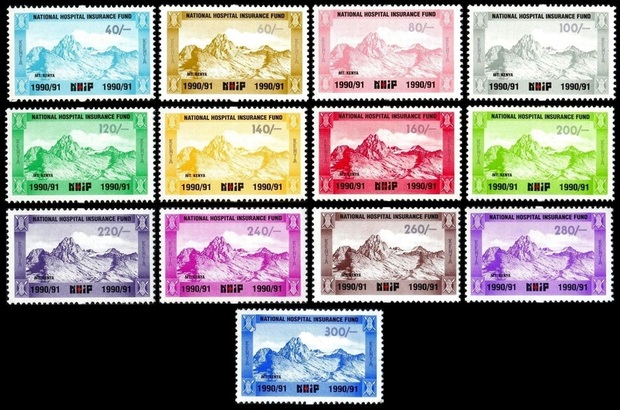 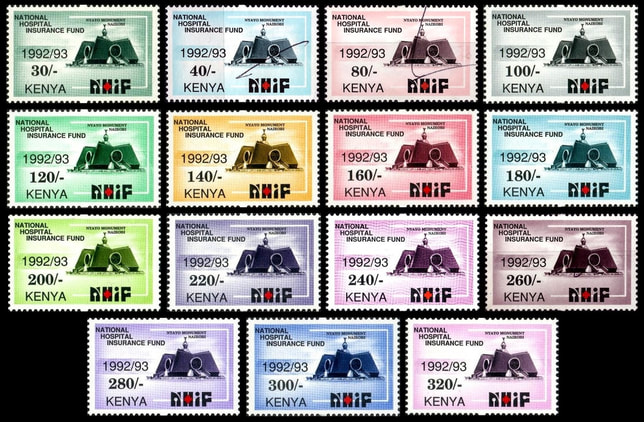 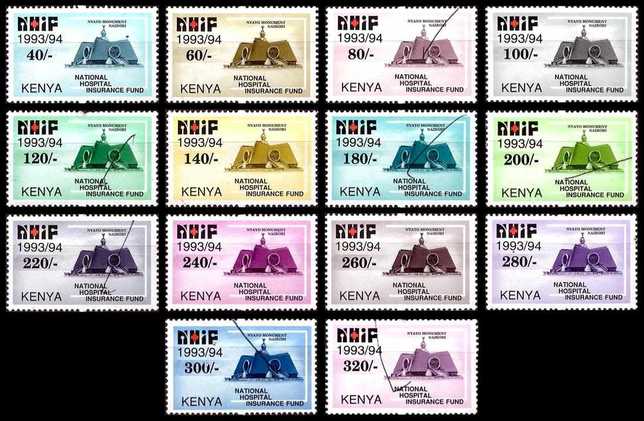 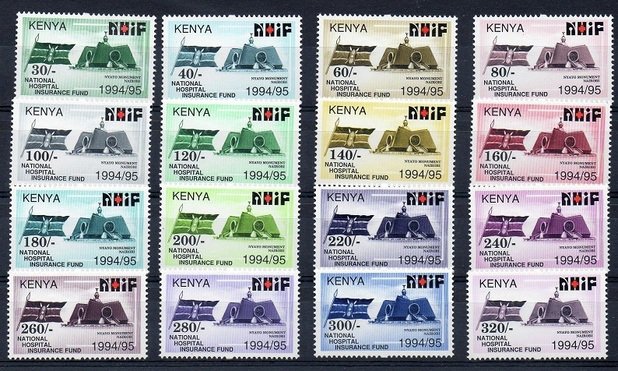 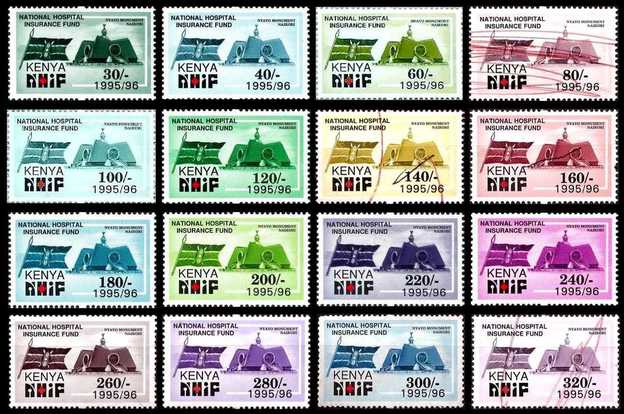 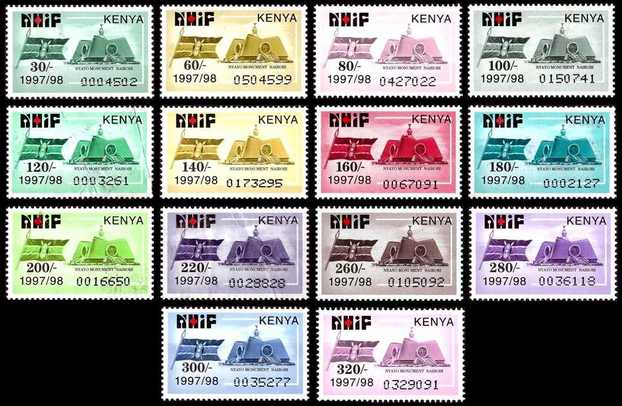 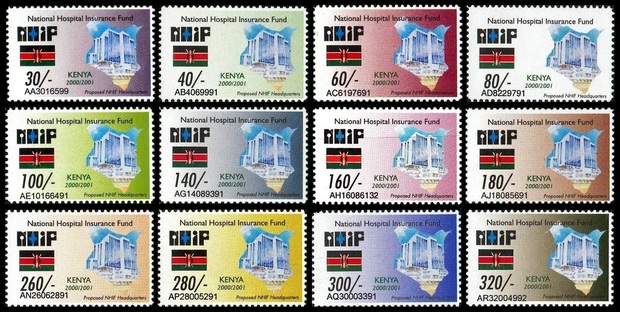 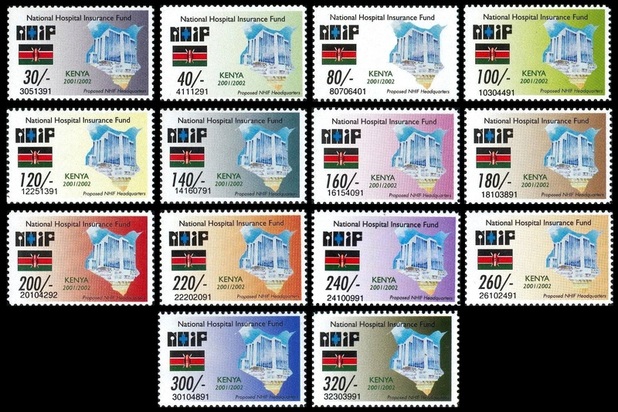 Notes:
1. The exact purpose of this issue is not clear, but may be related to an initiative to offer government services through local Huduma Centres similar to post offices.  As of October 2018 there are 52 such centres across the country, each offering a range of public services such as certification of births, driving licence applications and registration of business names.  The centres now in operation were established under a programme launched in 2013 and do not use adhesive stamps for payment, but it is possible that a similar scheme existed in the 1990s and that the stamps listed here as C1/12 were used in that context.
2. C1 and C9 are found on postal covers (where charges were incurred for unpaid postage) dated 1995-96, though the date of issue may have been some years earlier.
2. Most recorded examples are handstamped or overprinted with the digits 001, which probably indicates the post office in which the stamps were sold or used.
Impressed revenue stamps 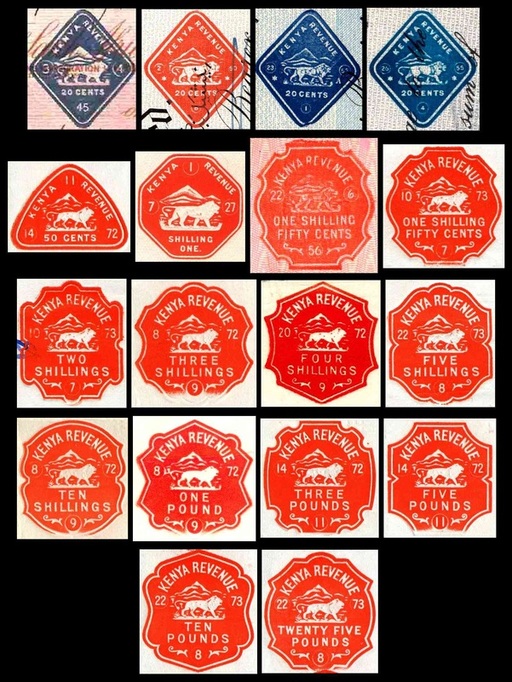 Z1/20
1927-73 (recorded usage).  Lion and Mount Kenya in frames of different shapes, all 25 to 30 mm across.  All designs incorporate date plugs, with the year plug normally on the right.  The earliest recorded usage of each type is shown in brackets.  (Two essays are known dated 1933 - see below right.)

Notes:
1. The two types of the 1s50c differ from each other in size, Z9 being slightly smaller than Z8.  The design of the later type is also coarser, with less detail visible on the lion and the mountains.  The 1s50c essay shown above right is a different type again, though this is not currently known as an issued stamp.
2. Barber illustrates proofs of a complete set of values including a 2s50c and £100, but I have not seen these two values as issued stamps.
3. Barber also lists a 30c value in both blue and red, but I have not seen these.
4. I have seen an example of the 20c vermilion with year plug at foot, used in 1954, but I am unable to illustrate this at present.

Note: for an impressed stamp similar to Z36 but reading DUTY PAID (without KENYA), see Z16 of Tanganyika-Tanzania. 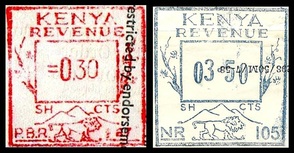 Note: separate values are not listed since the use of printed meters allowed any value (presumably up to 99s99c) to be produced.

Notes:
1. Separate values are not listed since the use of printed meters allowed any value to be produced.
2. The type inscribed POUNDS may have been an error for SHILLINGS since the pound (formerly worth 20 shillings) was not used in Kenya after Independence. 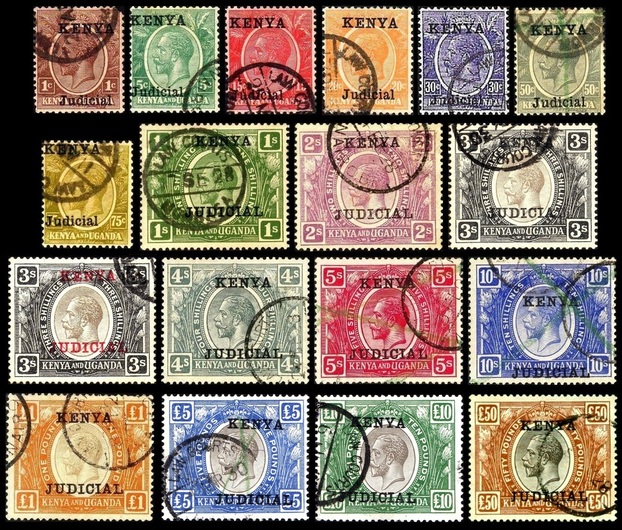 J1/20
1928-30 (earliest and latest recorded usage).  King George V postage stamps inscribed Kenya and Uganda, overprinted Kenya Judicial.  Perf 14.  Watermark Multiple Script CA (sideways on shilling and pound values, with crown to the left of 'CA' when seen from the back of the stamp).  Overprinted locally by unknown printer.  Kenya in capitals on all values, Judicial in mixed case (cents values) or capitals (others).  (For similar stamps with slightly different overprints, see J21ff).

Notes:
1. J12a is very similar to J12, the overprint having the same overall dimensions but using thinner letters with less pronounced serifs (see enlarged illustration above right).
2. Koeppel additionally lists the 2s50c, 7s50c and £2 overprinted KENYA JUDICIAL, though he does not distinguish between the local overprint and the De La Rue type.  I have not seen any of these values with either type of overprint. 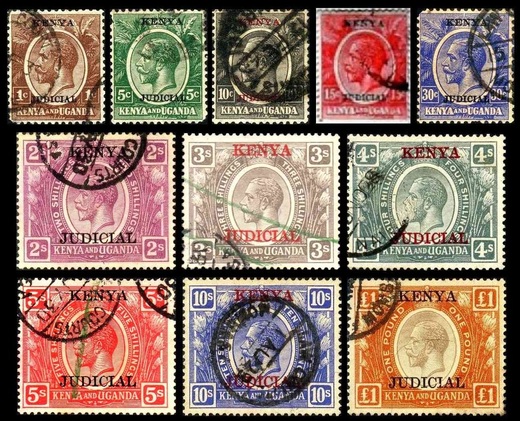 J21/37
1928-30 (earliest and latest recorded usage).  As previous issue but overprinted in capitals by De La Rue in London. 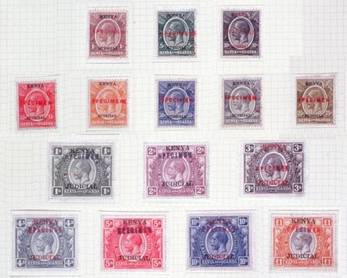 Note: illustrated at right (low-definition image – no other available) is a set consisting of all the values listed above (J21/37) plus the 20c, 50c, 75c and 1s, opt Specimen.  These last four values are not known as issued stamps and it is possible that they were not sent to the Colony, though the 50c and 1s are listed by Barefoot.  He also lists the £5, £10 and £50 with similar overprint, but I have only seen these values with the local overprint (see J1ff).
Kodi

The first printing of this stamp was despatched to Kenya in December 1935, so it presumed that it was issued in early 1936.  A reprint was sent to Kenya in May 1937.

Note: Barefoot also lists the 10s with overprint reading downwards but I have not seen this. 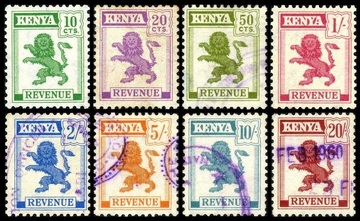 Note: The proofs for the 10c to 20s were approved on 19th January 1956, and it is assumed that the stamps were issued later that year.  The proof of the 25s was approved as a new value on 18th September 1959, so the stamp probably came into use later that year or early in 1960. 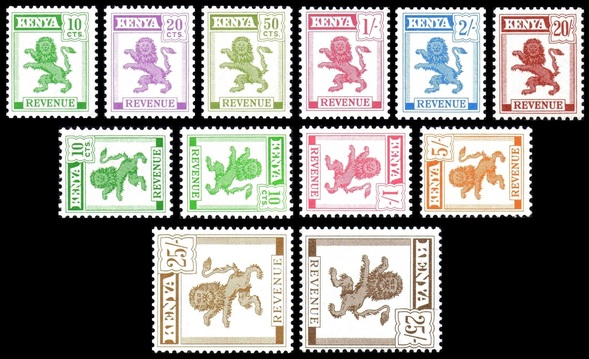 10s with faint or no wmk (see note)
c1963.  As previous issue but watermark changed to Multiple Crown and Block CA.

Note: Barefoot also lists the 10s on Block CA paper.  Illustrated above right is an example of the 10s in a brighter shade than R27 and with what seems to be a very faint watermark.  This may be Block CA but it is too faint to identify.

Notes:
1. The proof in the Crown Agents archive in the British Library was approved on 14th November 1977, and it is assumed that the stamps were issued before the end of that year.
2. Barefoot also lists the 20c, 50c, 1s, 2s, 5s and 10s from this printing, but I doubt these could exist since the 10c is the only value known to have been proofed by Walsall.

Notes:
1. Proofs of all the above values except the 20s were approved on 5th December 1979.  The 20s in pale olive was approved on 19th December 1979, the original proposed colour of yellow having been rejected.  Barefoot lists all these extra values except the 25s, though I have not seen any of them as issued stamps.  He also lists a 10c red but I believe this is an error.
2. The 10c is known postally used. 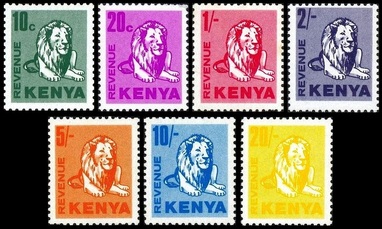 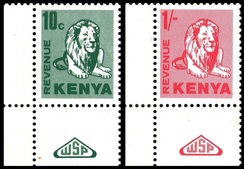 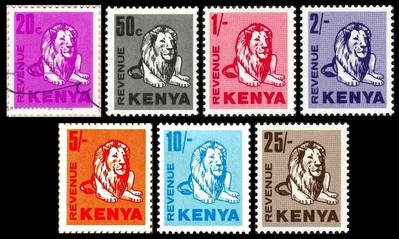 Note: the earliest recorded usage of this issue is the 10s on a postal cover which arrived in the UK on 28th July 1995.  The revenue adhesive was rejected and a surcharge applied. 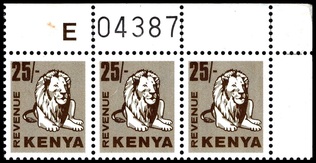 Notes:
1. The 2s value was first recorded around the year 2007.  All three values were available at the Kenya Revenue Authority in Nairobi in 2010, but in October 2018 the KRA had only the 2s value in stock along with the 20s of the 2001 issue (R88).  This may suggest a phasing-out of adhesive revenue stamps, especially for high-value transactions.
​2. All the sheet numbers I have seen (for all three values) are prefixed by the letters AA.
3. R105 can be found in a range of shades and with different types of gum from matt to glossy.
Previous page: East Africa and Uganda - Kenya and Uganda - KUT
Next page: Somaliland Protectorate
Back to East Africa main menu