The revenue stamps of Libya since independence are difficult to get to grips with, for a number of reasons.  Most significant among these is the fact that the inscriptions on the stamps often give little clue as to the purpose for which they were issued.  Also different sets sometimes seem to have been used concurrently, making it hard to determine with certainty in what sequence they were issued.

The sequence of issues in the Libya section of this website is therefore subject to revision as more information becomes available.
Tripolitania Mosque and palm tree 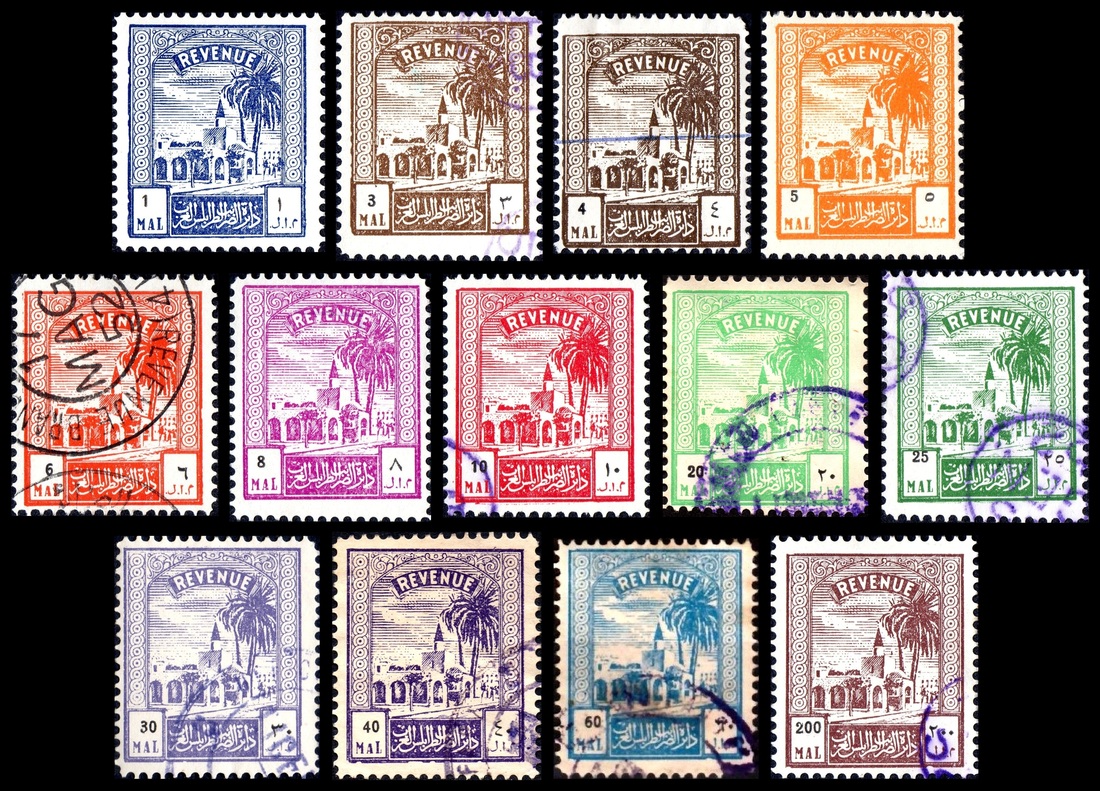 Notes:
1. In addition to the values listed above, Erler lists the 12l but I have not seen this.
2. The Military Administration Lira was in use for only a few months after Libyan independence, from 24 December 1951 until early in 1952.  This issue therefore probably saw quite brief usage.
3. Recorded usage: 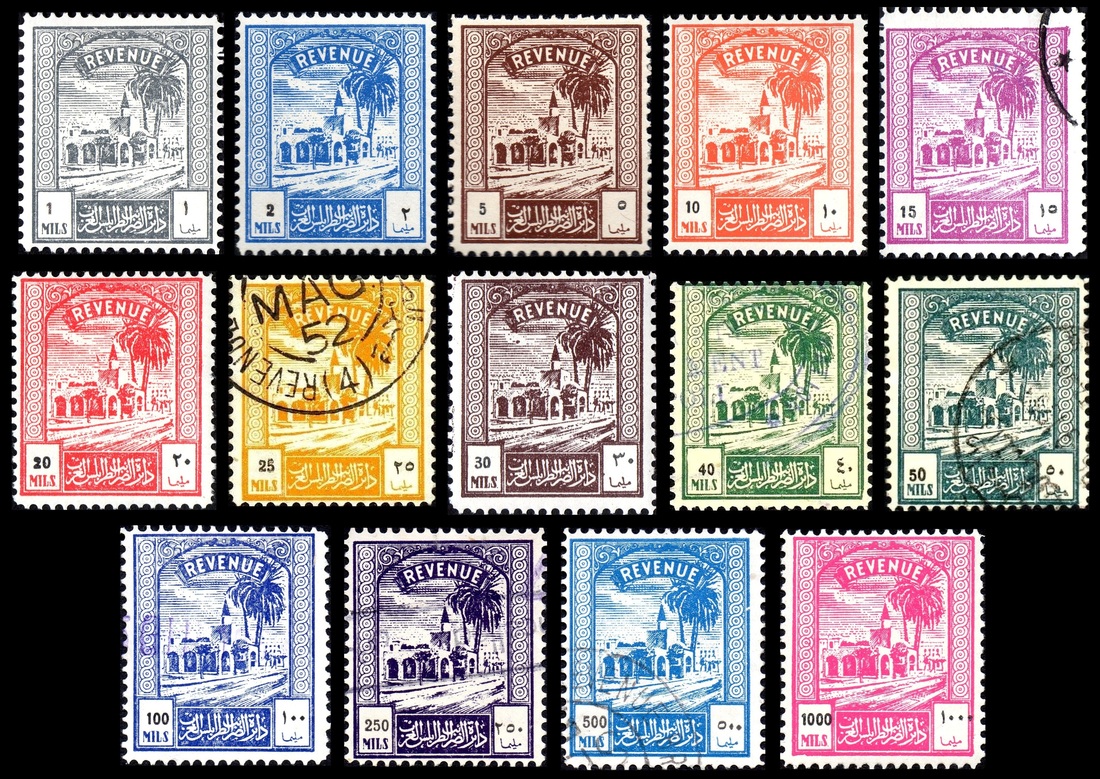 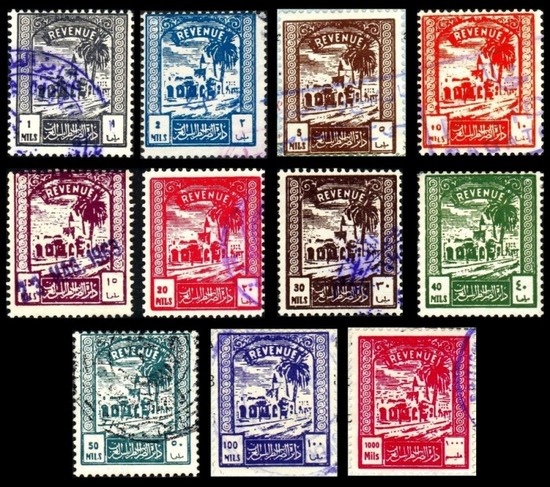 Shades can be found of most values.

For similar stamps but without REVENUE in English, and with a different Arabic inscription at foot, see Kingdom federal issues #61ff. 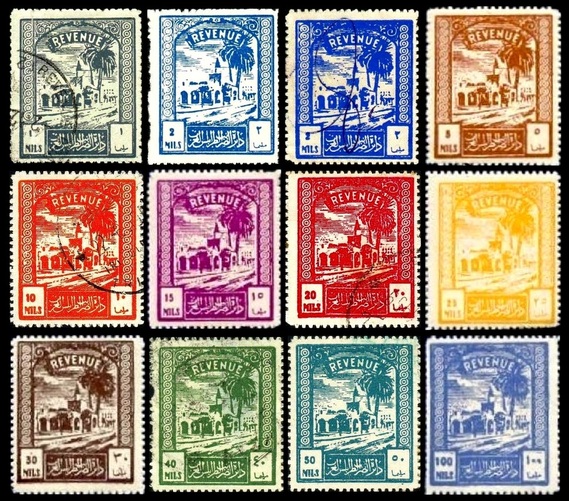 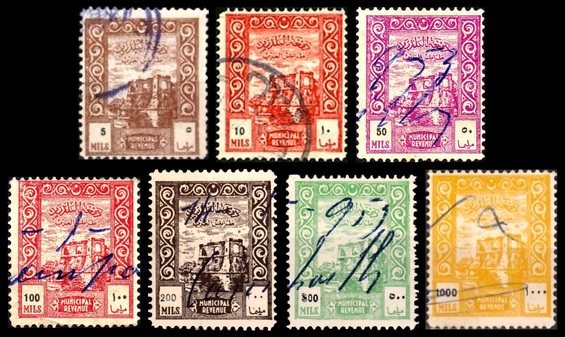 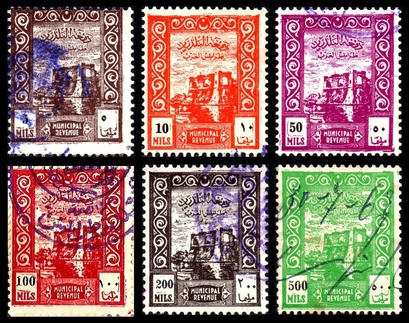 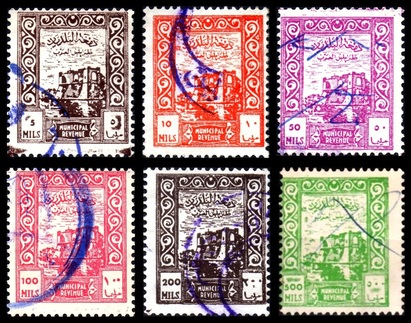 
Note: the dates of issue for the next two sets are derived from the material in the Davies collection of Libya Revenues ex the Bradbury Wilkinson archive, which is housed in the British Library.  Dates and requisition numbers of individual printings are footnoted below each set listing, though print quantities are not known at present since the Davies material does not record them.

Stamps which are known from the Davies collection but have not been seen as issued stamps are listed in square brackets. 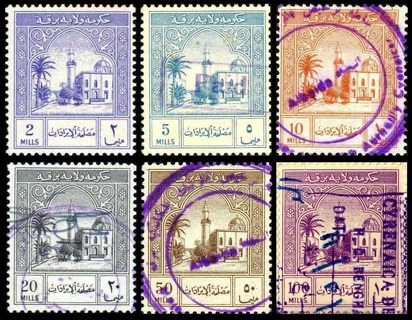 C53/57
1955-63.  Similar to previous issue but featuring the old Town Hall of Benghazi in central vignette.  Inscribed Government of Cyrenaica at top and Department of Revenues at foot in Arabic.  Perf 11½.  No watermark.  Printed (recess) by Bradbury Wilkinson.

The inscriptions on this and the previous issue are identical, with no indication as to how they were used.  However the fact that they were issued simultaneously may suggest that they did in fact serve different revenue purposes.  The design of a town hall building on C51/59 might indicate that these stamps were used for a municipal tax.


I am very grateful to Peter Bradford for identifying the buildings illustrated on these stamps and other issues of Libya.
Cyrenaica stamp paper
c1955.  Atiq Mosque type similar to C41 etc but printed directly onto lined paper for documentary use.  Inscribed Government of Cyrenaica at top and Department of Revenues at foot in Arabic.  27 x 32 mm.  Presumed printed by Bradbury Wilkinson.

The illustration below shows the top portion of a complete paper bearing an impression of P2. 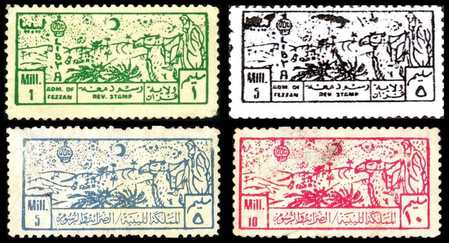 ​a) Inscribed LIBYA (reading downwards left of centre) ADM. OF FEZZAN / REV. STAMP in both English and Arabic

b) Inscribed Kingdom of Libya Taxes and Fees in Arabic only

Notes:
​1. Duston lists a 10m red as F1/2 (though this may be an error for my F8) and a 50m lilac-brown, which I have not seen.
​2. The inscription on F7/8 implies that these stamps were valid for use throughout Libya but I list them with Fezzan due to their similarity to the regional issues.