Further acknowledgments can be found on the main West Indies page. 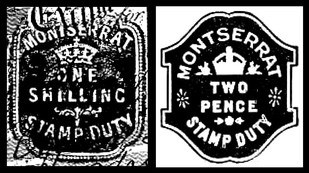 Notes:
1. Z5 is reported in the second of Charles Freeland's two articles on Impressed Die Revenues (for full details see the main West Indies page).   He is unable to illustrate the stamp, which had belonged to Victor Toeg, but states that it is cancelled 11th January 1896.
2. Freeland also reports that the Kay collection in the British Library includes a proof set of Montserrat blind embossed revenues denominated 1d, 3d, 6d, 1s, 5s, 10s, £1 and £5.
3. Barber illustrates drawings for nine different Montserrat embossed revenues from ½d to 5s (with two different types of the top value), for which he gives the date 1924-33.  None of these is known as an issued stamp, though Freeland illustrates a hand-painted essay ex the De La Rue archives for the 2d in vermilion, dated 1925 (see illustration above).
4. In 1973 the Montserrat Postmaster wrote (in private correspondence with revenue philatelist W J Pieterse) "we are not impressing revenues in documents and we never did".  Although the existence of Z5/6 above indicates that this is not absolutely correct, the Postmaster's letter suggests that the use of embossed revenues was discontinued well before the 1970s.
Labels 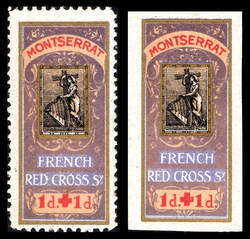 Note: for further information on these labels see Schmidt and Kiddle.
Revenue 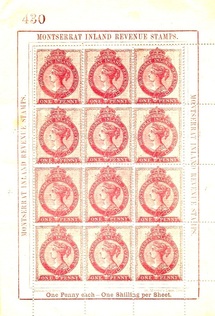 Notes:
​1. The date of issue is not known but Morgan notes: "it appears that preliminary work was underway at Harrison by February 1866, as one preparatory sheet (numbered 257) bears this date on its reverse in pencil".
​2. A small number of surviving complete sheets of this issue are known - both imperforate (proofs) and perforated, as illustrated at right.  The marginal markings include the printer's imprint, and the instructional mark One Penny each - One Shilling per Sheet.  Michael Hamilton has noted that One Penny Each is written with a capital E on the proof sheets but in lower case on the known perforated sheets, from which he concludes that at least two different plate settings were used.
1887.  Small key type design featuring portrait of Queen Victoria, inscribed MONTSERRAT REVENUE.  Perf 14.  Wmk Crown CA (upright or inverted).  Printed (typo) by De La Rue.

Notes:
1. The date of issue is derived from a perforated proof from the De La Rue archives dated October 1887.
2. The plate set-up caused stamps to be printed with half the sheet inverted relative to the other.  Inverted watermark is therefore as common as upright, and tête-bêche pairs are occasionally found, as illustrated here.
Revenue usage of Postage stamps
Note: for ease of reference, numbering follows the Stanley Gibbons Part 1 catalogue throughout this section.  Values listed here are those recorded as having been used for revenue purposes. 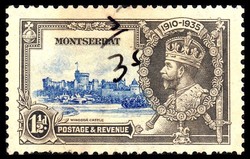 Note: these stamps are almost always found mint or with Specimen overprints, though they were evidently valid for revenue purposes as shown in the example illustrated here. 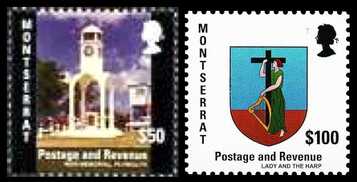 F901. $50 multicoloured
F902. $100 multicoloured
​
Note: the high face values of these stamps make it likely that they were issued primarily for revenue purposes.  I have yet to see one with any kind of cancel.
Previous page: Leeward Islands
Next page: St Kitts-Nevis
Back to West Indies main menu