This page contains the following information relating to the revenue stamps of Mauritius:
Bill of Exchange adhesives
Images of all varieties including First, Second and Third of Exchange 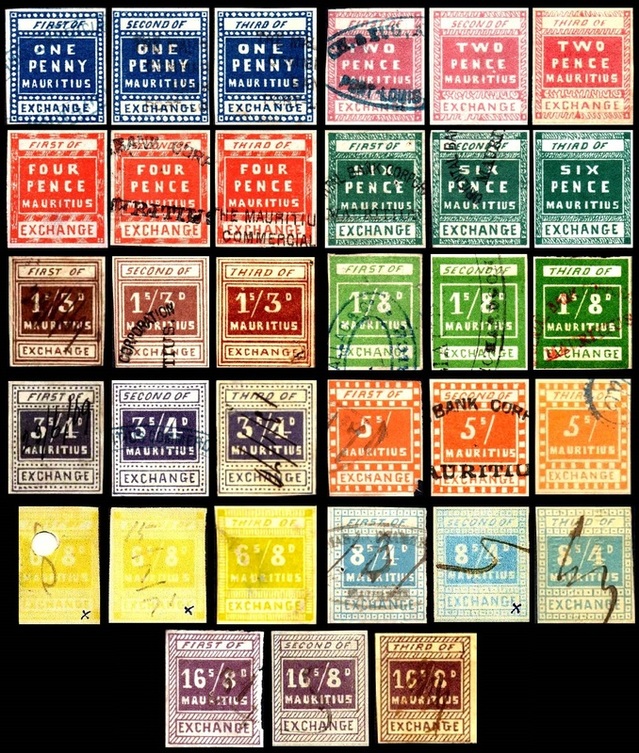 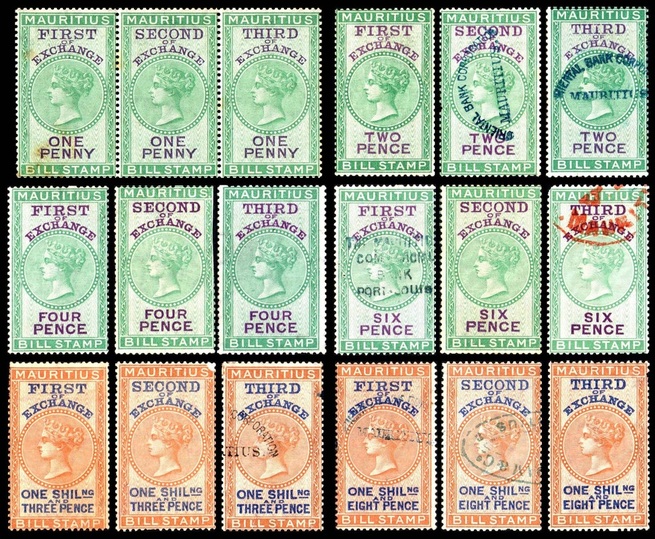 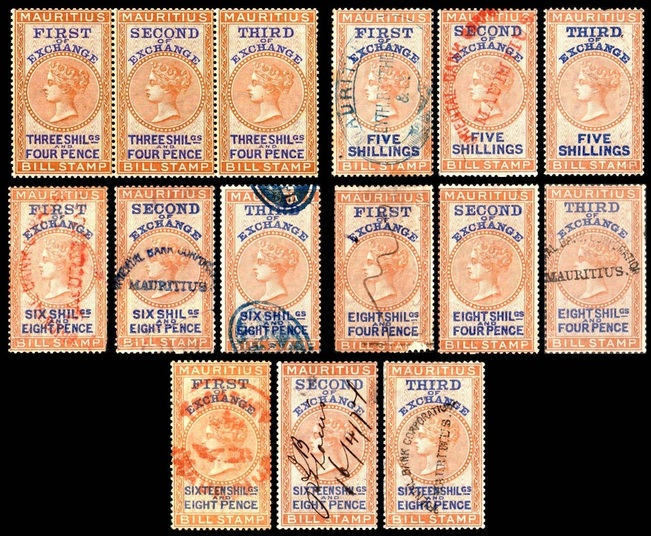 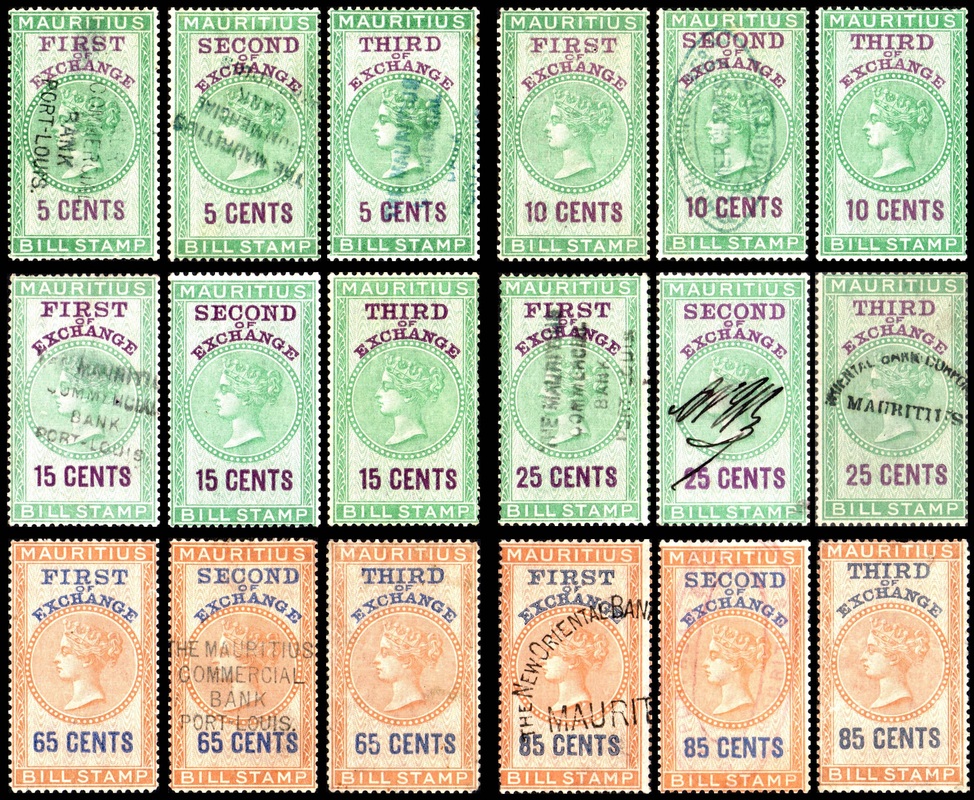 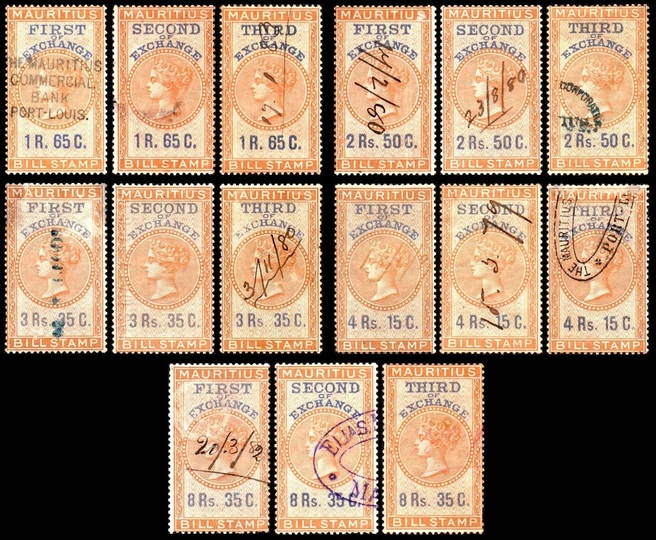 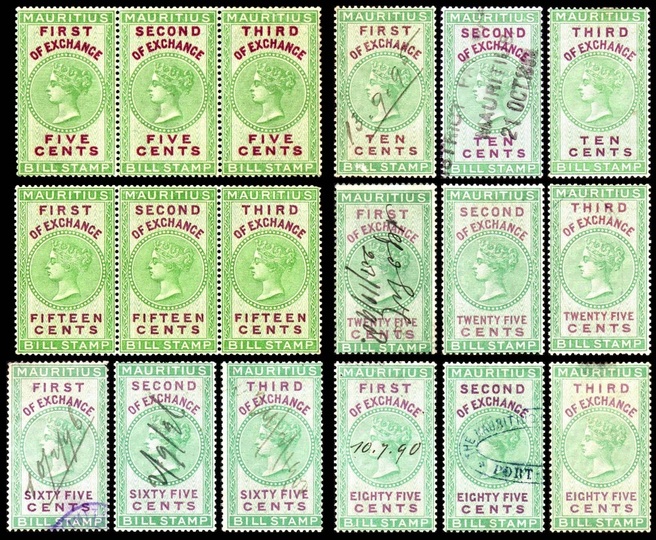 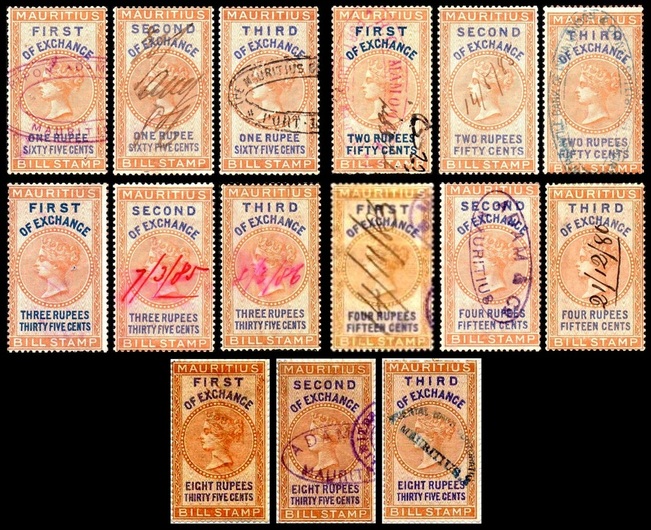 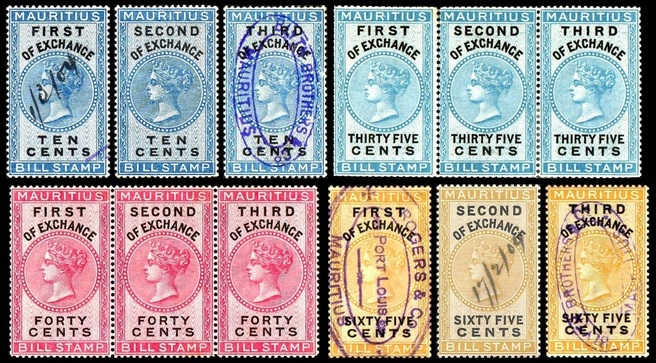 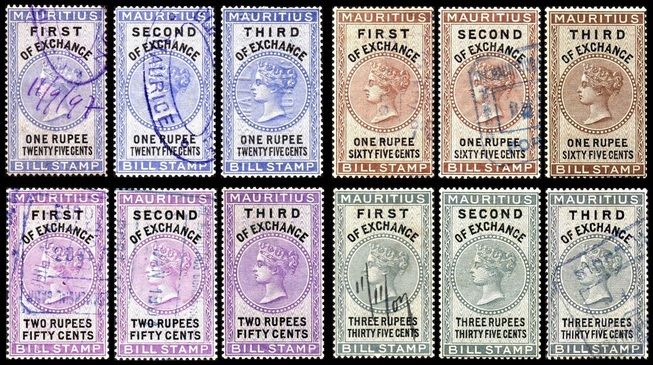 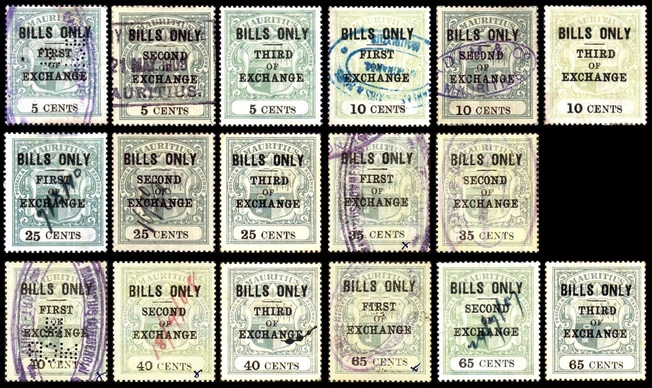 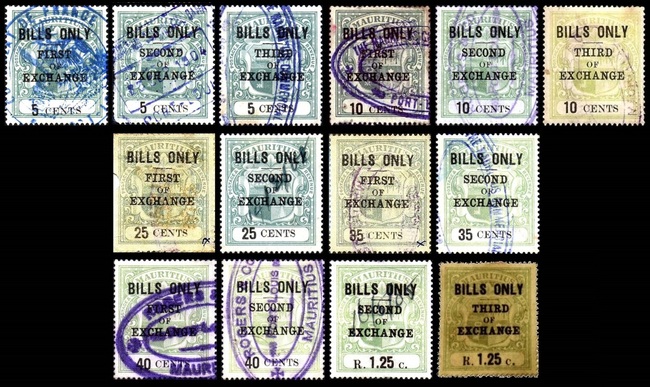 CLICK TO ENLARGE - No images currently available for 1r25c First or 25c, 35c or 40c Third of Exchange
Printer's archive material
Relating to the production of Mauritius revenue issues

Please note: many of the images in this section are taken from the websites of Grosvenor Philatelic Auctions and Christoph Gaertner auctions. 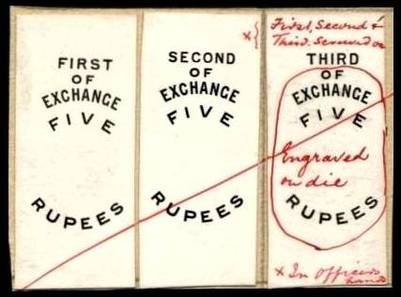 AA11
AA11. 5 rupees triplet essay with value in words, curved inscription to fit above and below
Queen's portrait, with annotation to indicate that the words OF EXCHANGE and value
were to be engraved on the die, with FIRST / SECOND / THIRD added as necessary

Note: although this essay has been listed as belonging to Mauritius, it seems to me more likely that it was for Ceylon since it resembles the issued stamps of that Colony and the denomination of 5 rupees was not used in Mauritius.  The Bill of Exchange stamps of Mauritius have the value shown below the Queen's portrait, in a type of which no essay has so far been recorded. 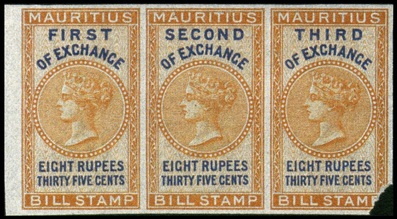 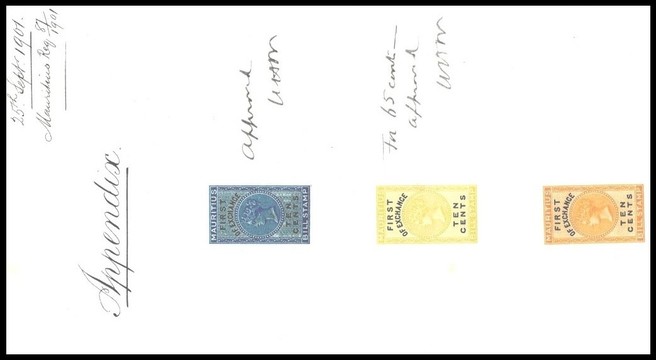 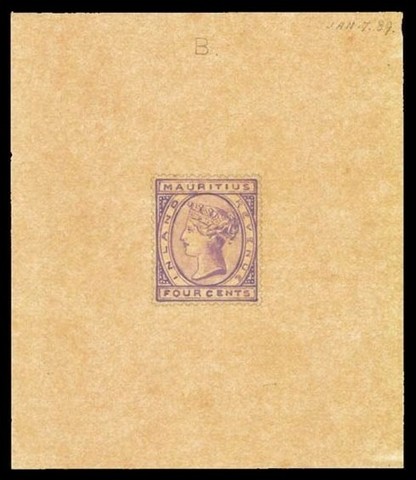 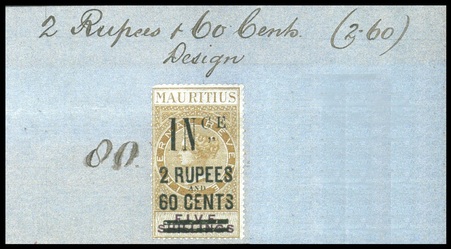 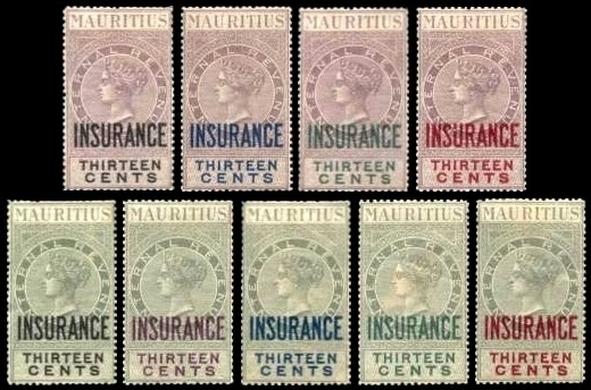 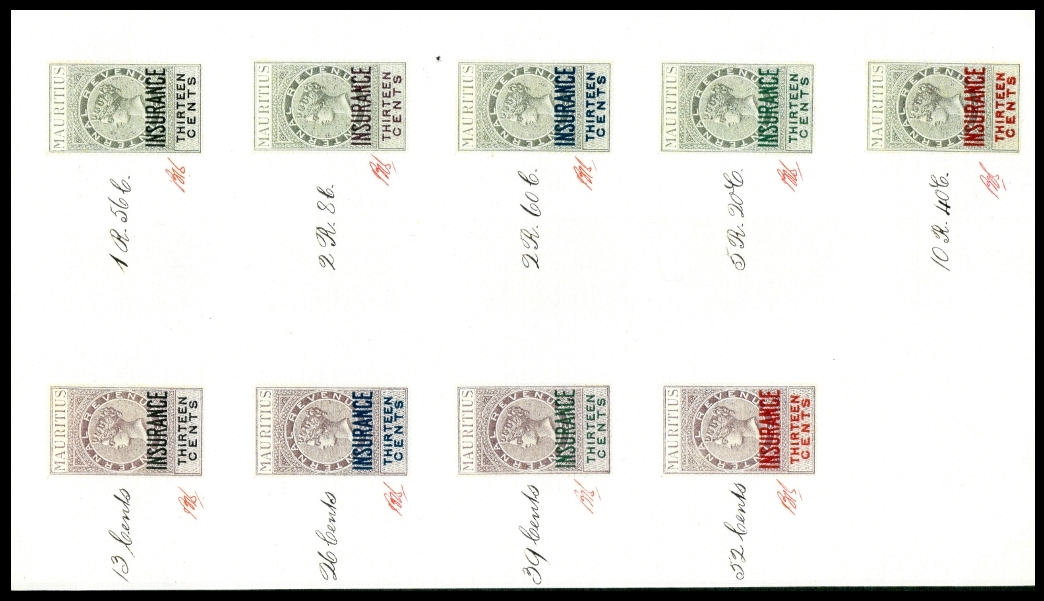 Notes:
1. The above trials are known both as loose stamps (sold in the Christopher Gaertner auction of February 2009) and as a complete set stuck down on Appendix sheet as presented by De La Rue, each value having a different colour combination.  Each trial on the Appendix sheet is initialled, which suggests approval, but these colours were not in fact used for the issued stamps.
2. A similar set but including all the different values in issued colours was also offered in the Gaertner 2009 sale, described as trials on unwatermarked gummed paper.  However in my view it seems just as likely that they were issued mint stamps with faint watermark.
D. Internal Revenue 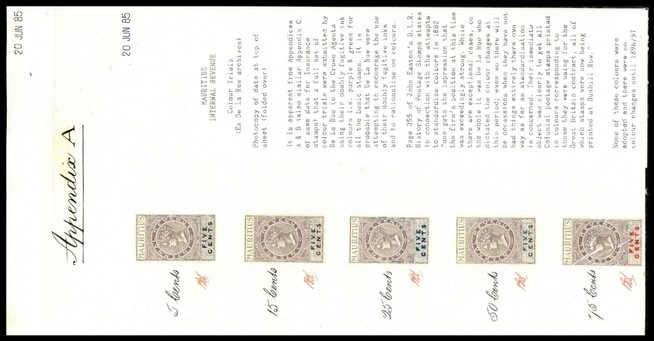 Note: the above trials are currently known only as a complete set stuck down on Appendix sheet as presented by De La Rue.  Each trial on the Appendix sheet is initialled, which suggests approval, but these colours were not in fact used for the issued stamps. 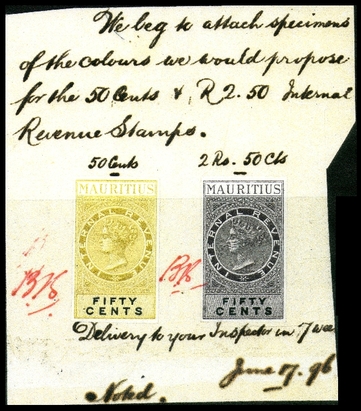 Note: none of the trials on this sheet is marked as approved, though the olive-yellow and blue combination was used for the new 3 rupee value in 1899. 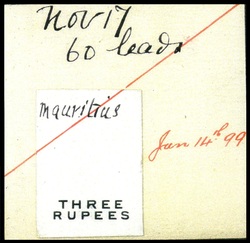