The northern part of Yemen was a kingdom from 1918 onwards, and was then known as Yemen Arab Republic from 1962 until 1990.  The south (the Colony and Protectorate of Aden) was under British control until independence, and subsequently became known as the Federation of South Arabia (1962-67), the People's Republic of South Yemen (1967-70), and then as the People's Democratic Republic of Yemen (1970).  A new constitution to unite north and south was drafted in November 1989, and the united Republic of Yemen was declared on 22nd May 1990.

Grateful thanks to Joe Ross for providing almost all the images shown on the original version of this page, and to Leo Malz and Peter Winders for their significant contributions in terms of new information and images.

A1/2
1971.  Aircraft and terminal.  Inscribed Air Departure Fee in Arabic and English, with Taxation Department in Arabic above aeroplane.  Printed by De La Rue. 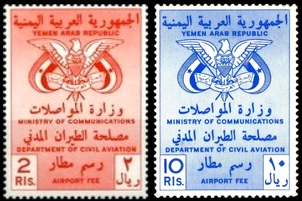 C1 printer's sample in unissued colour
Notes:
1. The date of issue is likely to be no later than 1948, since the Imam named in the central inscription was assassinated on 17th February of that year.
2. The example of C3 illustrated above shows an unidentified purple cachet which may be a cancel or an overprint.  If it is the latter, I assume it also exists without.
3. The 5b also exists as a Waterlow printer's sample in orange-brown as illustrated here.
4. The 5b and 10b are also known (in issued colours) with Royalist overprints, as shown below.  These are postage stamps and are listed by Gibbons as SG R58b and R38/a. 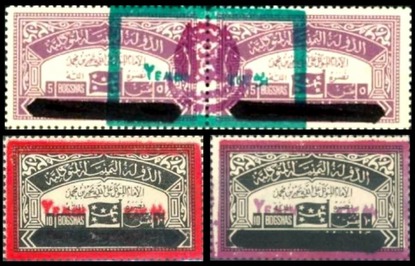 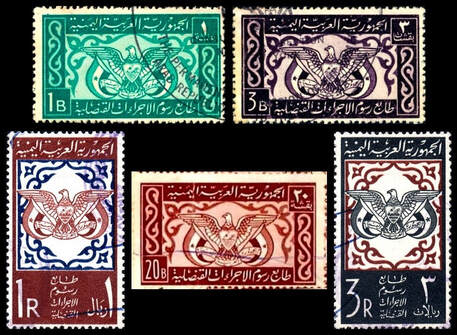 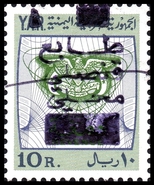 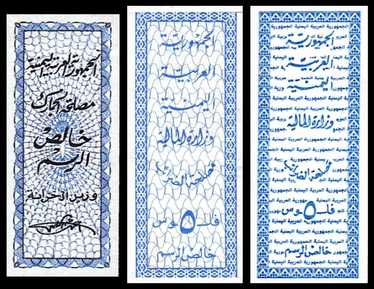 b) 1983: Inscription as X2 but now with security background of Arabic script
[X3. 5f blue]

Notes:
1. No issued examples of X1 or X3 have been recorded to date.  The only known examples are the printer's proofs illustrated above.  Each proof is mounted on an approval card with a dated signature to show when the designs were approved for printing.  The cards are dated 1st August 1968 for X1 and 22nd March 1983 for X3.
2. The date of issue for X2 is not known but it presumably must be no earlier than 1975, since it was in this year that the currency changed from bogaches to fils.

The imperforate label illustrated here is probably not a true excise revenue stamp though it seems to have been issued by the Yemeni Ministry of Finance.  It measures 44 x 22 mm and depicts a coffee plant, with the inscription Department of Taxes Domestic Product.  It may have been issued as a quality assurance label.
Judicial

J1/7 (no better image currently available)
1972.  Koran, scales of justice and Yemeni arms.  Inscribed (in Arabic) Yemen Arab Republic at top and Judicial Fee Stamp at foot, with The Noble Koran across the pages of the book.  Printed by De La Rue.  Arms, book and inscriptions in green; background colours given. 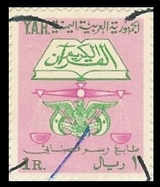 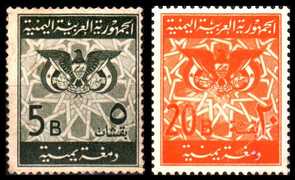 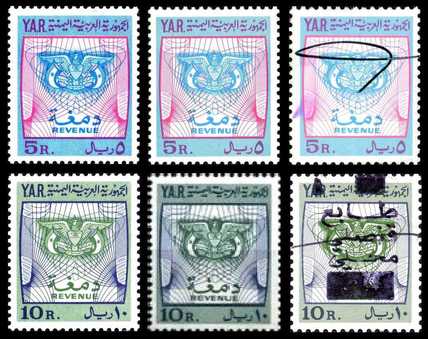 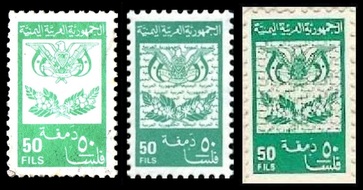 Note: three values in this design are known as imperforate stamps on coloured paper (see illustration above right).  It is not known whether these are proofs, issued stamps or bogus productions. 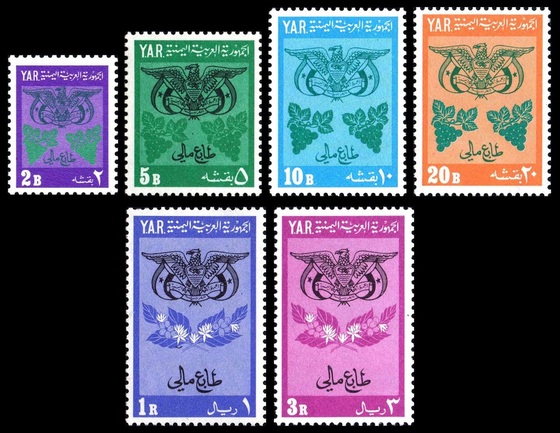 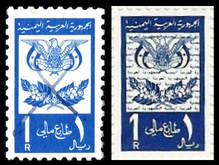 Notes:
1. S42/44 all seem to have been on sale simultaneously, which suggests that the different colours relate to purpose rather than successive issues.  Further information would be welcomed.
2. Earliest recorded usage: 1995 (S31 and S33).
Stamp paper

Note: Z1 is currently recorded only as printer's archive material with SPECIMEN perfin.  The specimen sheets (several examples are known) are handstamped with the date 22 SEP 1972 on reverse, suggesting an issue date of late 1972 or early 1973.
Appendix

The issues in this section are not revenue stamps but do not qualify for full listing elsewhere as postage stamps, so are noted here for the interest of collectors.

Note: these three values are footnoted by Stanley Gibbons (after SG 58/64) as unissued postage stamps emanating from stocks looted from Government stores during the 1948 revolution.

Two die proofs are shown below: a master die in ultramarine for the 10b and 20b without figures of value, and of the 1i in black.  In addition the set of 3 is known with a diagonal overprint FREE YEMEN FIGHTS FOR GOD, IMAM & COUNTRY in Arabic and English.

Notes:
1. The 1b, 5b and 10b values of this set are listed by Stanley Gibbons (SG 105a/c) as 'unissued official stamps issued for ordinary postal use without surcharge'.  The status of the top two values is unknown.
2. The 20b value is known with a diagonal Saggio ​(=Specimen) overprint.
Previous page: United Arab Emirates
Next page: Yemen (Southern / People's Democratic Republic)
Back to Middle East main menu