Note: the official name of the country since 1976 has been Great Socialist People's Libyan Arab Jamahiriya.  The last word - an Arabic term generally translated as state of the masses - was a neologism coined by Muammar al-Gaddafi, meaning something like people's republic.

No Libyan revenue stamps of the post-Gaddafi era have surfaced to date (April 2012).
Airport Tax 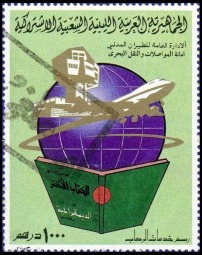 c1985.  As A1 but inscription at top changed to Great Socialist People’s Libyan Arab Jamahiriya, and value in Western numerals at lower left.  41½ x 53½ mm.  Perf 10½.  No watermark.  Multicoloured; background colour given.

C101/103
1970 (earliest recorded usage).  Arms of Libya showing the Eagle of Saladin facing left.  Inscribed Libyan Arab Republic at top and Revenue at foot, with currency in Libyan pounds.  22 x 26½ mm with wide margins all round.  Perf 11½.  No watermark.

C111 and C116/7
1980 (earliest recorded usage).  Arms of Libya redrawn showing the Hawk of Qureish facing right, and change to new currency (dinars).  Inscribed Libyan Arab Republic at top and Federation of Arab Republics on the scroll held by the hawk.  23 x 28 mm.  Perf 11½.  No watermark. 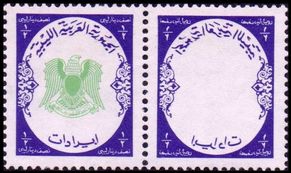 C116a (on right, se-tenant with normal)
a) Figure of value below text in all four corners


b) Figure of value now above text in lower corners, the 1d redrawn with clearer inscriptions


Note: The Federation of Arab Republics was an affilation of Libya, Egypt, and Syria, which began in January 1972 and lasted for nearly six years.  Although the Federation officially ended in November 1977, Libya's Consular and War Tax stamps continued to show the Federation's Coat of Arms until well into the 1990s.

Note: several examples of C122 are known with a vertical perforation shift of about 3mm, all used in Bangladesh.  These appear to be genuine. 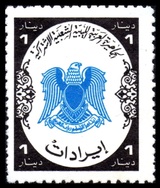 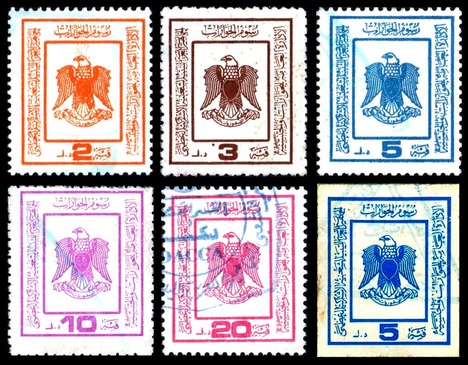 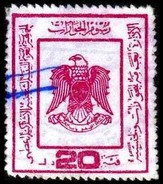 Notes:
1. The earliest dated examples of C142/6 are all rough perf, with clean-cut printings appearing from 1997 (2d and 20d), 1998 (5d) and 1999 (10d).  The 3d has not been recorded with clean-cut perf.
2. A stamp similar to C146 but with a saw-tooth perforation measuring 14½ was formerly listed here but is now thought to be a forgery intended to defraud the Libyan authorities.  Examples are similar in size and shade to the genuine stamp and the overall impression is well executed.  The only recorded usage of these stamps is on passport pages cancelled in Dacca (Bangladesh), suggesting that this may have been the place of their manufacture.
3. The watermark is found upright on all three values (C174/6) and is also known inverted on the 5d and 10d.
Medical fee 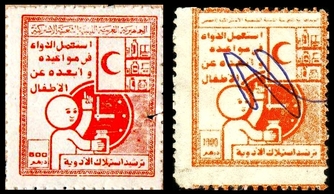 The inscription above middle left seems to be a warning to keep medicines out of the reach of children.  The top inscription differs between the two values but the printing is too small to be legible.
Municipal 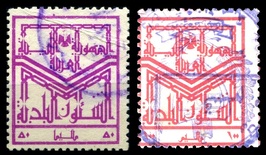 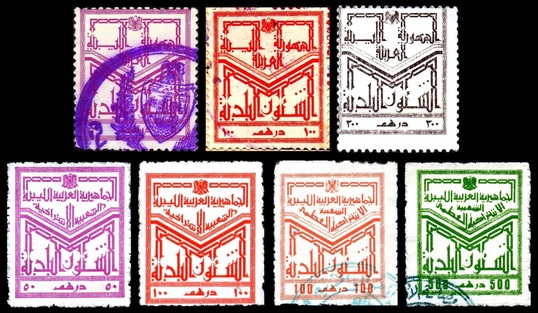 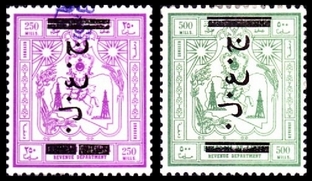 R107/8 (other images to be added)
c1970?  Oil wells types of Libya (Kingdom Federal issues) overprinted with the Arabic initials for Libyan Arab Republic (sideways, reading downwards from right to left), and black bars cancelling the Kingdom of Libya inscriptions at top and bottom.

Note: R113/223 are all based on the same design of a central octagon with rounded edges, surrounded by four rectangular panels.  The top and bottom panels give the country name and value respectively, while the side panels describe the appropriation.

The various types can be difficult to distinguish, but the following three main sub-divisions should help with identification:
An illustrated key to all the sub-types can be found here. 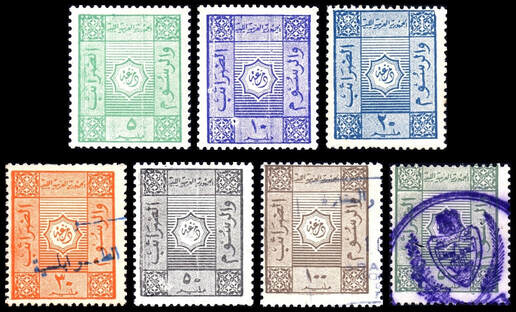 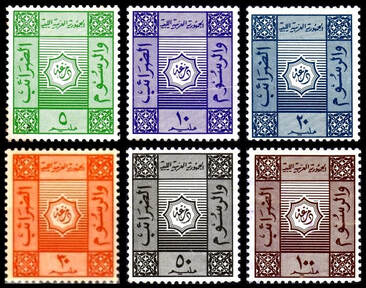 Note: R144 is known with either rough or clean-cut perfs. 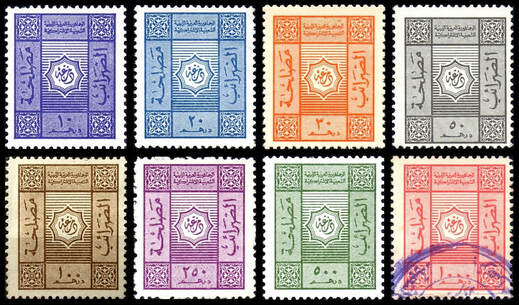 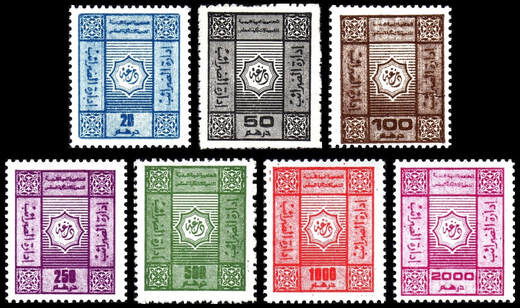 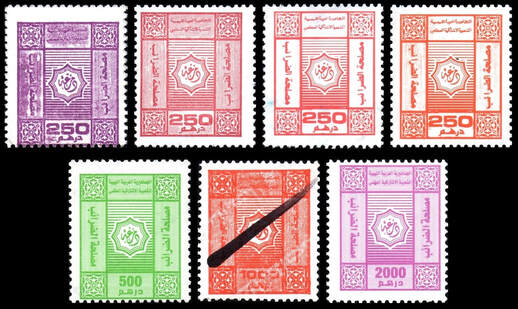 Notes:
1. The shades of the 250dh are easy to distinguish; in addition R202b/c have little or no shading in the inscription panels, in contrast with R202/a.
2. The figures of value are narrow on R205 and R207 and wide on the rest.

Note: The issue date of R223 is unknown but the country name inscription suggests no earlier than January 2018.
War Tax

Note: the adhesives listed under this heading were formerly categorised as Consular stamps on the grounds that they are almost always found used on passport pages.  However the Arabic inscription at the foot of the stamps (rasm al-jihad) is best translated as War Tax, which in the context of 1970s-80s Libya probably meant a relief fund to aid victims of the Israeli-Palestinian conflict. 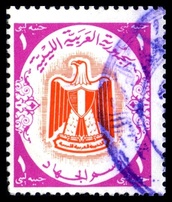 1980.  Arms of Libya redrawn showing Hawk of Qureish facing right.  Inscribed Libyan Arab Republic at top and Federation of Arab Republics on the scroll held by the hawk.  23 x 28 mm.  Perf 11½.  No watermark. 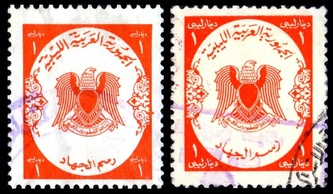 b) Redrawn type with clearer inscriptions, figure of value now above text in lower corners 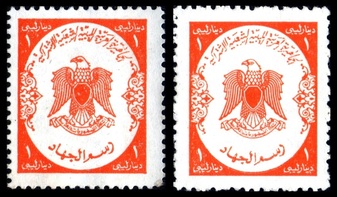 Notes:
1. Specialists may wish to distinguish clean-cut and rough perf varieties of W121, though the difference is no longer considered significant enough for a separate catalogue listing.

2. Stamps as W121 but with a saw-tooth perforation are now regarded as forgeries.  For further details, see footnote 2 below C164.

3. It will be noticed that W101, W111/6 and W121 correspond to Consular issues C101/3, C111/7 and C121/2 respectively.  The latest Consular issues of Libya (C131/64 with value in Western numerals) have no equivalent War Tax stamps, which suggests that the use of War Tax stamps may have ceased in the late 1980s or 90s.
Previous page: Libya: Kingdom federal issues
Next page: Oman
Note: an illustrated key to Libyan revenues since 1943 can be found here
Back to Middle East main menu