Grateful thanks to Mr Konrad Kolankiewicz for his scans of a number of items on this page.  Thanks also to Ricky Verra of David Feldman SA for bringing the Courvoisier proofs (see footnotes under R51/4 and R72/8) to my attention, and to Tony Frost for highlighting the existence of R70/71.
Insurance

I1
Early 1960s.  Oil rig and handshake.  Inscribed Arab Insurance Fund for Oil Workers at top, with Qatar 1 rupee in circular panels at foot.  One side or two adjacent sides imperforate.

I1. 1r slate-blue and carmine

Note: the exact date of issue is unknown but it is likely to be before 1966 since the value is in Indian currency, which was replaced by the riyal in that year.
Revenue

Note: the next three issues are based on similar vertical designs showing the flag and Arms of Qatar in an ornamental frame.  The three types can be distinguished as follows: 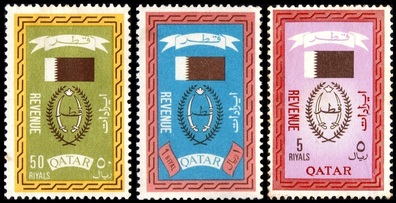 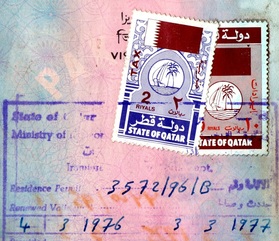 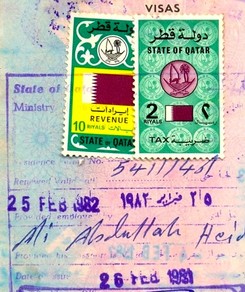 Note: Proofs of the above issue were offered in the David Feldman sale of April 2013, mounted on a Courvoisier archive sheet dated 1980 (ref 1813/48).  The series was presumably commissioned that year and issued later in 1980 or early in 1981.  The earliest recorded usage is February 1981 as illustrated here. 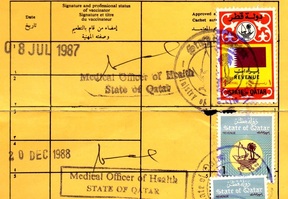 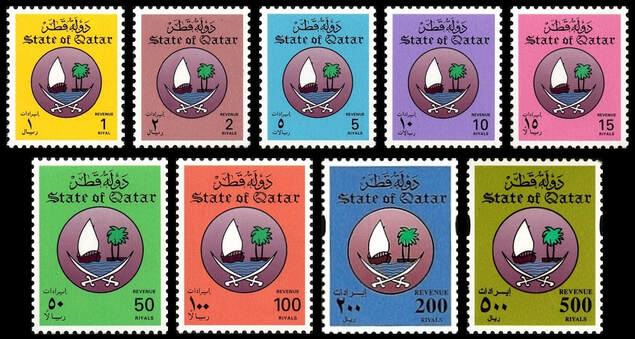 R70/78
1996 (see note 1).  Arms of Qatar.  25 x 33 mm (50r and above) or 21 x 26 mm (others).  Perf 11½ x 12.  No watermark.  200r & 500r are slightly different, having larger seriffed font in inscriptions at lower right, an elliptical perf at each side and an underprint on the gummed side consisting of the State Arms eight times in a diagonal line.  Arms multicoloured, inscriptions in black, background colour given.  Printed by Courvoisier.

Note: proofs of the above issue were offered in the David Feldman sale of April 2013, mounted on Courvoisier archive sheets.  The proof set to 100r was on a sheet dated 1996 (ref 5262), from which I infer that the series was issued then or in early 1997 at the latest.  The 200r and 500r were on a separate undated proof sheet (ref 5446) and were presumably issued later than the lower values.
Revenue usage of Postage stamps 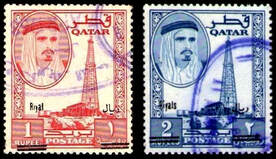 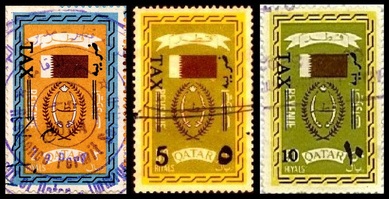 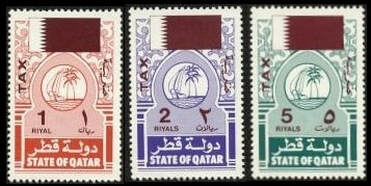 Note: a piece showing the earliest recorded usage of this issue is illustrated alongside R41/44 above. 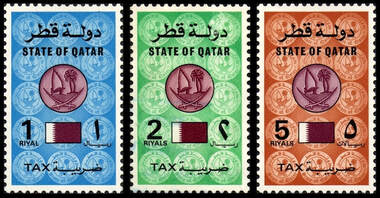 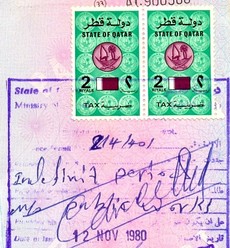 Note: proofs of the above issue were offered in the David Feldman sale of April 2013, mounted on Courvoisier archive sheets. 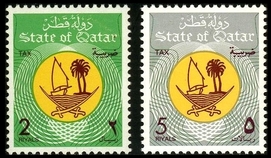 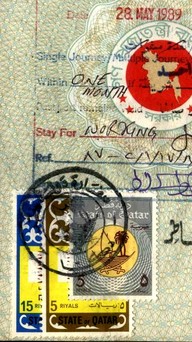