1978.  As above with Gratuit obliterated and surcharged in manuscript in red pen.

G6/8
1986 (recorded usage).  Similar labels but with the Chamber inscription in Arabic only (at top), and with the city name Bonn printed in the centre of the stamp at foot.

​Notes:
​1. G6 and G8 were reported in 2008 by Akerman and Barnes.  It is possible that they were issued prior to G1/2, or at the same time as them for a different purpose.
2. Recorded usage: G7 July 1986.
Arab-Italian Chamber of Commerce 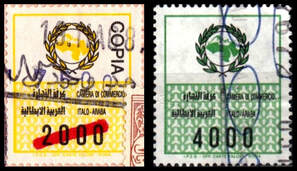 I1/2
1986-92 (recorded usage).  Dimensions unknown.  United Nations symbol.  Inscribed Arab-Italian Chamber of Commerce in both Arabic and Italian.  Currency not specified but presumed to be Italian lire.  Perforation and watermark unknown.  Printed by the IPZS in Rome and bearing their imprint at foot.

Notes:
1. I1 is additionally inscribed Copia (=Copy) in Italian only at top right.  The only example I have seen to date has a thick red line diagonally across the figures of value.
2. Recorded usage: I1 May 1987, I2 February to December 1986. 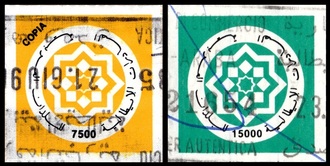