Thanks to Mr Mashad A Almajeri for supplying information on a number of Kuwait items, and to Jay Hickey for his images of the Free Kuwait labels.
Authorities 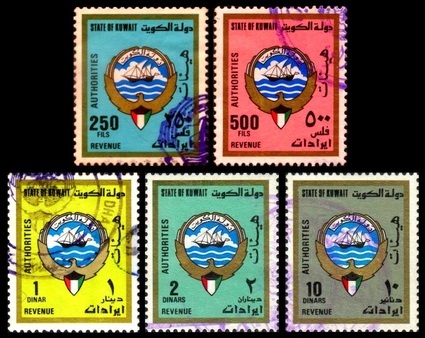 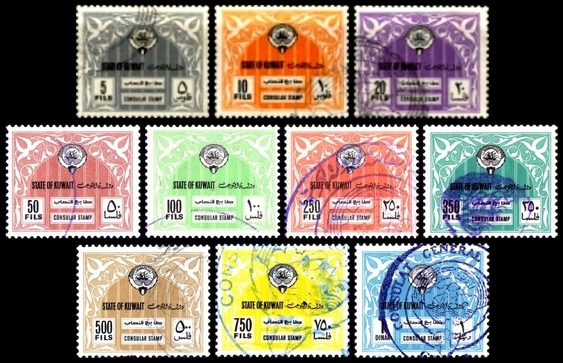 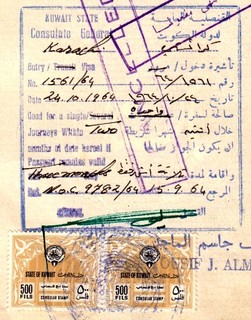 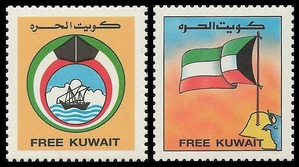 L11/12
1991.  Arms and Flag of Kuwait.  Inscribed Free Kuwait in Arabic at top and in English at foot.  Multicoloured. 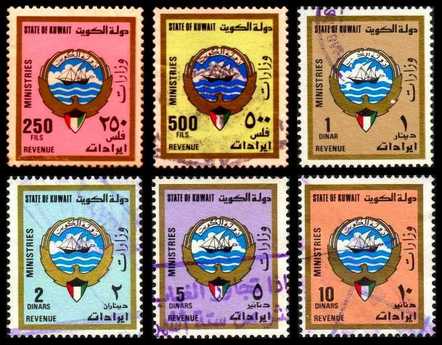 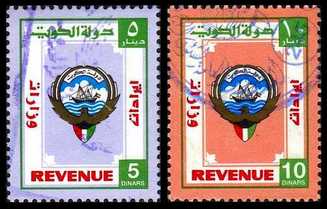 M13/14
1992 (earliest recorded usage).  Arms of Kuwait (multicoloured) in green frame, with inscriptions in green and red.  Similar to Revenue issue of 1982 but different size (21 x 28 mm) and additionally inscribed MINISTRIES in Arabic at left.  Perf 13½.  No watermark.  Background colour (given below) extends into the margins.

Note: for a similar design without Arabic inscription at left, see Revenue R22ff below.
Revenue 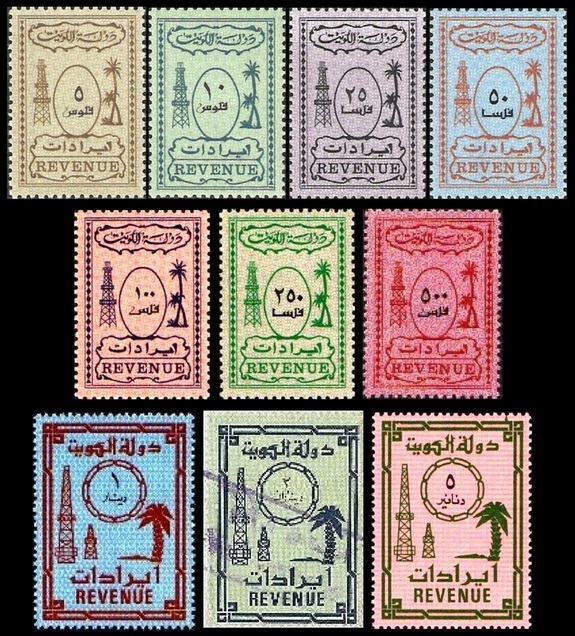 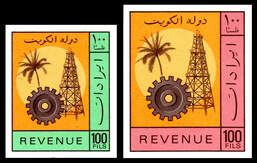 Notes:
1. A complete mint set of this issue is known on a record sheet from the printer's archive, which gives the following additional information: 2. The archive of the Swiss printer Courvoisier SA contains a group of unadopted Kuwait revenue essays, presumably for the 1977 issue.  The essays are in two different sizes (21 x 25½ mm and 24½ x 30 mm) as illustrated here and exist in a range of colour combinations. 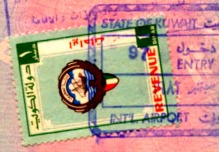 For a similar design with an additional Arabic inscription at left, see Ministries M13/14 above. 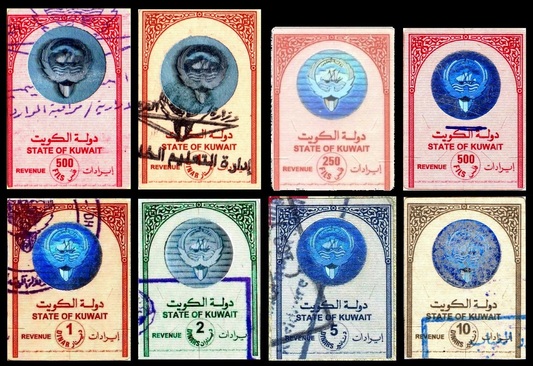 Notes:
​1. A correspondent has informed me that this issue was printed by Harrison & Sons.
2. Earliest recorded usage: July 1995 (R33). 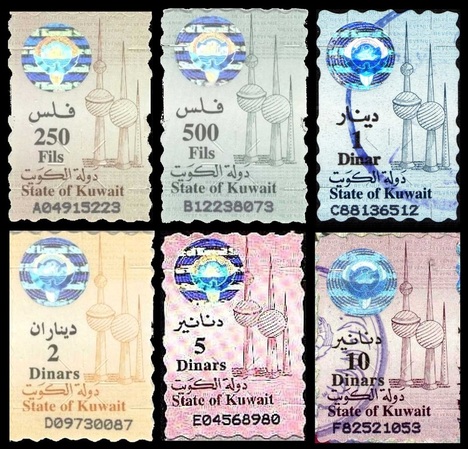 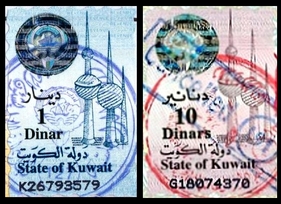 
The 1d prefixed K and the 10d prefixed G are probably from later printings.  The earliest recorded usage of the 10d G is February 2004. 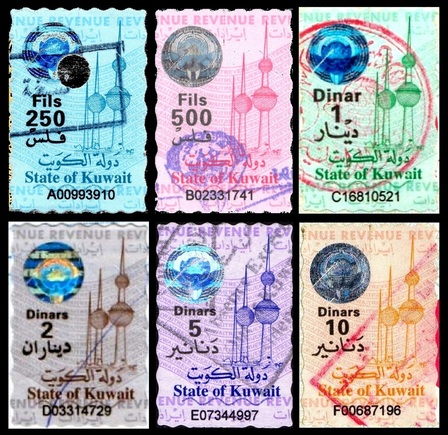 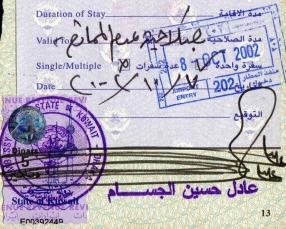 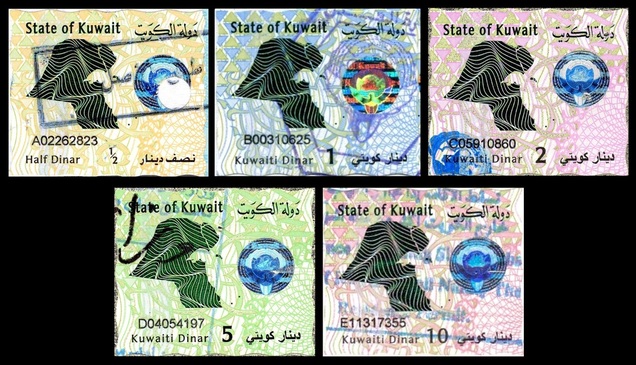 R61/65
2008 (earliest recorded usage).  Stylised map of Kuwait.  No watermark.  Self-adhesive.  Fluorescent band at left with repeated letters SK (= State of Kuwait) reading downwards.  Arms in hologram, map and inscriptions in black, security pattern in olive-green.  Background colour given.  Unique security number in black towards foot of stamp - prefixed A (½d), B (1d), C (2d), D (5d) or E (10d).  Figure of value towards the centre at foot of stamp. 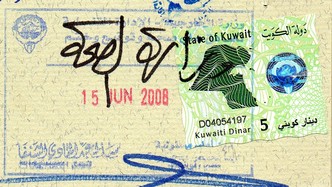 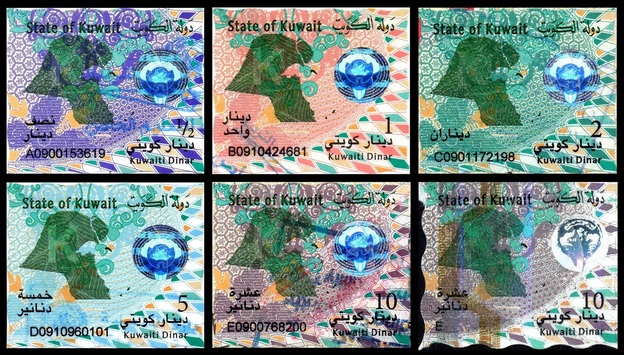 Note: the second example of the 10d illustrated above has a slightly coarse impression and the security number is blank other than the initial letter.  It may be a printer's proof but may also be a forgery.  The forging of Kuwaiti revenue stamps was reported in the December 2012 edition of The Revenue Journal.

The last four revenue issues of Kuwait were sold in sealed packs as shown here. 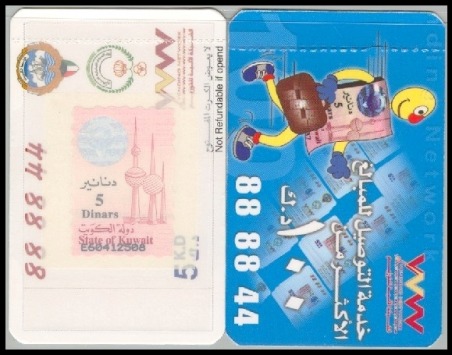 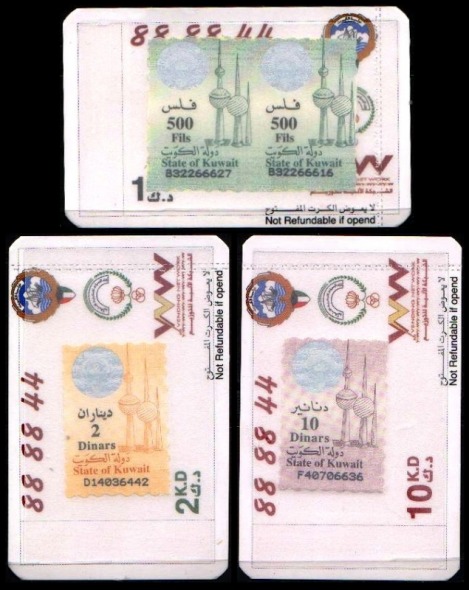 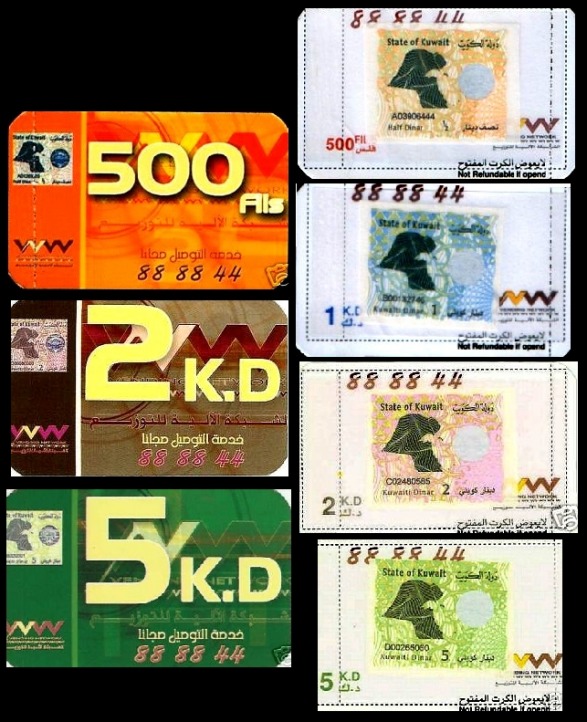 X21/24
2009 issue in sealed packs.  Stylised map of Kuwait with figure of value in lower centre.

X32 (front and back)
2012 issue in sealed pack.  Stylised map of Kuwait with figure of value at lower right.

Note: the stamp illustrated on the outside of the pack is in fact the 1-dinar stamp from the previous issue.  It is possible that a new pack will be introduced soon with an updated image.
Savings stamps
?1960s.  Emblems of thrift and productivity, with banner reading Bank of loans and savings.  Inscribed Idkhar (=Savings) at top and Kuwait in Arabic below banner.  22½ x 26½ mm.  Roulette 9.  No watermark.  ENSCHEDÉ imprint at foot.


?1960s.  Similar type but Arabic inscription at lower right (FILS) redrawn, and without ENSCHEDÉ imprint.  Roulette about 8.  No watermark. 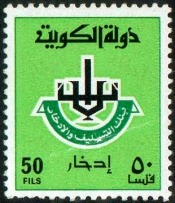 P1/4
1947-50.  Undenominated Post Office labels issued to commemorate the anniversary of Sheikh Ahmad Al-Jaber Al-Sabah's accession to the throne of Kuwait.  Approx 25 x 38 mm.  Inscribed Anniversary in English and Arabic, with dates indicating the year of the Sheikh's accession and the year of issue, all dates being shown according to both the Hijra and Western calendars.  Perf 11 (P1), perf 11½ (P2), perf 12 (P3) or perf 12½ (P4).  No wmk. 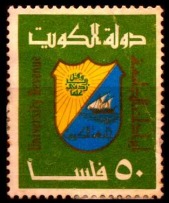