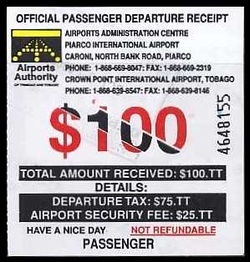 Notes:
1. It seems logical that F3 must exist without the R deleted though it is not recorded anywhere.
2. The illustration above right (reproduced from Marriott, Medlicott and Ramkissoon) shows the 2½d bright blue similarly overprinted though in a shorted, wider seriffed font, plus the same stamp with a bar cancelling halfpenny in the value tablet to produce a 2d on 2½d surcharge.  These were prepared for use but not issued, though a postally used example (presumably by favour) of the latter is known.
​3. Illustrated at right is a 1d carmine overprinted FEE in wider font than F1, plus a ½d dull green postage stamp bisected and surcharged Fee ½d.  I follow Barrow in regarding these as forgeries, though the ½d bisect is listed in Morley's catalogue.
4. Earliest recorded usage: January 1889 (F3).

Notes:
1. Barrow notes that the ½d dull green and 1d carmine are commonly found with postal cancels, and suggests that they were originally issued as postage due stamps rather than revenues.  Apart from these two values, the rest of the set was not issued in these colours without FEE overprint.
2. Morley lists the 5s on blued paper, which I have not seen.
3. The Postage Due 1d with the same overprint (listed by Barefoot as an issued stamp with only one known example) is an unadopted artist's essay based on a 3d stamp with the figures 3d painted out in white and 1d handpainted on top.
4. Barefoot also lists the 5s overprinted in black rather than blue.  Although I have seen examples of F18 with overprints which might be described as deep grey, in my view these are shades of the blue overprint and not the true black found on F11/12 and F14/15.
5. Earliest recorded usage: May 1884 (1d carmine), 1892 (3d), March 1889 (6d), September 1888 (1s), June 1887 (5s), January 1889 (10s), May 1894 (£1). 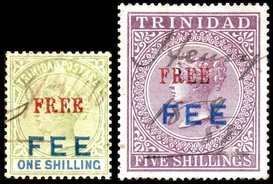 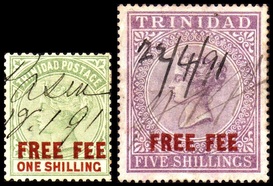 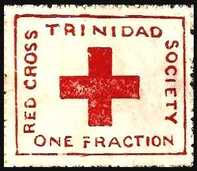 Note: this label is listed in Gibbons as a postage stamp since its use for postal purposes was authorised for one day in September 1914.

L11/16
1944.  Propaganda labels similar to contemporary postage and revenue stamps of Great Britain but incorporating Communist and/or Jewish symbols, overprinted LIQUIDATION OF EMPIRE TRINIDAD in rectangular frame.  Printed in Germany under the authority of the Nazi government.

L11. ½d green (opt in red)
L12. 1d red
L13. 1½d red-brown
L14. 2d orange
L15. 2½d ultramarine (opt in red)
L16. 3d violet
National Insurance
Note: the National Insurance stamps of Trinidad and Tobago are known only as mint examples or with Specimen perfin, both of these emanating from the printer's archive.  It is not known for certain which of the stamps in this section, if any, were actually issued.  The sequence of sets as listed here seems the most logical one, but all the dates are guesses.

N1/9
c1970s.  Inscribed Trinidad and Tobago National Insurance in oval around coat of arms, with value in figures shown at top.  Each denomination additionally indicated by a code in Roman numerals from I to VIII in centre of stamp.  Perf 11½.  Printed by Bradbury Wilkinson (imprint at foot of sheet) in sheets of 100 (10 rows of 10).  Inscriptions in black.

N11/19 plus $7.35 trial (see footnote)
c1980s.  New type without coat of arms, inscribed Trinidad and Tobago National Insurance in oval as before but with design also incorporating the inscription Republic of Trinidad and Tobago National Insurance.  17½ x 21 mm.  Value indicated in figures and by a class code in Roman numerals (or letter Z on N11).  Perf 13 x 12½.  Printed in sheets of 100 (10 rows of 10).  Value, class code and oval inscriptions in black.

Note: illustrated above with N11/19 is a $7.35 value in grey-blue with Roman numeral VIII.  This seems to have been printed using the same duty plate as N9 above, and was probably a trial designed to check the fit with the new frame plates; the figures of value on N11/19 are slightly smaller.  I presume that the $7.35 [VIII] was never issued, but came onto the market along with the other values when the printer's specimen sheets were released from the archive.

Notes:
1. As with the previous issue, it seems that the duty plate of N9 was used along with the new frame plate as a printing trial.  The $7.35 trial in grey-blue with Roman numeral VIII is illustrated above with N21/29.
2. No stamp with Roman numeral VI has been recorded for this set.
3. Barefoot lists N21/29 as being issued before N11/19, which is possible but in my view unlikely since I believe the change of type was intended to make the second issue more legible than the first. 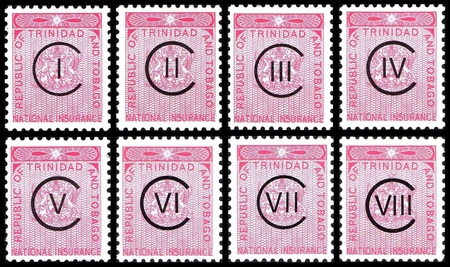 N31/38
c1980s.  New Coat of Arms type, inscribed Republic of Trinidad and Tobago National Insurance around edges of central panel.  No monetary value shown but denomination indicated by a code in Roman numerals, surrounded by the letter C (=Class of National Insurance).  Perf 11½.  Printed in sheets of 100 (10 rows of 10).  C and Roman numerals in black.

Note: sheets of N38a have a marginal imprint letter of either C or D (presumably plate or cylinder letters) below the first stamp in the last row.
Opium Duty

O1/2 (detail)
c1880.  Excise strips, 335 x 33 mm, each consisting of five panels inscribed Customs Opium Trinidad, an instructional panel (The Vendor is required, etc) showing the weight of opium on which duty is paid, and a coloured embossed label bearing the Coat of Arms and inscribed Trinidad Duty on Opium.  Perf 14 x imperf.  No watermark.

Note: the design of this issue is based on the tobacco excise strips used in the United Kingdom from 1863 onwards.
Revenue stamps
Note: adhesive impressed / embossed revenue stamps are listed separately in the next section.

Notes:
1. According to Gibbons, the above stamps were introduced on 1st July 1879, then authorised for postage from 1st August 1879 pending the arrival of dedicated postage stamps.
2. Similar stamps but additionally inscribed Postage below the Queen's portrait were issued from 1880 onwards.  To date I have not seen any of these used fiscally.
3. Forgeries of the above issue were produced by Oneglia in the 1890s or 1900s, as illustrated above right.  They are easily distinguished from genuine stamps by the coarse impression and the jagged perforations.

Note: this stamp is known from a single piece dated 1880 which bears five examples tied with manuscript fiscal cancels.  The piece has a BPA certificate of genuineness.  Caution should be exercised in purchasing any example without expert certification.

Notes:
1. Barefoot lists a printing of the £1 value in purple as well as the mauve issue of 1884, though I have not seen this.  Both Morley and Forbin list the 1s in two distinct shades - green/grey-green (Morley) or yellow-green/sea-green (Forbin) - while Barefoot lists a 1s in yellow, which I have not seen.  I follow Morley in making one set of the 1d to 6d with dull purple head plate and another set (my R11/15) of all the others; Forbin and Barefoot each put a 1s green in the 1890 series.
2. Morley notes that the 4d is known imperf but I have not seen this.
3. Earliest recorded usage: 1898 (1d), 1891 (6d).

Notes:
1. Two colour trials were prepared for each value, the unadopted colours being violet for the 4c, dull purple for the $1.20 and chocolate for the $4.80.
2. Proofs as R32/3 with the portrait of King George VI were prepared in October 1938, but rejected in favour of a similar type with the word Revenue removed from the design (see S255/6 below).

1. All stamps were printed in sheets of 60 by Somerset House, London.  The country name was typographed first in black, then the design added in grey or blue using an inked embossing process.  Similar stamps without the Trinidad & Tobago underprint were issued for Great Britain.

2. Each embossing die is identified by one or two code letters, or by a pair of roses.  The die code for each stamp is given in brackets in this listing.  There are a number of minor variations in design from one die to the next of the same value, relating to the shape of the crown and the position of the die letters.  For further details see the articles by McClellan and Seidelman on the equivalent issues for Jamaica.

3. Printing quantities for embossed stamps are documented in the Crown Agents Requisition Books (now housed in the British Library), beginning in February 1922.  Unfortunately watermarks and die letters are not distinguished in the records, though in some cases these can be worked out by cross-reference to the Foreign and Commonwealth Office collection.  The printings according to the Requisition Books are as follows: 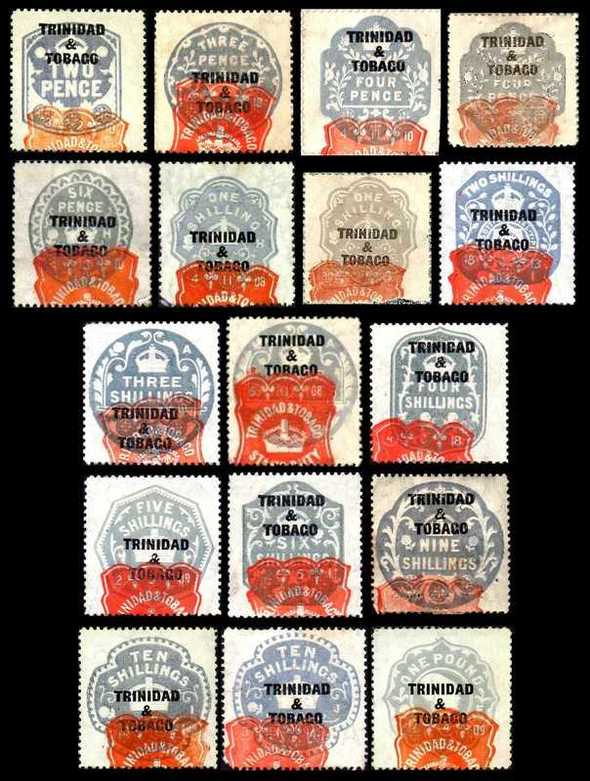 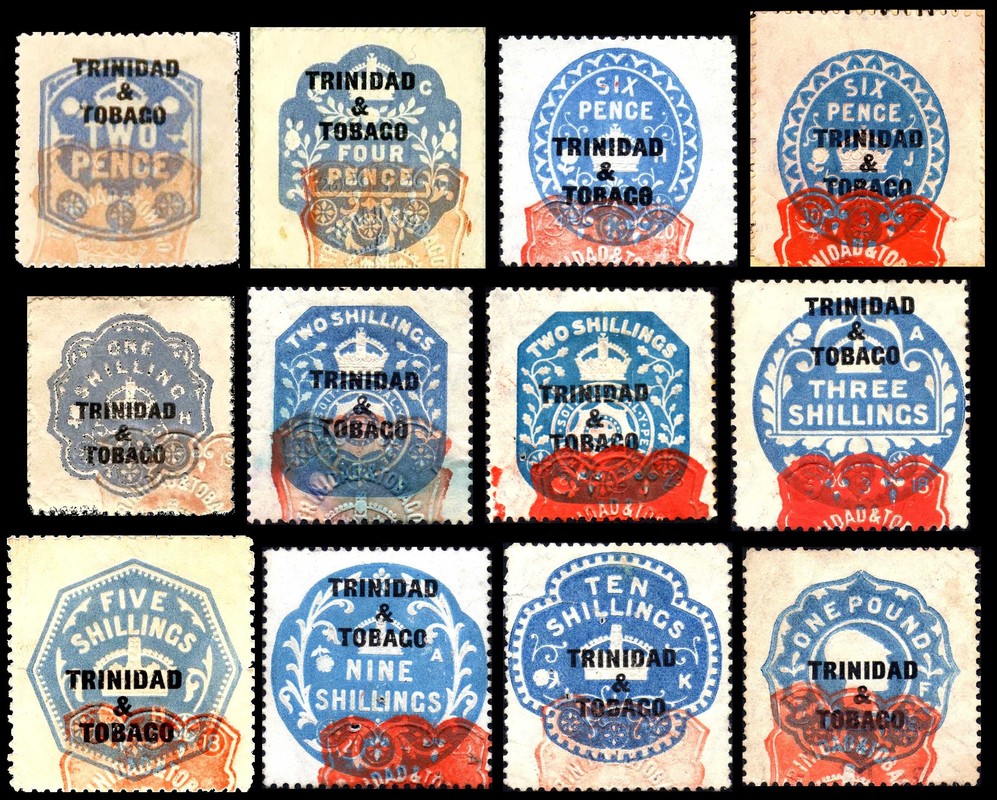 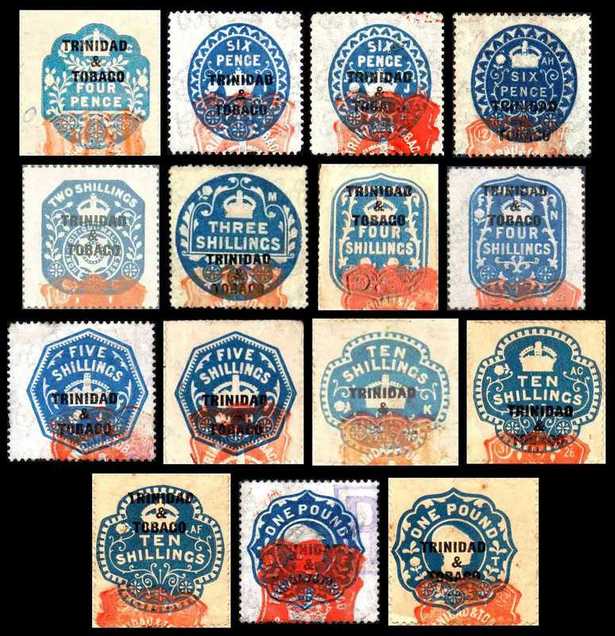 Notes:
1. The values shown in square brackets have not yet been recorded as issued stamps, but their existence is known from the Crown Agents Requisition Books.  In these cases the date of dispatch to Trinidad is given in brackets where recorded.
2. The £5 value is in larger format, approx 42 x 45 mm.
3. For print quantities see the general notes at the top of this section. 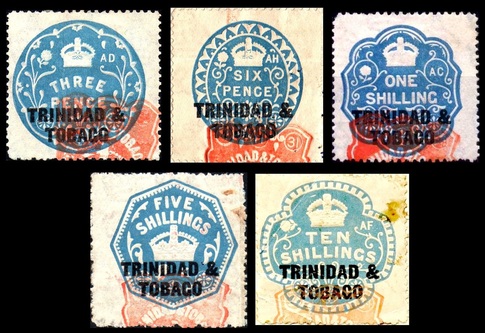 Y62/70
1930-34.  As previous issue but now overprinted Trinidad & Tobago in two lines of larger sans-serif font, 22 x 8 mm, with the overprint placed towards the foot of the stamp on all values.  Perf 12.  Wmk Multiple Script CA.

Notes:
1. The values shown in square brackets have not yet been recorded as issued stamps, but their existence is known from the Crown Agents Requisition Books.  In these cases the date of dispatch to Trinidad is given in brackets where recorded.
2. The Crown Agents Requisition books record the 4d, 2s, 4s and £1 values as having been reprinted in 1933 and 1934, after the two-line overprint had been introduced.  It seems likely that these reprints were made using the two-line overprint - in fact Barefoot lists the 4d (C) and 2s (G) as well as the 6d (AC) - but I have not seen any of these.
3. For print quantities see the general notes at the top of this section. 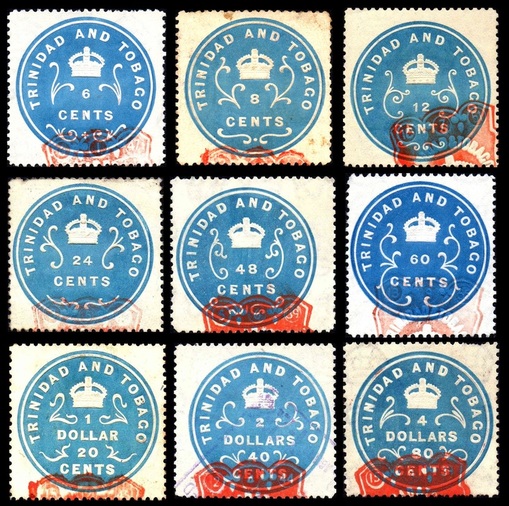 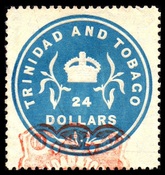 Note: the existence of the $120 is known from the Crown Agents Requisition Books, but I have not seen an example. 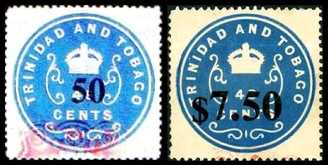 Note: Y102 and Y103 have not yet been recorded as issued stamps, but their existence is known from the Crown Agents Requisition Books, as shown in the printing schedule below.

Printings:
Clearly there must have been at least one subsequent printing which included the $7.50 on 48c stamp, but I have not yet been able to find any further details in the Requisition Books.
Direct embossed

Note: essays are known for 6d and £5 values in similar designs, with date plugs (6d) or without (£5).  Black and white images of these essays - taken from Robson Lowe's stock in the 1970s - are reproduced above. 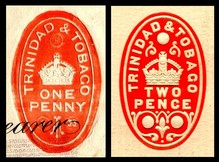 Note: illustrated above is a proof of the 2d value in a similar design, though I have not seen this as an issued stamp.
1961-69 (recorded usage).  Similar to previous issue but redrawn with a die letter at foot, and value now shown in decimal currency.  17 x 28 mm.  Die letters and recorded dates of usage shown in brackets.

Note: Barber also lists the 5c with die letters C, G and H, plus the 2c and 4c values in similar type.  I have not seen these. 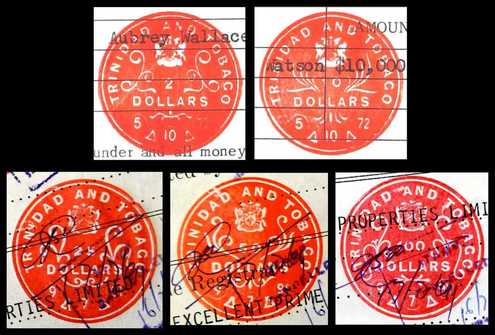 Note: Barber states that this issue was registered on 2nd October 1967.  He lists 13 further values from 5c to $1000, none of which I have seen.
Revenue usage of Postage stamps
Note: for ease of reference, numbering follows the Stanley Gibbons Part 1 catalogue throughout this section.  Values listed here are those recorded as having been used for revenue purposes. 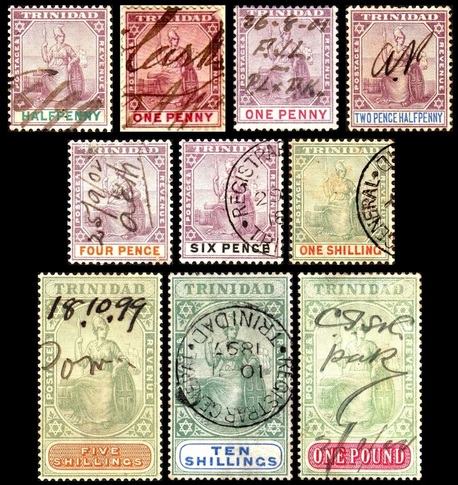 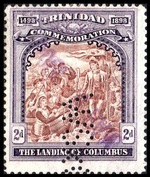 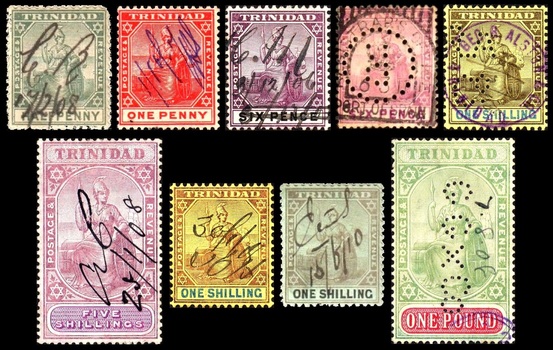 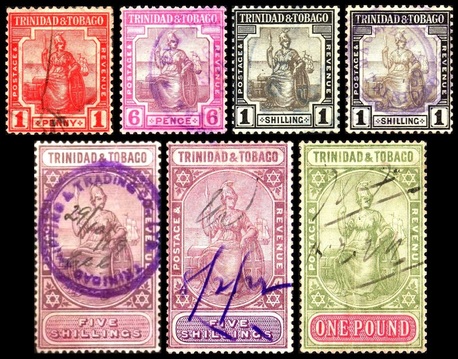 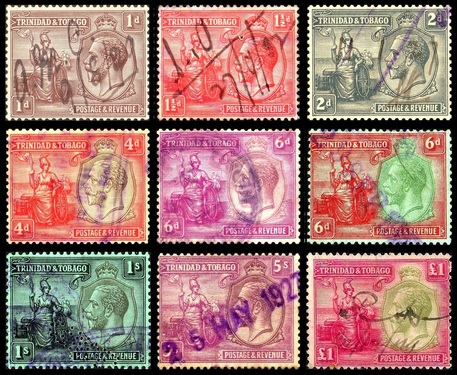 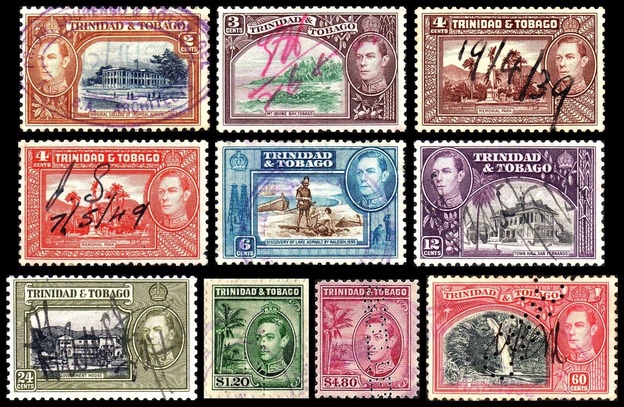 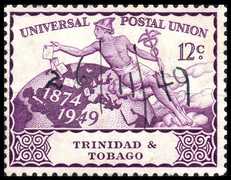 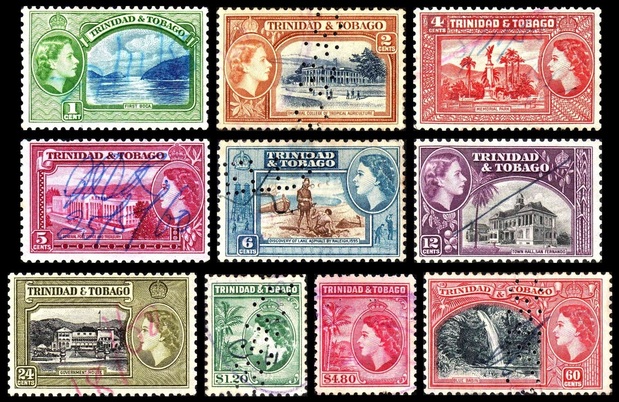 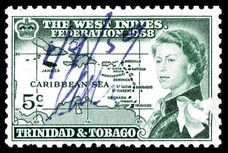 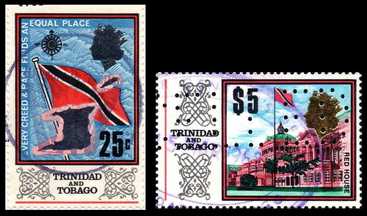 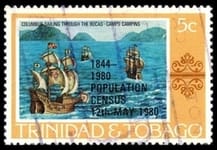