On this page are listed revenue stamps inscribed with the following territorial names:

Grateful thanks to Cal Allen and Thomas Johansen for generously allowing me to incorporate the fruits of their research into Oman revenues.  Thanks also to Carmel Axiaq for providing printing details of the elusive first issue (R1/4).
Airport Passenger Service Charge 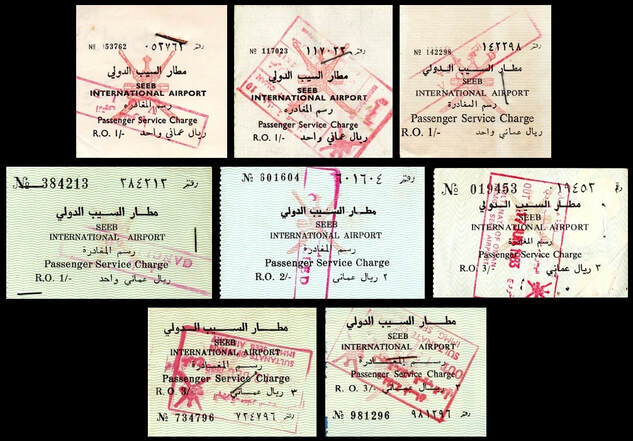 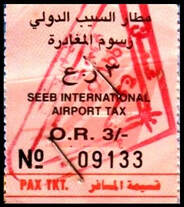 Unidentified value
c1930.  Palm trees surrounding Arabic inscription State of Muscat and Oman, with Revenue in Arabic at top and in English at foot.  37x36½ mm.  Perf 11, one or two sides sometimes imperf.  No watermark.

R1. 8a blue-green
R2. 1r carmine
R3. 5r blue
R4. 10r scarlet
Note: Hardly any examples of R1/4 are known other than in a private document archive belonging to a family in Oman.  A fifth value in black (illustrated at right) has also been recorded, though the image is insufficiently clear to confirm the value, which might be 3 rupees or 30 baiza (=2½ annas). 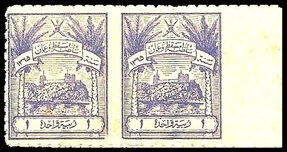 Notes:
1. The 2 anna (which is inscribed one-eighth rupee) and 5 rupee values are currently known only as imperforate proofs in complete sheets (of 20 and 16 respectively), and it is not known whether they were ever issued.
2. The example of R13a illustrated above right is also imperforate between the right-hand stamp and the margin.

Note: the stamps illustrated above are a previously unrecorded type printed by Waterlow & Sons in sheets of 100 (10 rows of 10).  The design includes the Omani coat of arms at bottom left, and is inscribed at foot with the name Dhofar, a region of Oman which at certain periods of history was governed as a separate political entity.  The stamps shown are denominated ½r, 1r, 2r, 3r and 5r, the currency being in rials.  I do not know whether these stamps were ever issued, and would be glad to hear from any reader who can supply any further information about these stamps.  I am grateful to John Copeland for sending me the above images.
c1962 (based on Arabic inscription 1382 AH = 1962-63 AD).  Fort Al Jalali, Muscat.
23½ x 30 mm.  Perf 13½ x 13.  No watermark.

1. The dates of issue are known from the sets of proofs which are housed in the British Library.  The first issue consisted of the set to the 1r.  This was approved in May 1972, and would have been issued later that year.  A new printing of four additional values (1½r, 3r, 10r and 50r) was approved in October 1974, and probably came out by the end of 1974.  The date of issue of the 5r is not known.  The proofs also show Harrisons as the printers and a sheet size of 50, though the format is not known.

I have not seen issued examples of these stamps but it is very likely they exist.  Numbers have been set aside in this listing for their future addition.

3. Barefoot lists a 4r yellow.  I have not seen this value from this series though it may be an erroneous listing for my R58 below.


4. Recorded printings (this list is assumed to be incomplete):
Reprints:

R51/60
1989 (according to Barefoot).  Similar to previous issue but redrawn with Revenue in slightly taller letters, and without the floral background.  All values 22½ x 28 mm (no smaller format for low values).  Perf 14¼.  No wmk.  Printed by BDT International (imprint in lower margin).  Arms and inscriptions in black; background colours given below. 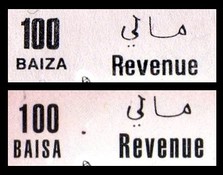 1998 (earliest recorded usage).  Design again redrawn, with the English inscriptions at top in taller thinner letters as illustrated at right.  Perf 13.  No wmk.  Arms and inscriptions in black; background colours given below.