Malaya (Federated Malay States)
Chapter overview
Acknowledgments (see also general acknowedgments on the main Asia page)Grateful thanks to Peter Cockburn for providing a number of scans for this chapter.

Notes:
1. The printer's imprint appears in the sheet margins.
2. The 50c is currently known only with REVENUE overprint (see R14 below).
Impressed revenue stamps
Note: in his 1978 book The Postage Stamps of Federated Malay States 1900-1935, Reeves records photographic essays for embossed / impressed revenue stamps in 12 different denominations ranging from 3c to $250.  These were mounted together on a De La Rue archive sheet, each essay dated 23rd October 1911 and the sheet endorsed Engineers 13th February 1913.  The De La Rue archive also contained undated proofs in orange on laid paper of embossed revenues denominated 3c and 4c.  No examples of the issued stamps have been recorded to date, and it is possible that the essays were not in fact adopted.
Judicial

Notes:
1. J11/13 are only known as mint stamps, and it is possible they were not issued.
2. J16 is known used only in Negri Sembilan, the one recorded example having a Sep 1901 cancel. 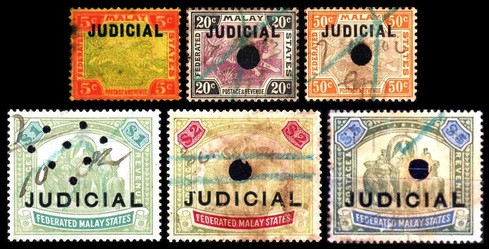 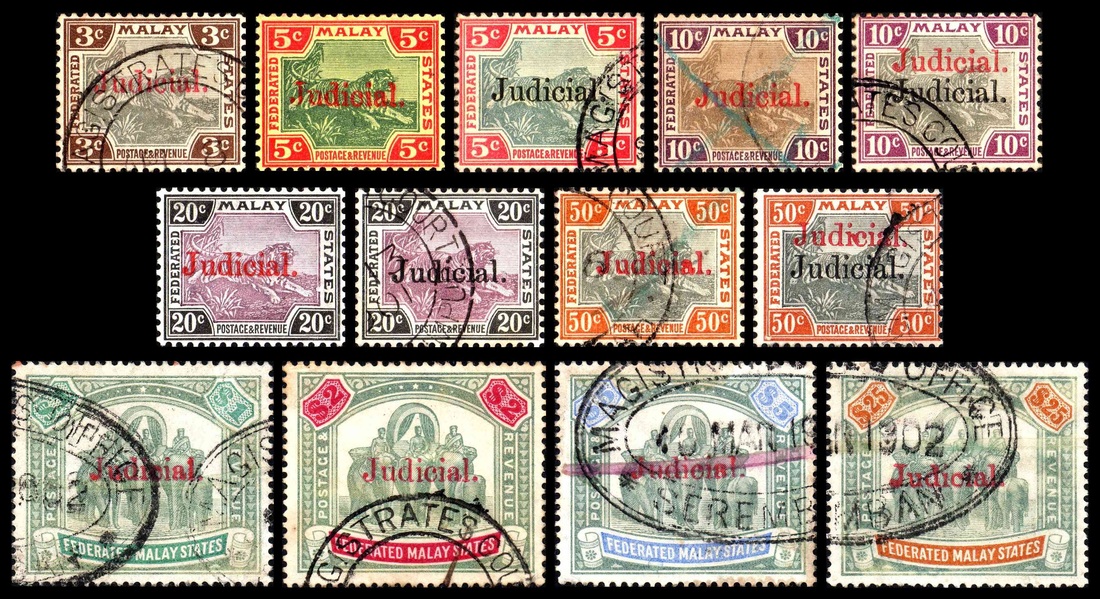 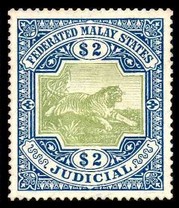 1. All FMS Judicial stamps issued from 1903 onwards were printed (typo) by De La Rue using their key plate technique.  The vignette plate showed the iconic leaping tiger image used for the postage and revenue issues, and a new duty plate was introduced in vertical format, inscribed with the country name at the top and JUDICIAL at foot.  The designed measured 25½ x 30 mm and was set in sheets of 60.

3. The first printings were printed on Crown CC watermarked paper.  In due course this was replaced with Multiple Crown CA paper, and subsquently Multiple Script CA.  It is not known at what exact point the different watermarks were introduced, but comparison with other large-format De La Rue productions of the period suggests that Multiple Crown CA was used from roughly 1907 to early 1921, with 1903-06 printings on Crown CC paper and printings from late 1921 onwards on Script CA.  If this is correct, then based on the available printing data (see schedule below), all values of the set should exist on all three watermarks except the 3c (CC and MCA only) and the $50 and $100 (CC only).

4. Printing data for all British Colonies stamp issues from February 1922 onwards are documented in the Crown Agents Requisition Books (now housed in the British Library).  These plus the earlier printings of the FMS Judicials are listed by Reeves in his 1989 book Federated Malay States - The Printing of its stamps & postal stationery.  Reeves does not number the printings or specify Requisition numbers, and does not indicate whether his dates refer to printing or dispatch.  He does however include exact quantities printed for each value in each printing, which for reasons of space I have not reproduced here. 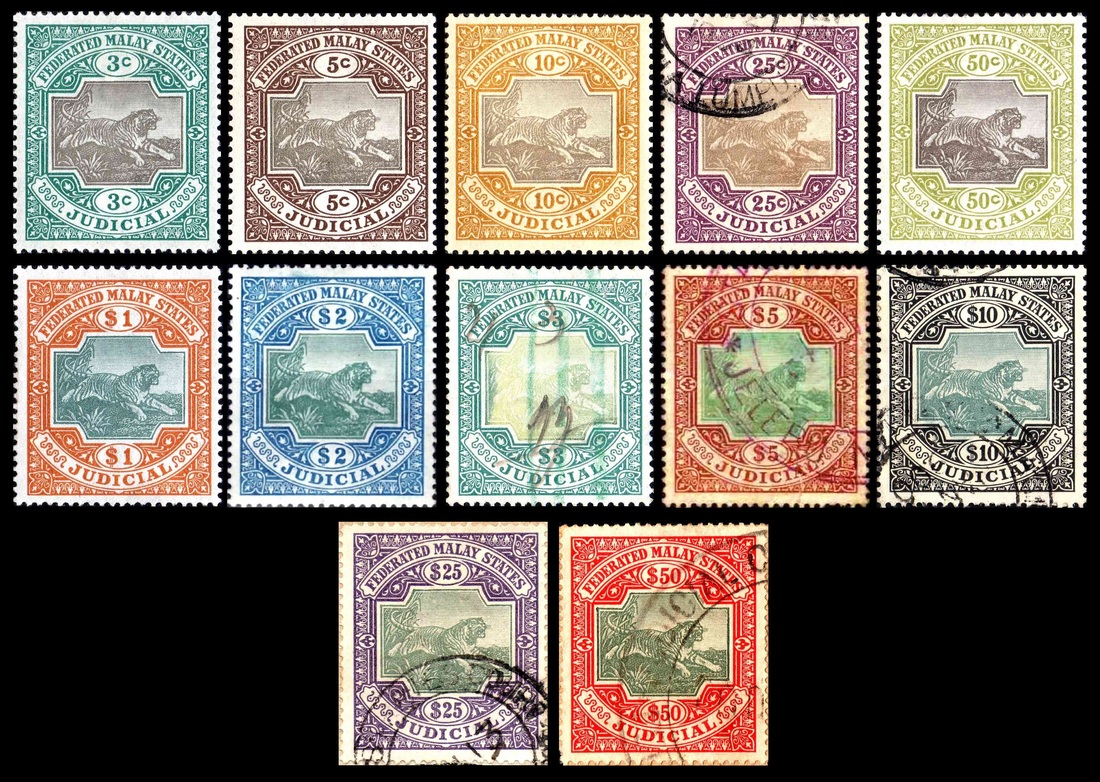 Notes:
1. The 20c and $100 values are known from the printers' archive material and requisition records, but I have not seen either of these as issued stamps.  The existence of several documents bearing large multiples of the $50 value has led some specialists to suppose that the 17 sheets of the $100 sent to Malaya in 1906 were in fact never issued.
2. Some shade variation can be found on many values of this series as well as J61/86.  The green centres of the $1 to $50 can sometimes appear grey due to washing or fading.
3. Tan lists a $25 red and green and a $25 green and orange, the latter also being listed by Forbin.  I believe these are errors, though they may refer to the third of the three DLR essays for this issue, which was denominated $25 and printed in green and orange (see General notes on the Judicial key type issues, note 2).
4. An example of the $25 with sans-serif SPECIMEN handstamp (Samuels type D9a) was sold in the 1997 auction of the Malaya Study Group.
5. An example of the 50c with a cancel dated 1900 was described in the 1997 auction catalogue of the Malaya Study Group (lot 42).  It is possible that the cancel was set with the wrong year plug since the print records clearly point to an issue date no earlier than 1903.

Notes:
1. The existence of the stamps in brackets is known from the Crown Agents Requisition books but I have not seen them as issued stamps.
2. Some of the MCA printings and all the Script printings of J61/86 seem to be on chalk-surfaced paper.
Labels

L1/4
1916.  Arms of the Federated Malay States on banner over war orphans and widows.  27 x 45 mm.  Shields in corners each bearing the name of one member state of the FMS.  Rough perf 12.  No watermark.  No value indicated.  The inscription at foot differs between the four types.

Note: according to The Postage Stamps of the Federated Malay States by W A Reeves, the above stamps were issued on 17th February 1916 and withdrawn in 1918.  All cancelled examples I have seen are dated within this period.
Railway Newspaper stamps

Notes:
1. C L Harte-Lovelace first recorded these stamps in the February 1919 edition of the Bulletin of the Fiscal Philatelic Society.  He lists only five values (1c, 2c, 4c, 7c, 10c) and states that the issue date was 1st January 1918, though the source of his information is not given.  The 5c, 20c and 30c were presumably added to the series later, and have the inscriptions in a slightly different font from the original five values.  The latest identifiable cancel hitherto found on this issue is dated 1933.
2. A wide range of minor varieties may be found due to inconsistencies within the sheet.
3. Tan also lists 9c, 13c and 15c values for the above set.  I have not seen these, and suspect Tan has confused them with the later Malayan Railway series, which does include the 9c and 15c values.

N11 (black and white image from Tan)
?1930s.  New typeset design in wider horizontal format, inscribed F.M.S.R. at each side.

In 1948 the FMS Railway was renamed the Malayan Railway Administration, which in turn became Keretapi Tanah Melayu on Malaysia's independence in 1962.  Newspaper stamps issued under these names are listed on the BMA / Federation / Malaysia page.
Revenue

Note: Tan states that the watermark can be found both upright on sideways on both values, which is correct for the MCA issues (R1/2a) but not in my view for the Script printings.  There was only one Script CA printing of the $100 so it seems unlikely that two different watermark orientations would exist.  I have not seen the $250 with Script wmk sideways.

Notes:
1. The 50c has not been recorded without REVENUE overprint.
2. Tan additionally lists the 20c and 30c values overprinted Revenue but I believe this is an erroneously listing for the unoverprinted stamps.
Revenue usage of Postage stamps
Note: for ease of reference, numbering follows the Stanley Gibbons Part 1 catalogue throughout this section.  Values listed here are those recorded as having been used for revenue purposes. 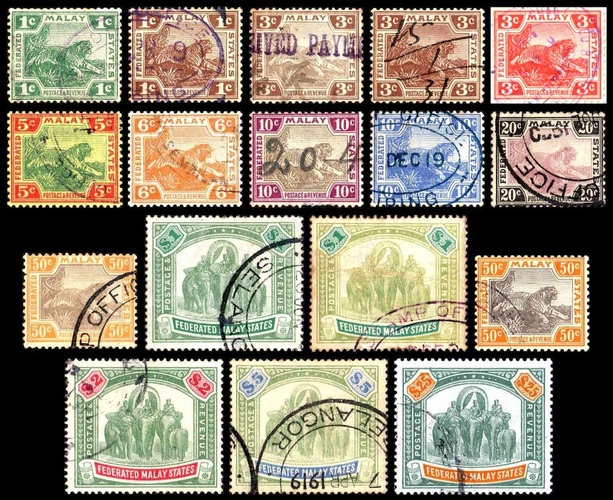 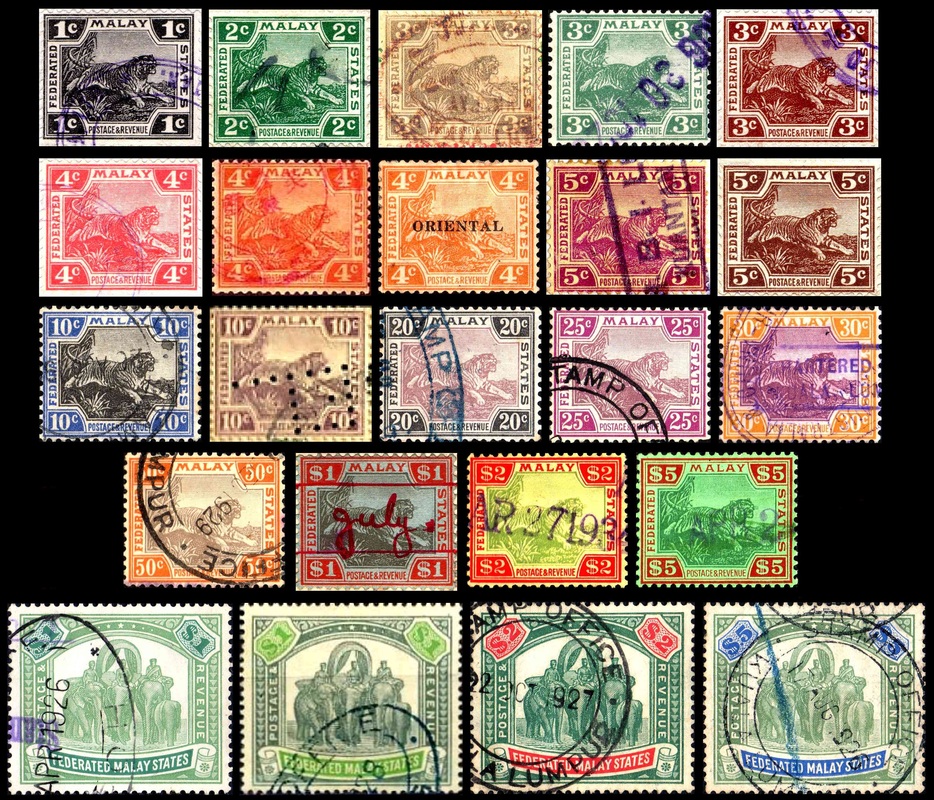