On this page are listed interesting revenue-related things which have caught my eye, including (but not limited to) stamps which are not listed in the catalogue.  Such things will end up on this page if they concern territories for which I have not published a full catalogue listing on this website.  For an alphabetical list of the territories which are covered on this site, click here.


Territories and topics covered in this section
Algerian Revenues 1980s-present

Horizontal revenue key types of Algeria plus new vertical type
Duston lists a number of revenues printed using the horizontal key type shown above left.  I have seen a number of additional values not listed by Duston, as well as a number values in a vertical key type which seem to have been issued since 2010.  The stamps I have seen are listed below.

Three types of Consular adhesives listed by Feltus had new values issued in the 1980s-90s, and ten completely new types have appeared between then and now.  Some types can be found with different inscriptions specifying particular consular fees.  Here is a brief checklist of what I have found so far.
​
a) Issues inscribed Arab Republic of Egypt (or AR Egypt)
b) Issues inscribed Egypt
In due course I hope to publish illustrations of all these stamps together with translations of the inscriptions.  I would be very grateful to any reader who can supply scans of stamps I have not listed.
Great Britain Foreign Office King George VI provisionals
In a footnote on page 53 of United Kingdom Revenues (5th edition, 2010) John Barefoot states: "Consular Service 4/- and 10/- overprinted (handstamped?) FOREIGN OFFICE are...reported".

The above image confirms the existence of these two values - both used with Foreign Office London cancels featuring the royal coat of arms, but with no date visible.  The overprint measures 17 x 7 mm and is blackish purple in colour.  It has been placed carefully on the stamps to cover the original inscription, but has the soft-edged feel of a rubber handstamp, which I suspect is what it is.
Jordan Consular / Passport stamps 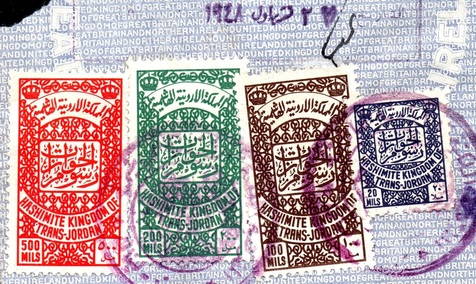 Ross and Kaplanian list two sets of Consular adhesives featuring a calligraphic inscription (al-khidmat al-qunsuliyah = consular services) in a rectangle.  The first set - dated 1947 - has the English inscription Hashemite Kingdom of the Jordan in capitals at foot, with currency in mils and L.P. (=Palestinian (sic) pound).  The second set - dated 1951 - has Hashemite Kingdom of Jordan (not the Jordan) and currency in fils.

The stamps shown here are from an unrecorded third type, which because of the country inscription must pre-date the first two.  It reads Hashimite Kingdom of Trans-Jordan, with the spelling Hashimite not Hashemite as found on the first Palmyra key type series (= R&K 106/113).  The central calligraphic inscription reads rusum al-jawazat (= passport fees).

The image above shows four values of the set used on a piece dated 1948.
Tunisian Revenues 1970s-present
A number of Tunisian revenue adhesives have come to light in the years since 2000, when the second edition of Duston's excellent catalogue was published.  Here is my first attempt to list those I have seen.  All the stamps are based on the three key types shown below.

Large types A to C for (left to right) Formalité, Dimension and General-purpose

Small types A to C (top to bottom) for C.I., Consular and General-purpose respectively
- Type A: inscribed with the country name in Arabic at top and in French at foot
- Type B: a redrawn version of type A with no French inscription at foot
- Type C: new type with coat of arms now at right and value at lower left, background composed of Arabic inscription Republic of Tunisia in diagonal lines

Types A and B are found in large and small sizes; type C in large, medium and small.  Type A stamps exist watermarked either AGT (early printings) or ITVF.

So far I have seen the stamps listed below.  Stamps are given alphabetically by appropriation, with general-purpose revenue given first.

Finally, Duston also lists Passport stamps in the type A (small) design denominated 2d, 6d500 and 23d, but I have not seen these.