Notes:
The 20-shilling value of this set is known only from the black and white illustration shown here, and the colour and watermark are therefore unconfirmed.  If the stamp is shown to have a watermark, it will be re-classified as #30.
Earliest recorded use – 17th April 1943 (#1),
1st December 1943 (#3).
Erler additionally lists the 80c and 1s for this set but I have not seen these values without watermark.
c1945-50. “SOMALIA INLAND REVENUE” key types as before with new values added. Watermark multiple “OTA”, sideways on shilling values, normally reading upwards as seen from the back of the stamp. 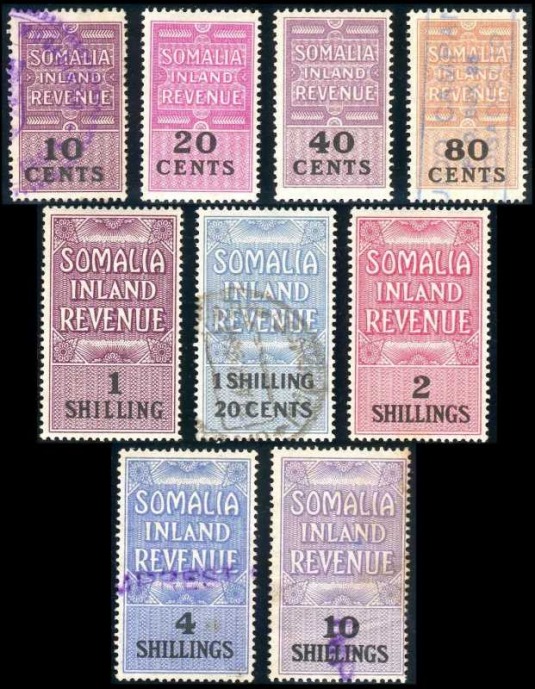 Note: no dated examples have so far been recorded.

The issues under this heading are attributed to Somalia by both Erler and Luconi & Caso.  I am unclear why these writers describe them as issues for Somalia only, when they could equally well have been used in Eritrea, both territories having the East African Shilling as their currency at the time.  I would be very grateful to any reader who can offer documentary or other evidence for the use of these stamps in either Eritrea or Somalia.  Until such evidence emerges, I will follow my predecessors in attributing them to Somalia.

Notes: no dated examples of this issue have so far been recorded. A date of c1943 is presumed on the basis that in this year the INFPS organisation dropped the third word (Fascist) from its name to become the INPS (see listing below).  Erler gives a date of 1946 for all the stamps listed on this page.

S6-7 (no other image of S7 available)
a)    “I.N.P.S. E.A.S.” in seriffed letters 2mm high. “2.40” in similar font on small format, or in bold sans-serif font 4½mm high on large format. Three bars through original value, running across the whole stamp.

S6. 2s40c on 10c blue (small format) (red)
S7. 2s40c on 80c greenish grey
(large format, king facing left)
Note: Barefoot lists the 2s40c on 10c in two separate places - as as Italian East Africa Insurance BF1 on page 89 and as Somalia Insurance BF3 on page 91.  The two listings are identical except that the IEA stamp is described as being overprinted 'I.N.P.' (without the final S) and surcharged in black and red, both of which details seem to be errors.