Following the British Occupation, Somalia reverted to Italian control on 1st April 1950, and then became independent in 1960.


Printers:
Except where otherwise stated, all stamps are believed to have been printed (photo) by the Government Printing Works, Rome.  They were responsible for almost all the postage stamps of Somalia during the ITT and Republic period, and their imprint appears on many revenue issues. 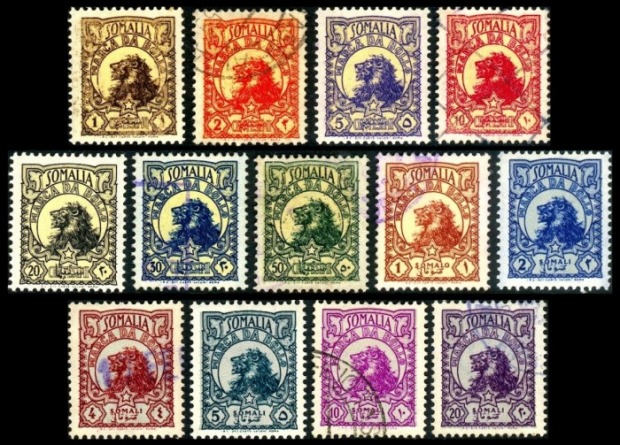 The date of 1950 is given by Bussoli, and can be supposed from the fact that all the other types of adhesive stamp (postage, airmail, parcel post and postage due) for ITT Somalia were issued between April and May of that year.

Note: Bussoli and Unificato also list a 50s red, but I have not seen this.

a) 'CENT.' in capitals, with figures of value 4½ mm high on line below

b) 'Cent.' in mixed case, with figures of value 2½ mm high on same line

Notes: The 50c on 2c stamp illustrated here is from the Unificato catalogue, and seems to show an antique-style font in the surcharge.  I have not seen an example of this stamp to be able to confirm this.

#91 and #95 (#95 illustration from Unificato)
1956 (according to Bussoli).  Somali lion as before but watermark changed to multiple stars, 30c in new colour.

Notes: the star watermark was first used on Somali postage stamps in 1955 (Third Somali Fair issue).  Bussoli also lists a 1s, 2s and 4s in this watermark; Unificato lists the same values plus a 5s, 20s and 50s.  I have not seen any of these values.

a) Inscribed with value only (no country name or appropriation specified), in Arabic at top and in Italian at foot

b) Inscribed 'MARCA DA BOLLO / SOMALIA', with value in Italian at lower left and in Arabic at lower right

Notes: according to both Bussoli and Unificato, the Lion stamps are wmk winged wheel, though I am unable to confirm this myself.  Bussoli and Unificato also list the following surcharges on the Lion revenues, none of which I have seen: 30c on 5c (Unificato only), 50c on 5c, 1s on 2c, 1s on 5c (surch in red), 2s on 2c, 2s on 5c.

Note: the imprint on the 50s and 100s reads 'IPS - ROMA', while on all the other values and all previous issues it reads 'IPS - OFF CARTE VALORI - ROMA'.

Barefoot lists a 10s red in the national emblem design, though I have not seen this.

The stamp shown here was sold on eBay in 2010.  It is similar to #161 but printed in a single colour on unwatermarked paper.  This could be a crude government reprint, but equally it might possibly be a forgery.

Note: the imprint piece shown here proves that #201 was printed by De La Rue.  I presume that the other values were also the work of DLR, though this cannot be confirmed at present.
Labels

So far these stamps have been recorded only as singles, but the rouletting at left suggests that they may have been issued as two-part pairs.  If so, it is possible that the two halves of the stamp were divided when the stamp was used on receipts, one half being on the customer's copy and the other on the retailer's copy.
Stamp paper

This paper is known only from the single partial example shown here.  Other values may exist.
Mogadishu Municipal

Notes: The earliest known usage of these issues is a 1952 document bearing M1 and M11 in combination.  M6 and M7 were used on vaccination certificates against smallpox and yellow fever respectively.  M12 is known only from Alfano's catalogue.