Acknowledgments for this section can be found on the main Southern Africa page.

Currency
All the Entertainments Duty stamps of Natal are inscribed bilingually, with English and Afrikaans appearing on each stamp.

1917.  Rouletted.  No watermark.  Two different types of the design exist (see note below). 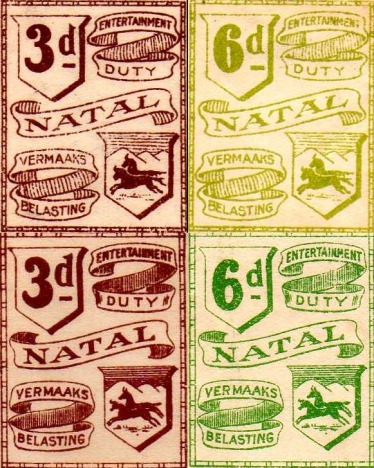 3d and 6d showing Types A (top) and B (bottom)
Notes:
1. It seems likely that types A and B represent different printings rather than being from different positions in the same sheet.  The two types are easily distinguished from each other, type B having generally a better executed design than type A (see enlarged illustrations at right).  In type B the scrolls have a more regular shape than in type A, the wildebeest are better defined, and the lines of shading are finer and more closely spaced.  Additionally the letter 'd' in the value tablet has a serif pointing right (A) or left (B); the letters 'AL' of NATAL are joined only in type A; and there is shading on the scroll either side of the word DUTY only in type B.
2. Dickson & Palazzo (2006) suggest that these stamps were issued in 1917, since Natal's first Inspectors of Entertainments Duty were appointed on 1st October in that year.
3. Shades of all values are known.
4. Barefoot also lists a 4d but I have not seen this. 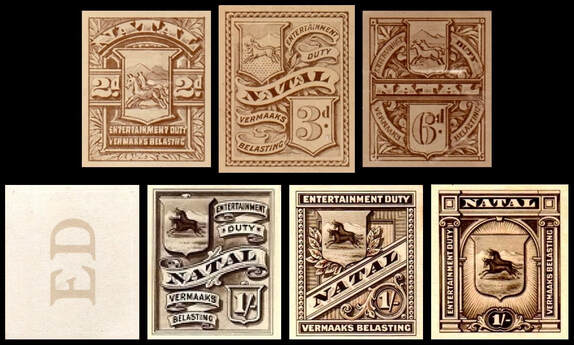 Unadopted essays by Bradbury Wilkinson (top row) and De La Rue, including 'ED' watermark essay
In the autumn of 1923 the South African High Commission in London invited a number of printing firms to submit new Entertainment Duty designs, and to quote for printing a total of 500,000 stamps denominated between 1d and 1s.

All the essays submitted by Bradbury Wilkinson and De La Rue were rejected.  It is not known which other printers submitted designs, and no other surviving essays are known.  It seems likely that the successful design was by Harrison, since a part set of stamps in the accepted design is known overprinted HARRISON'S SPECIMEN (see illustration below).  These are printed in issued or near-issued colours and are perforated 13¾ all round, and are presumed to be essay samples or colour trials.  If this is correct, then it seems likely that the issued stamps perforated 13¾ (E11/18) are also the work of Harrison. 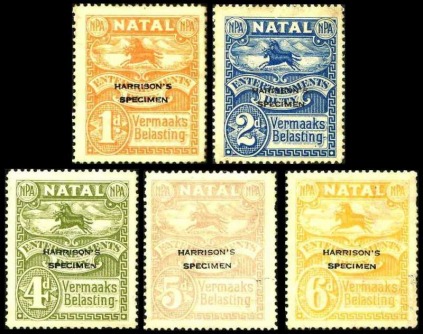 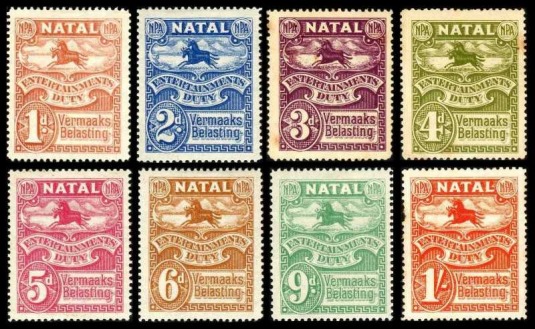 Notes:
1. Stamps of this design exist in no fewer than nine different perforations, which suggests the work of a number of different printers.  Only De La Rue and Harrison are known with certainty to have been involved, and the correspondence of printers to perforations has not yet been established.  Surviving records from the De La Rue archive shows that the South African High Commission kept the printing plates and put each new requirement for stamps out to tender, and therefore it is conceivable that each contract was won by a different printer with no continuity.  Dickson & Palazzo suggest that the printing of Natal Entertainment stamps may have been transferred to the South African Government Printer in the 1930s, along with the printing of all South African postage stamps.
2. Numbers have been set aside in the listing below to allow for additional values in each of the different perforations.  Perforations are quoted to the nearest quarter as an aid to identification.
3. For the 7d and 2s3d in this design but perf 11, see E78/79 below.  Barefoot additionally lists a 10d yellow value, which I have not seen except from the Pretoria printing (see my E130 below).
4. Imperforate plate proofs are known of E11/18, though not of the later additions (E78/79). 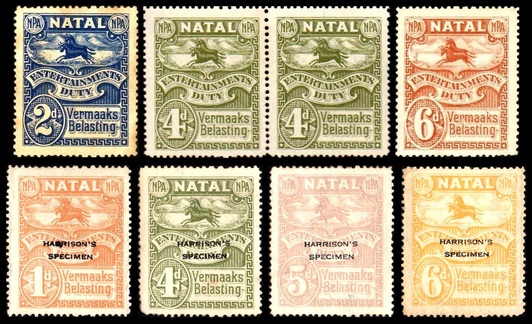 Notes:
1. These stamps are perf 13¾ all round, except for three much wider perforations (gauge 11) in the horizontal rows.
2. The fact that stamps of this perforation can be found se-tenant with the ordinary perf 13¾ stamps shows that they are not from a separate printing but from a single vertical column on the normal sheet.
3. The existence of Harrison's samples in the same perf (illustrated above) suggests that the perforating comb included these wide perforations from the very beginning.  It is likely therefore that all stamps known in perf 13¾ should also occur with this compound perf. 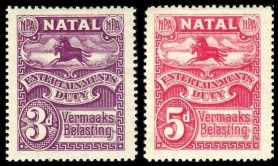 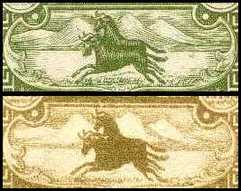 E51. 1d brick-red
E52. 2d blue
E53. 3d deep purple
E54. 4d olive-bistre
E55. 5d rose
​
​
Notes:
1. Stamps of this perforation have a coarser impression than other printings (see illustration at right), and a narrower margin between the design and the perforations.  This suggests a different printer and/or method of printing.
2. An example of E55 is known on a 2s6d cinema ticket, proving that these stamps were issued before 1940.
3. The 7d value formerly listed with this set has been deleted since the perforation of the example I saw has been confirmed as perf 11 (see E78 below). 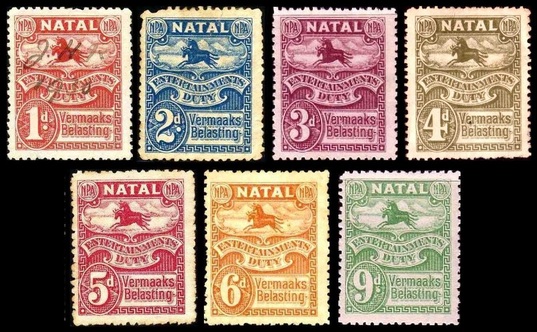 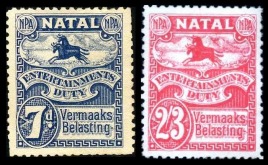 Note: an issue date of 1940 is suggested by the fact that a 7d rate was introduced in that year. 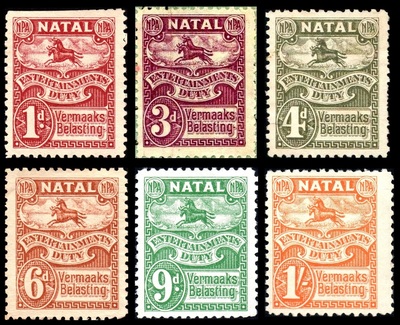 The need for the above surcharges was probably occasioned by the rate change of 17th June 1940.  Ordinance No 9 withdrew the 2d and 5d rates, so stamps of these values were surcharged to provide other values.  At the same time a new 7d rate was introduced, while the existing 6d and 1s rates continued in use. 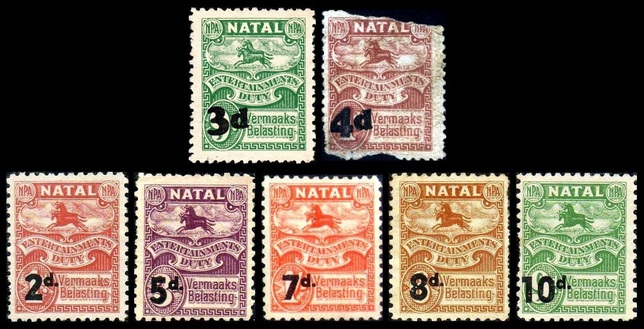 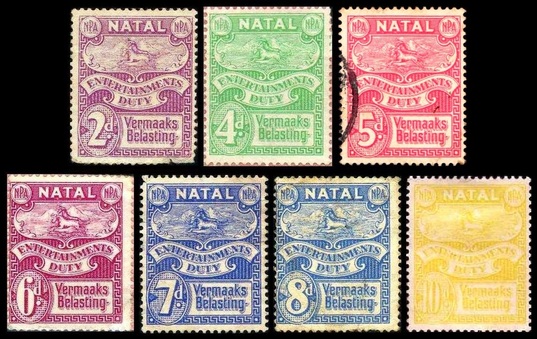 Notes:
1. The date of issue is unknown, but it must presumably pre-date the introduction of decimal currency in 1961.
2. The 4d value is known only with the one shilling surcharge but presumably was originally issued without. 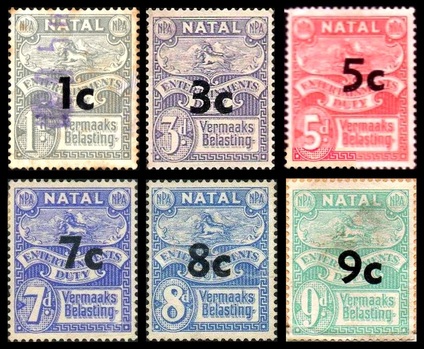 According to Palazzo (2010), these stamps were issued when Ordinance No 28 of 1960 came into force on 14th February 1961, providing for a decimal duty on cinema tickets.
The 1d, 3d and 9d values are not recorded without surcharge.


Note:
The two overlapping examples of E152 illustrated above right have what appears to be a surcharge R0.50c (or possibly R1.50c) applied with a rubber handstamp.  The handstamp runs across both stamps together in the manner of a cancel.  I have not seen another example and would be glad to hear from any reader who can shed more light on these.
Previous page: South Africa Entertainments Duty (Cape, OFS, Transvaal)
Next page: South West Africa / Namibia
Back to Southern Africa main menu